San Diego’s most transcendental new band, Birth, purveyors of a form of vibrant and electrifying progressive rock that moves beyond time and space itself – are about to drop their debut record. 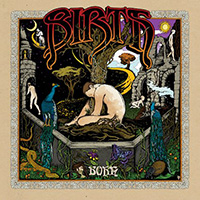 I’ve watched a metric ton of sleazy 70s grindhouse film, and by the sound of it, the guys in Birth were in the next room, not watching but influenced by the soundtracks to those films, while noodling on their instruments. Subconsciously ensconced in the rich, fuzzy rock of the era. A time of musical exploration and visual exploitation.

Yet far from the trappings of retro chic and fashion-aligned classicism, these five celestial serenades stake their claim in a different headspace to most other exponents of the form. Certainly it’s true that many of the audial shapes manifesting themselves here – the exploratory jazz-rock diversions, Mellotron and Hammond-abetted textures and the rich melancholia of the song-writing – may recall moments from progressive rock’s past, and the listener may be forgiven for losing themselves in a gatefold-sleeved reverie.

Nonetheless, this is a band which was thrown into life via the constrictions and temporal shifts of a global pandemic, as well as one which has largely set about chronicling a reality in which the surrounding world appears to be hurrying its own demise.

Birth evolved from Astra, whose two albums for Rise Above Records – 2009’s The Weirding and 2012’s The Black Chord – had already reinvented classic sonic textures and mind-melds in lucid and intoxicating style.

It would be easy to call this something like psychedelic stoner rock – so I’ll do that. Yet, that wouldn’t justify the complexity of what is at hand here, on Born. See, this is a multi-layered piece of work that really takes several dozen listening’s to fully absorb, and I feel that even then – Born will be the sort of gift that keeps on giving year after year. Each time I’ve sat down with a cup of tea (What? I like tea, alright? Piss off!) and really paid attention to the detail, I’ve discovered something new. A new nuance or a passage I hadn’t picked up on prior.

Through all the fuzz and keys, there are some fantastic guitar segments and solos on this record. An old-time vibe that makes me feel high as a kite while deadpan sober. Close your eyes and drift away. The songs are brilliantly structured – again, layered, to a degree that everything flows so peacefully along, like being adrift down a Scandinavian fjord. In a canoe with a paddle and a reluctance to dip the oars into the drink below.

The danger with this collection of fine tunes, is that they’ll leave you in a mindset to do fuck all – proper fuck all. As in to kick back, reclined with feet up – and just reflect on the day. On the purpose of being. Existentialism. A meditative state of relaxation. Such is the power of music – it can alter mood and mindset. Don’t bring Born to the gym.