Any time the Dropkick Murphys drop a new record, is time to rejoice – and with Turn Up That Dial, you’re not getting anything new but you are getting the soundtrack to good times. 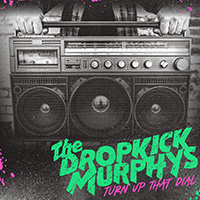 Turn Up That Dial is the tenth studio album by Boston’s Dropkick Murphys – their first since 2017’s 11 Short Stories Of Pain & Glory. As always, listening to a Dropkick Murphys album brings healthy dosages of joy. Good times by way of drinking songs. How stereo-typically Irish. (see what I did there? Oh come on!) Celtic infused punk rock was always meant to be about letting loose and enjoying yourself, and the Dropkick Murphys have been delivering this vide throughout their entire career. Well, unless they’re singing about serious stuff, which happens on occasion.

There are certain bands, like say AC\DC or Bad Religion, Rolling Stones – and Dropkick Murphys, that are fairly predictable when it comes to releasing new material. Before ever hitting that play button, we pretty much already know what to expect. What we’re going to get. Paint by numbers musicians that have honed their craft to the point that they no longer feel the need to stray too far off the paths they’ve laid for themselves. That’s not a knock in any way, just a long-winded way of saying that what you’re getting here, is another Dropkick Murphys record. Everything you’ve loved on their past records, its all here. Yet that’s it. That’s yer lot!

Last year, the Dropkick Murphys dropped a digital single that featured the fantastic Mick Jones Nicked My Pudding and, if there had of been a physical copy, James Connolly on the b-side. Wait! Editor’s note! There now IS a physical copy, so yeah. Anyway! The title track, the first on the album, is one of the better pieces in the collection. Upbeat and ripe with energy, tin whistles and sing-along bits like all the best Murphys tunes have. While H.B.D.M.F (Happy Birthday Motherfucker) aims to drag down and roll dirt all over adults celebrating their birthdays, a lot like how they did Christmas dirty on their Signed And Sealed In Blood record, and not unlike that track, it’s a silly and funny bit of filler. Towards the tail end of the album, sits City By The Sea, which is your traditional slower Murphys ballad. Cue the mention of Fenway park and of being raised well, like I said – these boys are predictable.

Back in the day – before the pandemic, we would insult people by insinuating that they couldn’t start a punch-up in an Irish pub. Now we yearn for the chance to see the Dropkick Murphys, in a pub, all of us ready for a good ol’ timey donnybrook. It’s funny how the times change. Like the nine records that came before it, Turn Up The Dial badly needs a stage show to accompany it. These are party songs, built for crowds. Gatherings. A piss-up of epic proportions, and hopefully we can all get back to that and soon.

Until then, we have time to learn the new songs, so we can all joining together for a sing-song with the Murphys when all this shite blows over. How I wish you were here, sing the lands on the final track, I Wish You Were Here – and that is a sentiment we all share, I believe. How you can point the finger at Mick Jones for swiping your pudding, then turn around and steal that song name off of Pink Floyd, is a tad hypocritical though, wouldn’t you agree?

Pre-orders are available right now from Cut Loose Merch, in various vinyl versions, on Compact Disc and digital too. There’s also a strange wee oddity to be had, if you’re so inclined. A cardboard bluetooth boombox featuring artwork inspired by the Dropkick Murphys’ Turn Up That Dial album. Just make sure it’s not raining when you lug it down to the park – and definitely don’t spill your beer on the damned thing.

For Fans Of: The Clash, Flogging Molly, The Mahones