It would seem, that Behemoth’s Nergal is once again in hot holy water in his native Poland over accusations of blasphemy 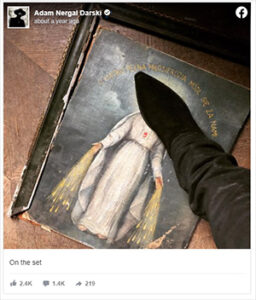 In what is the latest of a long running series of run-ins with the political and religious leaders of Poland, Nergal, has seemingly been fined the equivalent of $4000 USD and handed a court fee for close to $1000 USD over a photograph he posted to his social media.  The photograph in question, shows the musician stepping on an image of the Virgin Mary, which allegedly has upset the populous of Poland – one of Europe’s most religious regions.

Original reported by Notes From Poland, Nergal has chosen to contest the fines, refusing to plead guilty, and is expected to now face trial over the photograph. As silly as this all seems, under Polish law, Nergal could even face a jail sentence of up to two years for his actions. However, his previous charges were all eventually dismissed.

The photograph in question, was apparently posted to Nergal’s Facebook page more than a year ago, and is only now causing controversy.

“In the course of proceedings, the aggrieved parties were questioned and they clearly stated that their religious feelings were offended,” said the spokeswoman for Warsaw district prosecutor’s office, Aleksandra Skrzyniarz. Prosecutors also consulted an expert in religious studies, whose “opinion clearly concludes that treading with a shoe on the image of the Mother of God is an offence against religious feelings,” Skrzyniarz added.

To coincide with all of this, another blasphemy case against Nergal has been re-opened. This case, states that the Polish government took a piece of Behemoth merchandise as mocking the eagle on the country’s coat of arms. The piece in question, depicts the nations symbolic coat of arms, with “Satanic symbols” splashed across it. He also upset the powers at large by calling the Catholic church a murderous cult.

“In case some of you are wondering what’s going on with my legal cases while we’re on quarantine… The Polish emblem blasphemy has just been reopened and we are going through this bullshit again in June” said Nergal on his social media pages.

One thing is for sure, freedom of speech does not exist in the nation of Poland.

In other Behemoth news, it would appear that a new recording is in the pipeline. The follow-up to 2018’s fantastic Loved You at Your Darkest appears to be nearing completion and gearing up for a launch sometime this coming fall.  Behemoth have also rekindled their contract with Nuclear Blast.

“Nuclear Blast has been a household name in metal for decades, and Behemoth has been part of that long and illustrious history,” said vocalist and guitarist Adam Nergal Darski. “But now is about the future, and we look forward to beginning Behemoth’s next chapter with a refocused and revitalized team at Nuclear Blast.”