What strange times we are living. How bizarre our lives have become. Perhaps some day in the future, somebody will write about the days we are living now. They weren’t the best of times, maybe not the worst of times. But they most certainly were odd. So weird that we can’t go outside or hang out with our friends. That we can’t go out to the bar anymore, or even catch a live concert. The arts are on hold. This isn’t the future we were promised. No flying cars and no hoover boards. None of it. Instead we have latex gloves and nasty face masks to breathe through. Cops are still murdering civilians too. In short, the future isn’t what it was cracked up to be.

At least we can sit home, in the May heatwave and sweat our naked asses off while the Dropkick Murphys rock Fenway Park. To nobody. With a seated capacity of 37,731 – and room for closer to 50, 000 once the floor is opened up. Of course, those stats are from the days when we could go out and see live bands. This is it, folks. The post-apocalypse as seen in all those zombies films we grew up watching. The Dropkick Murphys are playing a 50, 000 seat venue – and there isn’t a soul in attendance. No doubt abut it, this is weird.

Why then, must the cameraman zoom out to the aerial shot of, well, nothing. Just the Murphys and their gear. Drones buzz around like giant annoying bees as the home audience is given a glimpse of the Boston skyline. Empty seats bring back haunting memories for myself and those of my city. It was like watching the Montreal Expos again. It was quite an odd spectacle, watching the lads stroll around an empty stadium as if on a stage, playing to other humans. I imagine it was as strange for them too.

See also : A celebration of Pouzza festival ‘s past

“By state regulations we couldn’t have more than 35 people here,” said Ken Casey, “this is something that should have taken a crew of 100 people”. He then spoke briefly, praising all involved in putting together the nights music. The hard work and dedication of the skeleton crew that to double-shift and preform tasks not normally their own. “Lets keep in mind the 100,000 people we’ve lost in America, and everywhere else” began Casey, as he announced the next song. Amazing Grace. 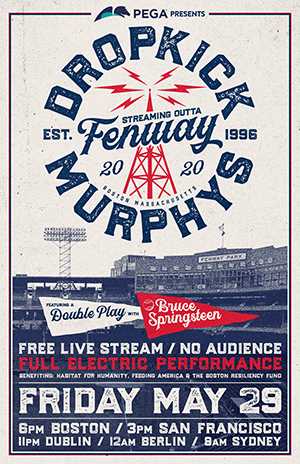 By this point, the Dropkick Murphys had serenaded the empty Fenway Park with songs such as The Warrior’s Code, which was dedicated to “Irish” Mickey Ward. At this point, from my sofa in Montreal – I must point out that Montreal’s Arturo Gatti beat Ward. Twice. Rest in Peace Arturo. We might be in a pandemic, but the rivalries between our cities must remain intact. There was a pretty rough cover of the Johnny Thunders song, You Can’t Put Your Arms Around A Memory. I’m not baggin’ on the lads, but that wasn’t so hot. Great song, though. That was followed by Mick Jones Nicked My Pudding – the newest Murphys track. And then Johnny We Hardly Knew Ya.

The special guest of the evening eventually made an appearance – The Boss. The one and only Bruce Springsteen. Joining in, albeit from afar, for a hair-raising rendition of Rose Tattoo. Following that, the Murphys and The Boss performed a Springsteen track. At this point, the crowd would have been in full riot. Screaming at deafening decibels. Instead, we got a Boston skyline shot, and a few words from Kevin Bacon. This is so strange. All of it. And if that wasn’t enough to get the non-existent fans in attendance rowdy – they then played Shipping Up To Boston.

The Dropkick Murphys ended their Fenway Park appearance with a rendition of Until We Meet Again. How perfect. With music lovers the world over in concert withdrawal, singing Well, it might be a long time,’til we raise another glass. You can rest assured that next time, we’ll have ourselves a laugh. We’ll meet again, don’t know where, don’t know when. We all had a good time, and we’re sad to see it end. There isn’t a better way or summarizing the night than that.

The show was to raise money for three charities. Through donations. Those being the Boston Resiliency Fund, Habitat For Humanity and Feeding America. With help from the Boston Red Sox Foundation. Donations can also be made through the band at this location.

Surely, this wasn’t the best performance of the Dropkick Murphys career. Maybe not the worst either – I don’t have the facts, stats or evidence to back that up though. Anyway, it sure beats watching musicians live streaming solo performances from their bathrooms and kids bedrooms. As great as those weird streams have been for moral – and provided the fans with something, it sure is nice to see a full band. And at least the beer prices are affordable – and the hot dogs too.

This was a night of live music that the world really needed. To the Murphys, I tip my hate. Well done lads. Even if you are Bruins fans.