Well, this is different if nothing else.

Remember back in the day, when musicians started fusing metal and hip hop, to create rap rock. Or Nu metal or whatever the term of the day was. Trying to cash in on the sounds they thought the kids would be into. It would seem we’ve come full circle. 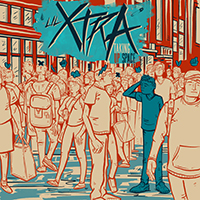 On “Taking Up Space”, Lil Xtra is pulling together lil’ bits of this and some of that. Sometimes we have Emo songs, with slow rock guitars and sappy lyrics. Then we start screaming about angry teen angst type things. Then we go full gangsta. Fuck this. Fuck that. Pills this, weed that. Which is it?

At times, he sings like Rise Against’s Tim McIlrath. Silky smooth. Other times I feel like I am listening to a A Day To Remember record. Then Linkin Park style rap rock. And on to a Post Malone style pop or trap track.

There are several really strong moments. Lil Xtra is certainly talented – there’s no debating that. He sounds like he comes from a place of hurt and sadness. I don’t want to bring him down further and hope I don’t come across as dismissing. Several times he raps about his demons, or his dark passenger. Dragging up bloody memories from that creepy Dexter television show. I just think there needs to be a little more separation. A reduction of the ingredients to the soup. Too many eggs spoil the omelette. Sometimes less is more. Feel me?

“Music has helped me in so many ways in my darkest times. I’ve always wanted to share that experience with my own music,” says Clayton Roney. Better known as Lil Xtra.

Honestly, Lil Xtra seems confused to me. A product of the streaming generation, where everything is available at the touch of a button. Scenes don’t exist anymore. Its all a musical blender – some of this, a sprinkle of that. And to be quite frank, I’m not sure how I feel about that. This record is conflicted. “Taking Up Space” is the soundtrack to Lil Xtra finding himself as a person.

In my day, we called that a jack of all trades. Proficient at a lot; master of none. Part of me feels Lil Xtra should concentrate on one or two styles, and create his own path that way. Then again, the other side of my brain is wondering if he isn’t perhaps on the ball here. Smart to be pulling ears from all sides of the pie chart. Logically though, this is too varied. All over the place. As a result, the album doesn’t have much of a flow to it. Are we rocking out or are we sipping on cough syrup, codeine with a little Sprite mixer.

Much of this record feels heavily influenced by Post Malone. Who himself started off playing rock music. Moving towards trap and pop in search of a paycheck. Sadly, in today’s world, cash rules everything around us. But who is the market here? Are people going to be down with such contrast in sounds? Maybe they are – and I’m way off base here. Perhaps this is the way. The new sound. I reserve my doubts, though.

How many artists have the word Lil in their name now? Have we hit the million mark yet? Lil this. Young that.