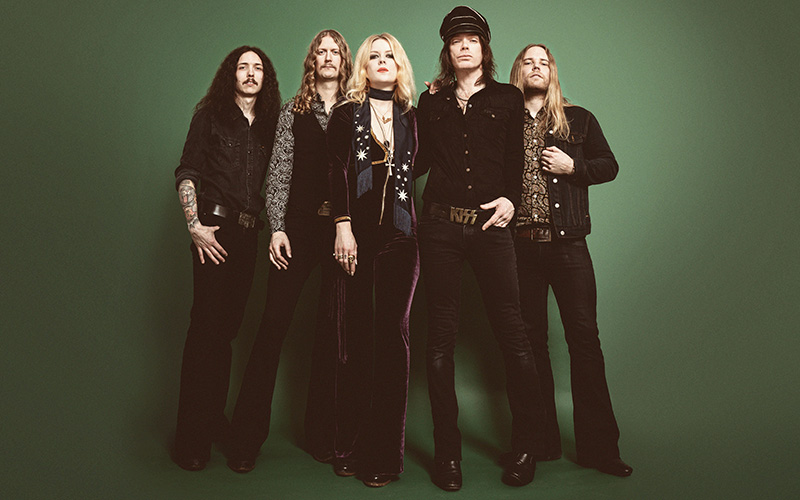 It is a cold and wet October morning in Montreal, late-morning and there are signs that the rain that has fallen since dusk is about to ease up. It feels fitting then, that on the phone are Johanna Sadonis, vocalist, founder and only member of Lucifer to have played apart of every release. Her husband and bandmate, Nicke Andersson, is also on the line. Best known, perhaps, for his drumming in Entombed, the Swedish death metal juggernaut, but also for bands such as The Hellacopters.

With the changing of the seasons, leaves changing color and beginning the end of their life cycle, it seems fitting that Lucifer are about to release a new full-length album – their second under the global pandemic restrictions we’ve all been smothered by for what is starting to feel like an eternity. Just in time for Halloween, IV, the next chapter in Lucifer’s story will see the light of day through Century Media records. Following closely along the lines of last year’s III (I’m starting to see a pattern here with these album names!), IV is a hard rocking nod to the dark lord himself, while sonically akin to the mighty Black Sabbath, and Candlemass – with a touch of Fleetwood Mac added for flavor.

With four records under their collective belts now, the groups true path is becoming more apparent one step at a time. Starting out as a more outright Doom metal band, due in large part to Garry “Gaz” Jennings, formerly of Cathedral, and now more of a Traditional heavy metal troupe since his departure. In fact, the one remaining pillar from those early days is Johanna Sadonis. Sadonis and Jennings wrote the entire debut record together, and since his departure the writing duo of Sadonis and Andersson have taken the group in a more mature direction. ” I guess you could say I changed the writing process when I joined the band,” explains Andersson, “I kind of replaced Gaz as Johanna’s song writing partner. But at the same time, the way Johanna and I write together is very similar to how they wrote together.”

This is their second new full-length to see the light of day during this poxy pandemic, which according to Sadonis, is for a combination of reasons. “We always have a lot to pour into music and now we had more time on our hand” says Sadonis. Material that was still in the working stage following the release of Lucifer III, became the basis of Lucifer IV. “Being home with our own studio made it easy to record another album during the pandemic,” Sadonis continues. With a band name such as Lucifer, it is easy to see why the band would target Halloween for the release of their new material. “I would like to say it was an impure coincidence,” Andersson adds. “Our name is Lucifer after all and weird stuff happens to us all the time. We’re so used to it now though. It would be weirder if things weren’t weird.”

“Almost all Lucifer lyrics are metaphors for real events I experienced or that touched me in some way,” says Sadonis.

Imagery is as important as the sonic qualities of an album, and the cover artwork for this new record would appear quite subjective. It depicts Johanna Sadonis crucified, while the third song on the record, Crucifix, contains a chorus line of “I burn for you” – seemingly a reverse take on the Christian philosophy that Jesus died for our sins. “The cover is more meant to be more of a witch burning than a crucifixion scene”, explains Sadonis, “However, I do appreciate your interpretation. It reminds me of the lyrics to Patti Smith’s song Gloria.” Jesus died for somebodies sins, but not mine… “The devil is a hell of a lot more interesting than the Holy Mary,” Sadonis adds.

While Leather Demon is certainly the stand-out track on Lucifer III, it remains to be seen which of the eleven tracks on the new record will become the stand-out number. “It’s too early to say,” ponders Andersson, “I tend to think the best song on any album is the one the audience get into the most at a show. Since we haven’t played live for Lucifer IV yet we’ll have to wait and see. I have a feeling Bring Me His Head could be one of those but who knows.”