I’m really loving how certain people are going over and above in these strange times. How society has been forced to take notice how important often over-looked people really are. That the people working jobs that are often looked down on are now essential. The grocery store clerks are now legends. Whereas in the very recent past, there was debate on if these people deserved to making more than the minimum wage. All of that is out the window now. 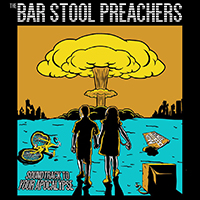 The lovely lads in The Bar Stool Preachers are doing their part for a better tomorrow. They’ve given music aficionados two new songs to groove too. Both with serious lyrical messages to the populous. Further more, they’re asking for nothing in return. The “Soundtrack To Your Apocalypse” extended play is a free download. However, anyone that has a little coin to spare, can purchase other merchandise from the band, with the funds being split between the band and the NHS. The United Kingdom’s National Health Service. The front line doctors and nurses. Failing that, fans can also make donations to the cause.

The music itself, is exquisite. Already a group that I find rather fetching, these two new songs further build on that sentiment.

The first track, “When This World Ends”, is a rocking number. Starting off with the words “When this world ends” – and continuing with that idea throughout. This is an uptempo tune, replete with Punk rock ascetics. Jamming Ska riffs and a Rocksteady groove interlaced throughout. Such is the style the Preachers are known for.

The other track, or B-side, I suppose – is a groove-laden foot tapper. Bands like The Clash and The Living End would be proud of this jingle. Like the first, this is a politically charged song – in a way. Both attempt to point out that times are hard, but change is possible. Perhaps like never before. The song itself is driven by a solid bass line and an energetic guitar riff. It is a great number.

Both tracks that form “Soundtrack To Your Apocalypse” are full of purpose. Using their music to send a message. Which is, of course, the power of the art form. Hopefully it falls on attentive ears.

We don’t have to go back to the old normal, suggest The Bar Stool Preachers. We have a chance to start over in a lot of ways. To rectify many of society’s ills. A sentiment that is growing in popularity. Yet, as the saying goes – talk without action, equates to very little. Well, something to that elk anyway.

Yet, this is not something the global government’s have over looked either. The possibility for our leaders to add further means of control during these times is far too plausible. Measures are underway already.  The threat is real. From using technology against us, to further monitoring the populous. Vaccinations, no matter which side of that debate you fall on, will become mandatory. Some are questioning these proposed changes. Others will follow Donald Trump’s suggestion to ingest bleach as if it were gospel.

What will our post-apocalyptic world resemble following this global pandemic? That largely depends on us. All of us.

For Fans Of : Mad Caddies, The Living End, The Clash

01. When This World Ends
02. State Of Emergency