Releasing digital singles is a strange trend, especially when that solo track is a cover song, as is the case here with War Curse and their Only single. 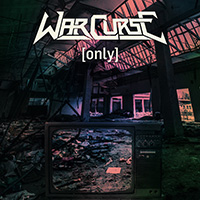 Yet lets be real, if you are going to release a one-track single, and have it be a cover, well going with an Anthrax tune with which to do so is probably a solid idea. I mean, it’s still odd, but so be it. Of course, there is a reason for this single. It seems War Curse were approached to do a “Slay At Home” performance for Metal Injection magazine. The Anthrax original was released back in 1993, on their phenomenal Sound Of White Noise album, and is maybe one of the bands better known tracks.

“We wanted to do something a little unexpected, but something that thrash metal fans would still recognize” says Justin Roth. “After kicking around a few ideas, Only seemed like a great choice for Blaine’s Gordon) voice and a fun song to learn. The response to the initial performance was overwhelmingly positive, including a nod of approval from Charlie Benante (Anthrax) himself, which was pretty damn cool.” Even if he leaked it a day early! Probably just too eager to spread the good word.

The War Curse version follows the initial blueprints down to a tee, allowing little to no room for any play. Although this is a thorough demonstration of the groups ability to mimic one of the best metal acts to have ever roamed the earth – one of the big four, it is also perhaps a missed opportunity. Why not heap on a healthy side of their own compositions as well? Even if only a live track or a pre-existing song even.  Hell, since Benante himself dug the track so much, perhaps plans could have been made for Anthrax to cover a War Curse track. No doubt an Anthrax / War Curse split 7″ would have sold out like hot cakes. What better way to announce yourself, following the new record deal with Metal Blade Records than with a sizzling hot piece of vinyl?

On this cover, as I mentioned, War Curse are seemingly the perfect Anthrax clone. However, it would be nice to know what War Curse sound like when running through their own catalog. You don’t get that here. With a little digging, I was able to find out for myself thanks to their bandcamp page, but you get my point.

Digital copies of the single can be had off of the War Curse bandcamp page, on a pay what you can system, with the minimum fee being just a buck. You really can’t go wrong with adding this song to your repertoire and playlists for a few coins, now can you? You know it makes sense!