The fantastic people over at 2000 AD are helping fight the boredom of quarantine. Forget Batman. Forget Superman. Judge Dredd, the hero the world needs is these strange times, has been made available for free. Well, 400 fantastic pages of Dredd, at least. 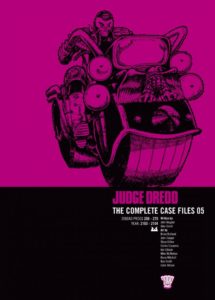 This 400-page collection includes classic Judge stories such as The Mega-Rackets, Judge Death Lives!, Diary of a Mad Citizen, The Hotdog Run, and the all-time great mega-epic Block Mania and the Apocalypse war.

Judge Dredd is a comic book franchise based on the longest-running comic strip in 2000 AD, a British weekly anthology comic. The franchise is centered around Judge Dredd, a law enforcement and judicial officer in the dystopian future city of Mega-City One, which covers most of the east coast of North America.

Their have also been two feature films based on the character. The first being Judge Dredd, a 1995 film that starred Sylvester Stalone. It must be sad that Sly was perfect for the part. He is almost the spitting image of his comic book counterpart. Then, a second and far more violent film was released in 2012. Named Dredd,  and starring Karl Urban, Dredd was a spectacular piece of film, that sadly only reached a cult following. It deserved better.

The complete case files volume 5 is free as a digital download, and can be purchased in its physical print form. Further tomes can also be purchased both digitally and in print. Meaning there is more than enough of Judge Dredd to outlast this global pandemic – no matter how long it lasts.

The digital version of this volume can be downloaded for free at the 2000 AD website.