What a week it has been between the British Grand Prix and the 70th anniversary race that will take place tomorrow, also at Silverstone.

Renault’s complaint against the alleged use of illegal parts by Racing Point was upheld and the investigation into the matter went Renault’s way. It would seem that the rear break ducts on the Racing Point are, in fact, copied from the 2019 Mercedes car. Something that was perfectly legal just a year prior. As a result, the FIA stewards handed out a fifteen point deduction to Racing Point’s championship tally and fined the team a 400,000 Euro’s. Racing Point’s drivers, however, will not see their personal point tallies deducted.

Racing Point have appealed the decision, while four other teams have also made appeals, but for opposing reasons. Racing Point, of course, feel the penalty is too harsh and remain confident that their car is completely legal. Renault, now joined by Ferrari, McLaren and Williams, argue that the penalties are not severe enough. Racing Point allege that the rear break ducts were, in fact, designed and built by the team, although they were based on plans purchased legally from Mercedes two years ago. One thing is for certain, this is not the end of the matter, but the beginning.

The Vettel saga took another turn also, as Valtteri Bottas put ink on a fresh contract that will see him continue to race for the Mercedes team. Lewis Hamilton however, has yet to sign on for future employment with the Silver Arrows squad. It would the defending champion feels uneasy discussing financials while the world is in such turmoil. Given how solid his relationship with the team is, and how close he is to quite literally rewriting the Formula One history books, the smart money would be on Hamilton and Mercedes continuing their partnership.

Vettel now has one less option available to him, while the situation grows more interesting. The four-time world champion is currently without a seat for the 2021 season, while rumors continue to grow around his joining Racing Point. Meanwhile, another driver looking for a team for next season is currently hoping to strut his stuff this weekend. Nick Hulkenberg will again have a chance to show his worth in the Racing Point, while Sergio Perez continues his journey back from a case of COVID-19. While he is no longer showing any signs, the virus can still be transmitted, which means Perez must remain in quarantine.

Then the threat of heavy winds and massive amounts of tire wear, like we saw a week prior, remain real. Tire pressures have been lowered for this race racing weekend, but how much a difference this maneuver might make won’t fully be seen until the race takes place tomorrow. No fewer than five drivers suffered incidents as the result of tire puncture last week, but offered a heart-in-mouth last lap for race leader Lewis Hamilton, who still found a way to hang on for the win. Verstappen’s late charge towards the wounded Mercedes would fall just short, putting him second, while Leclerc took the final podium position.

Lewis Hamilton and Valtteri Bottas ran rampant throughout the three practice sessions. Again showing their superiority en route to finishing first and second in all three periods. Will anybody be able to challenge the Silver Arrows duo this season, as the pair have been leaps and bounds ahead of the competition all season long. Max Verstappen has come close, yet has yet to time find himself hoisting a winners trophy this far. Luckily, there is a lot of racing to come.

For the second weekend in a row, the Ferrari of Sebastian Vettel suffered engine failures in practice. Quite what is happening to Vettel and his prancing pony this year is unclear, but certainly a shocking set of events. Vettel has not looked like the four-time world champion he is, and has been soundly beaten by his team mate, Charles Leclerc all year long. Although Leclerc himself has struggled, and only been able two podium finishes this far. 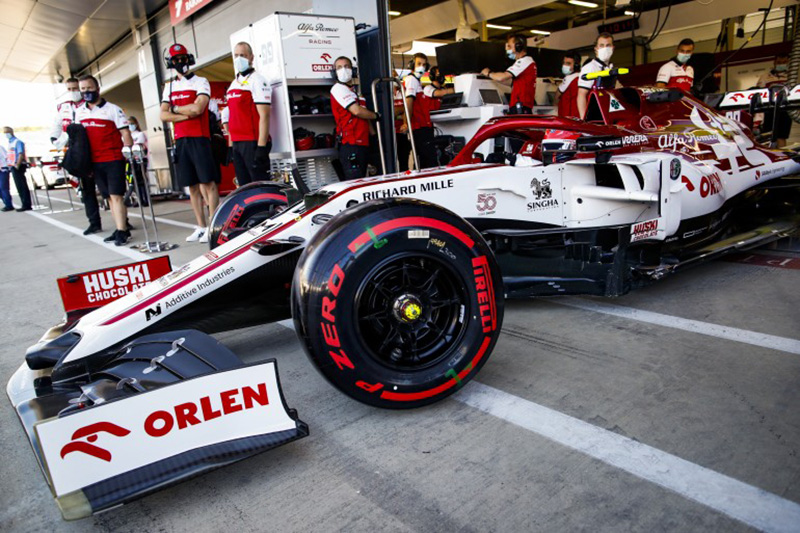 Another top team driver that seems to be a world apart of his team mate, is Alex Albon. Red Bull have notoriously been impatient with their young drivers, now appear to have a decision to make regarding Albon. Albon has struggled mightily while Verstappen has been challenging the two Silver Arrows week after week. Perhaps a spot for Sebastian Vettel might yet open up. Or perhaps a seat could be on offer to Nico Hulkenberg who has been turning heads since his limited return for Racing Point.

The opening session of qualifying was an interesting event. It was a little difficult early on for Red Bull’s Alex Albon. He ran wide early on, but would recover and find himself finishing the session solidly enough for the second period. George Russell too, found himself in the second session, but not before having to slam his breaks while on a hot lap, when the Renault of Esteban Ocon was enjoying a leisurely drive along the racing line. The incident was under investigation and a decision was expected to come following the qualifying session’s completion. Ocon also made it out if the initial running.

Daniil Kvyat, however, wouldn’t join them. He had his fastest lap time deleted for exceeding track limits and found himself in the danger zone, where Ocon would usurp him for the final place in the next session. Also going out, where Kevin Magnussen, Nickolas Latifi, Antonio Giovanazzi and Kimi Raikkonen.

The second session was less eventful. Hulkenberg found himself doing a little off-roading, but given the sheer physical strength and preparation it takes to pilot a Formula One car, that can be expected. Hulkenberg commented that his neck was quite sore after last weekend’s jaunt, where he didn’t actually get to start the race. The veteran German gathered himself and set a second fastest run of the session.

Esteban Ocon would be eliminated. As would the Ferrari of Sebastian Vettel who will start in twelfth position tomorrow, in what will be his lowest grid position start on the season. Surely there will be a lot more questions in the Ferrari paddocks following another disappointing performance. Also eliminated, was the McLaren of Carlos Sainz, Roman Grosjean and the Williams of George Russell.

If Mercedes earned pole today, it would be a record 9th pole in a row at Silverstone. Then, the question becomes, should Hamilton earn the win tomorrow – will it count as a win at Silverstone and count towards his tally of wins at his home Grand Prix. Hamilton equaled Schmaucher’s tally for home wins last weekend, and if this does indeed count as a Silverstone race, could see him set a new record. It would also be the first time a driver won back-to-back races in the same country since Schmaucher did it in 1995.

Mercedes would indeed earn the pole position, but it would be snatched up by Valtteri Bottas, edging Hamilton by mere hundreds of a second. Hamilton will be in a strong position to challenge Bottas from second on the grid. The biggest surprise of the weekend, saw Nico Hulkenberg qualify in third position. What a story it would be, if the German could find hims way to a podium finish tomorrow. During his illustrious career, Hulkenberg was never able to find his way to a podium. To do it now, as a reserve driver, would be incredible.

Max Verstappen joins Hulkenberg on the second spot of the starting grid. Ricciardo and Lance Stroll on the third line, followed up by Pierre Gasly, Charles Leclerc, Alex Albon and Lando Norris. It has to be said, that the competition this season has been fierce. Still, the two Mercedes cars remain the pinnacle of the sport, but the Red Bull’s and Ferrari’s have been quite positively challenged by the likes of Racing Point, McLaren and Renault.