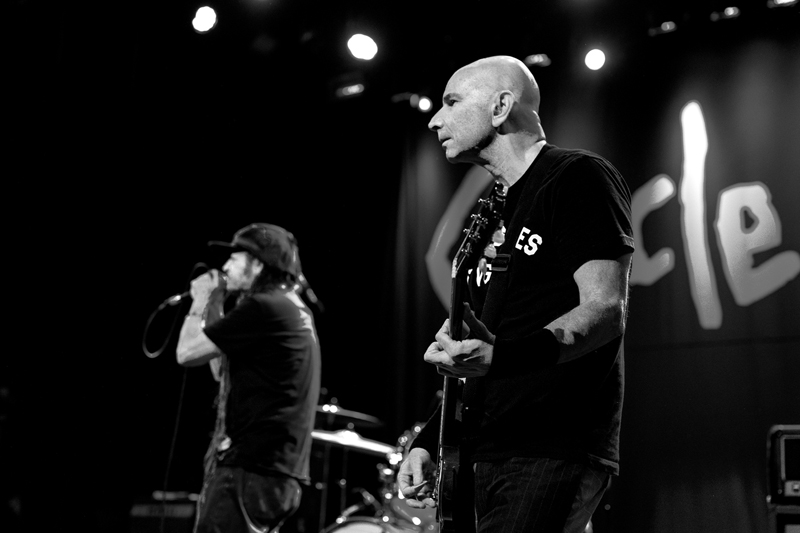 Although the tour packaged that come over the border into Canada doesn’t compare with the one that our American neighbors were gifted, featuring the likes of Negative Approach, Municipal Waste, Adolescents and Bouncing Souls – a line-up stronger than most festivals, one that floored me when I first saw the tour poster making the announcement, wasn’t as impressive, it was still a mighty adrenaline rush to be getting the Circle Jerks and 7 Seconds on the same bill. Add in Canadian hardcore journeymen Neighbourhood Watch, and you’ve got the beginnings of a memorable night afoot.

I arrived early and ready to partake in the festivities, with friends in tow and others on their way to the venue, it was surely going to be a night to remember. Others were already in attendance, and judging by their slurred words and inability to stand up of their own volition, had began the celebrations some time prior. Some wore spiked jackets, mohawks or crunchy-looking dreadlocks while others adorned fancy clothing, leaving their punk youth in the past. Decades separated the various factions, yet the music would unite us all in good time.

Once inside, the generations split up, with the younger members charging the stage while elders perched themselves eloquently on the mezzanine or wisely on the seated balcony. Somewhere in-between the two, my companions and I found middle ground – no longer young, but not willing to succumb to the dress pants and cardigans above us. Wisely, we still enjoyed a brilliant view while being far enough back from the speakers and monitors to get a properly balanced blasting of the tunes we craved. And if age does in fact make one wise; when the day comes to be seated, I imagine we shall once again thumb our noses at the boisterous youths crushing themselves against the barrier, and barging themselves into one another in a willing dance of violence and aggression known as a mosh pit. From which I still have the scars to prove my coming up the punk ranks.

A man at the back of the stage shown his flashlight towards the head of house, the usual signal that the show was about to begin. Down came the lights as the house DJ faded out his current selection and the roar of the crowd lit up the room. Finally, the time had come! 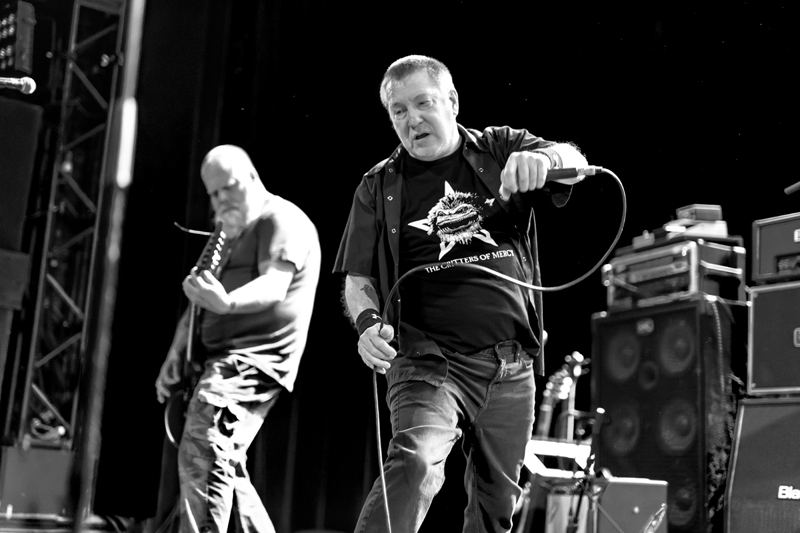 Formed in the late 80s in a far-off east coast town known as Fredericton, New Brunswick, came Neighbourhood Watch – in a bitter sweet appearance. Sweet in that they’re a fan-fucking-tastic band but bitter when you consider the line-ups that the American dates were getting, with acts like Negative Approach, Municipal Waste and Bouncing Souls getting in on the action. That isn’t to discredit these Canadian lads, who strolled onto the stage with balls the size of basketballs and by the time the dust had settled, had proven that they were in fact, basketball sized.

Neighbourhood Watch were ferocious and mean, hard and heavy with equal parts punk, hard rock and hardcore and thoroughly impressive throughout their all too short set. The reaction they received solidifies that point. Voices from the younger people in attendance seemed to think they were witnessing Negative Approach, others thought they were watching 7 Seconds, showing that at least some of those gathered had come out based on reputation of the names on the poster alone, which I suppose is pretty powerful, really. Hopefully they left carrying a new name on their breath – Neighbourhood Watch!

Also, check out that awesome tee-shirt! 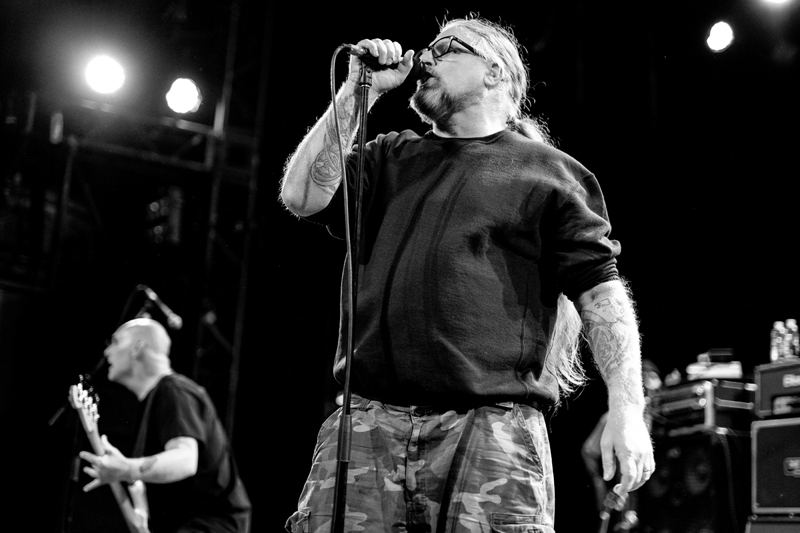 Of the two giants that had made the jaunt into Canada, 7 Seconds are certainly the more prolific when it comes to output. Beginning their campaign the year follow the birth of the Circle Jerks, yet with a score of ten studio recordings to the of but six from the Circle Jerks – but who’s keeping score? The only import factor here is that the best of those combined recordings was on display tonight, all the classics.

Following a quick turn-over, 7 Seconds were on stage and went straight into their impressive twenty-four track setlist, which began with Here’s Your Warning, then into Definite Choice, Not Just Boys Fun and This Is The Angry – all of which come from their cult classic album, The Crew. Of course, they also played the title track on a night that was largely dedicated to that record.

Before playing classic cuts from The Crew – an album considered by many to be at the pinnacle of American hardcore, vocalist Kevin Seconds took the time to state that the album’s name was never about about gang membership nor gang violence, as it has been wrongfully associated with such things since its inception in 1984. Notably, 7 Seconds rocked a ferocious rendition of Young Until I Die, that had about every single person in attendance hollering back the chorus lines, and Walk Together, Rock Together too, to similar reception.

Finally, 7 Seconds ended off with a cover track of Nena’s 99 Luftballons which is something they have been jamming for many years now, but still a lot of fun to hear in a live setting. Everybody and their dog know that track, and some of the younglings in the crowd, I imagine, might not be aware that it is a cover song – a thought that amuses me more than it really should. It had been a glorious set, high on energy and sing-along moments from the audience.

Hidden in the shadows, were members of Rise Against, who were in town to play a gig at Place Bell in Laval the following day. What better way to spend a day off while on tour. 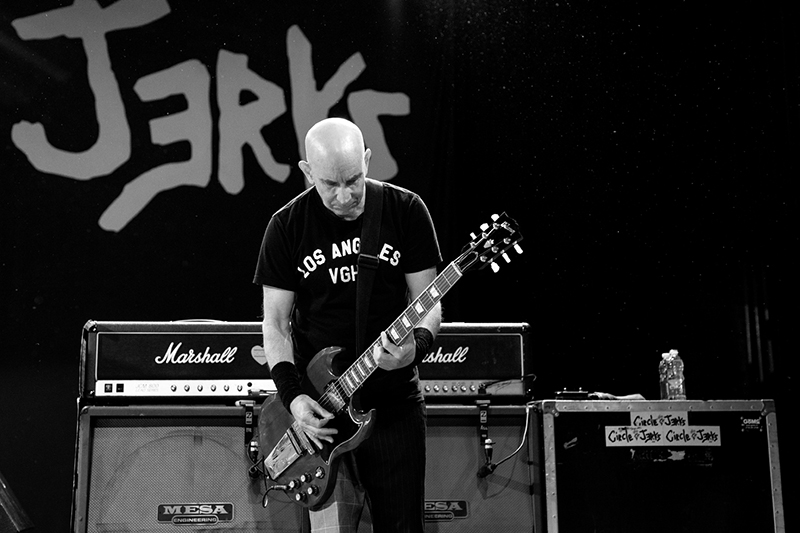 At this stage in the game, with all that we’ve collectively been through – getting to see bands like the Circle Jerks, bands that have helped build what we have today, is a treat. Bands that have been together for longer than probably the vast majority in attendance have been alive, and still around alive and kicking and doing so as well as they ever have. Nobody would have blamed the Circle Jerks for calling it a day many moons ago, yet here they are, persevering forty-two years after the release of their debut record, Group Sex. This a tour that should have taken place two years prior, but with the pandemic and all the restrictions that came with that, obviously that plan was derailed. Yet somehow, here we all were; them, us – together.

Founded by former Black Flag vocalist Keith Morris and Redd Kross guitarist Greg Hetson, who also are the only two remaining original members today. Hetson was a long-time member of Bad Religion as well, and has appeared on almost all of their albums despite leaving their fold in 2013. Seeing them together, on a stage the size of that within the Corona Theatre, is truly something to behold. Punk might be against such things as hierarchy; but everything needs some sort of order, and there certainly are musicians and figures in any scene that stand out ahead of others, to lead the way. That is where people like Morris and Hetson fit in.

Keith Morris, now at 66 years of age, stated that he planned to separate songs into blocks in order to give himself a chance to breath and planned to fill the void with banter, which when coming from somebody as well-journeyed as Morris, should be seen as a blessing more than anything. An elder statesmen before us, sharing knowledge, views and opinion is a rare chance at intimacy with a figure-head in the Punk and Hardcore worlds, and I for one ate it up – and asked for seconds. Others though, it would seem didn’t agree. A fist fight broke out right in front of Morris, while he spoke to the crowd. A fight, during a spoken word segment – I’ve now seen it all. Morris was less than impressed, interrupting himself to inform the ruffians that this was not acceptable behavior, at a show or anywhere else either (are you listening, Will Smith?). Imagine getting publicly scolded for being a degenerate asshole by Keith Morris!

The opening block of the show, began with Deny Everything, Letterbomb, In Your Eyes, Stars And Stripes and Back Against The Wall. In all, the Circle Jerks would churn out a whopping thirty-three songs – which sounds less impressive when you take into consideration how short most of their material is, but let’s not go that route. As I mentioned, this was tour was originally meant to celebrate the fortieth anniversary of the Group Sex album, and the guys played all but the titled track off that album, but given the two year delay – it also wound up being the fortieth anniversary outing for 1982’s Wild In The Streets album, too. Only about half of that recording was represented on stage though.

Still, the Circle Jerks built a solid setlist that represented all six of their studio albums, even if more than half of their selections came from the first two records. Getting a chance to hear them play through those early tunes, was a gift. A treat, and a blessing. The evening was a special one, for all the reasons mentioned throughout this article. A chance to witness the originators of a musical genre and a lifestyle, at a time where the world needs such things perhaps more than ever – which made the final song of the night a poignant one. Question Authority. Given all that is happening right now, abroad and right here in Canada, I truly hope everyone heard that call.

Throughout, the crowd’s energy matched that of the band and their music, as the younger folks in attendance slammed into one another, threw half-filled cans of beer at the stage, which given the heavily inflated cost, was something of a sacrifice in itself, and crowd surfed for the entirety of the set. After eleven bucks a can, many of those that had come out chose to visit the store just across the street, where they could score a six-pack for the same price as one can inside the venue. Whether purchased at the Corona or across the street, by the time the lights came up, it was clear that many had sank a few too many wobbly pops. Some needed the help of friends just to leave the venue. Others seemed to have been imbibing on other, more illicit materials, given away by beady eyes and the grinding of teeth. This is punk rock after all.

Written and photographed by Kieron Yates