They say life is about experience. And that has been my experience with life this far in. 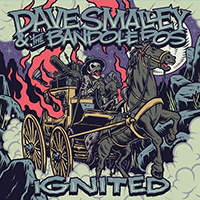 For Dave Smalley, vocalists for some of the more well-known Punk rock groups – it has certainly been the case. From his days in DYS and Dag Nasty. To All and his current bands, Down By Law, Don’t Sleep, and Dave Smalley & The Bandoleors. Are You Experienced? Well, Dave is… to quote Bob Marley. Sort of. Alright fine, he never said that but he might have! No?

Anyway! Story goes, that while Smalley and Down By Law were on tour in Europe, they came across a band from Spain named G.A.S Drummer. After playing together a few times, the lads bonded. Friendships were made. And a band was born! Also featuring Marcelo – an Argentine that Smalley found while doing solo shows in Europe. I’m starting to see a pattern here. Dave Smalley collects musicians.

Later this week, Dave Smalley & The Bandoleros release their new EP, Ignited. Their first effort since their thunderous 2018 debut opus, Join The Outsiders. Like their debut, the five new songs here and sublimely well written.

With a few taps on the snare, Punk Rock Battle begins. Like the recording as a whole, Ignited is an upbeat and joyous series of anthems. Switching between rapid and melodic passages to slower and meaningful segments. Full of hooks and swanky riffs, slick solos and sing-along vocals. Ignited would be the perfect soundtrack to a night out with the lads. If only night’s out with other humans was actually allowed.

“We are the boys who make too much noise” sings Smalley, on the releases title track. The third of the five shanties found on Ignited. Possibly the strongest track here. Then Smalley’s days in the hardcore scene echo back on Stabbed. Or at least during the songs opening moments. It melts into a solid rock song in its latter moments, reminding me of Duff McKagan’s Loaded, for some odd reason.

The final piece to the puzzle, No X-Ray Vision, is maybe the more accessible song on here. More relaxed vibe and a fitting ending. It has a gleeful feeling to it, filled with hope. A light at the end of the tunnel sort of deal. The sign of any good piece of music, as is the case here, is the desire for more. And Ignited certainly leaves the listener wanting more. More songs. Judging by the state of the world – those might be a long time coming.

With five songs tracking in at roughly fourteen minutes, this EP is a quick jolt of energy. A good bump before a night out. Pre-orders can be made over at Little Rocket Records bandcamp page.