Tonight, Down, the metal super-group featuring current and ex-members of Pantera, Corrosion Of Conformity, Crowbar, Goatwhore and EyeHateGod played their home town of New Orleans, in front of a rambunctious audience. Although, with the world being in the state that it is, we weren’t able to attend in person, but were privy to a pretty nifty live stream of the whole affair – which is cool, because it means our bar tab was far less than it would have been had we been in Nola! 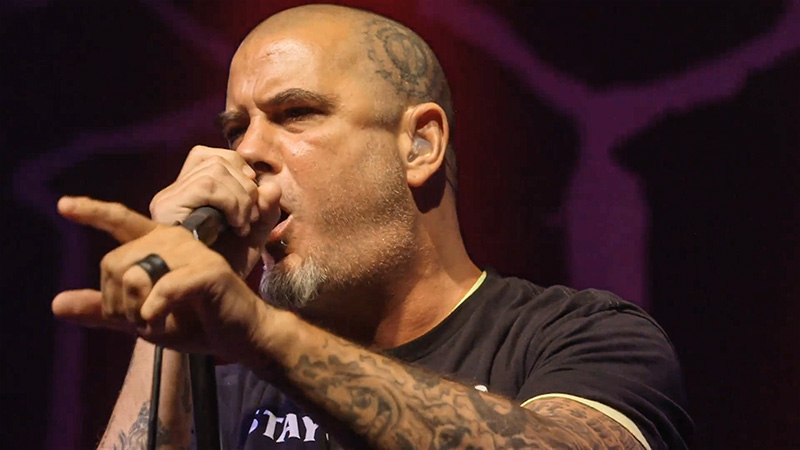 There’s something to be said, about catching a live show from the comfort of your own couch, in your living room, with a fridge heavily stocked with beer – and no line-up for the bathroom, either. Truth be told though, I’d trade it in for a chance to stand shoulder to shoulder with a bunch of sweating, stinking strangers – one of whom is sure to spill my beer all over me. It always happens. That  social interaction can’t be beat. That choice between ear plugs and hearing loss, how I miss that. Still though, this streaming thing is pretty innovative too! A hell of a lot cheaper than a flight to Louisiana as well!

Amusingly enough, there is something that both live streams and live shows have in common. Yep – delays. For whatever reason, shows, especially in the world of punk or metal, never start on time. Part of the package, I suppose. This time, according to one Philip H. Anselmo, esquire, the delay was the result of rust. Show rust. Venue rust. Just, rust. See, the whole music world was paused for all this time, and is only now getting back to where it was, or at least some semblance of that, and there is rust. It’s normal. It’s all good. What’s an extra half hour before a gig anyway? 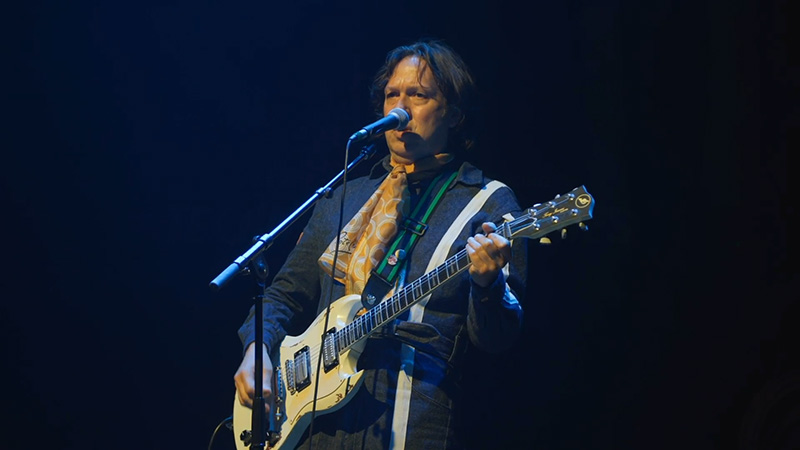 Opening the gig, was stand-up comedian Dave Hill. Hill has been around some time now, and starred in television shows some of you may have heard of. Unbreakable Kimmy Schmidt, The Tick, Inside Amy Schumer, Full Frontal with Samantha Bee, that sort of thing. Some of you may have seen these shows – I sure as shit haven’t. So, this was my first encounter with the man, and let me tell you, if this is any example of this man’s material – I’ve missed nothing. Nothing, at all.

Hill starts off with a banged up old guitar, that looks like something Corrosion Of Conformity would play, butchered Mother by Danzig, then Carry On My Wayward Son, by Kansas, before the crowd starts yelling for Free Bird, you know, by Leonard Skynard. Then the stand-up started. The crowd was silent for the majority of his act, if not all of it. There were very few laughs at all and the whole thing felt odd. Why would you have a bad comedian opening for a super-group metal band like Down?! Ah well, what can you do? Sit and suffer though it. I don’t like to talk badly of anyone, but as a reviewer, it is my job to announce that this guy was terrible.

In fact, the only cheer he received, was when he announce the Down band, were up next. Pitiful. 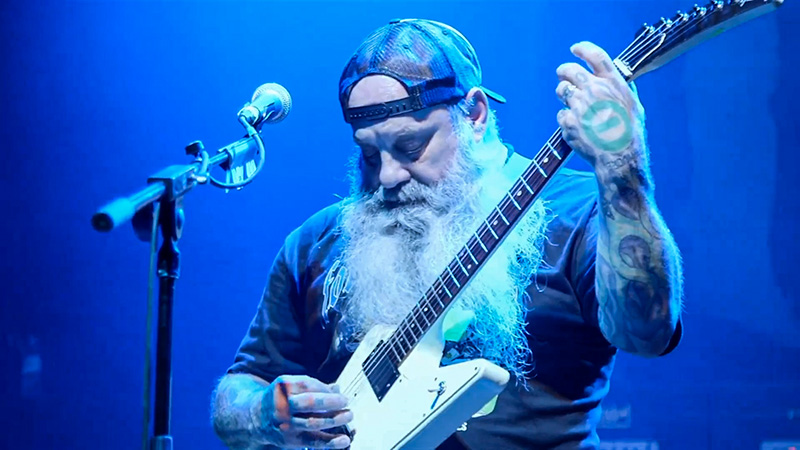 The main feature on this night, is the mighty super-group known as Down, playing to their home crowd, at The Filmore, in New Orleans. Just to be a part of this, feels special. Not only is this a return to the stage for Down, after a lengthy absence due to this pandemic, but the boys are going to be playing their incredible debut record, Nola, in it’s entirety. That, on its own merit, is reason enough to be checking out this show tonight.

From the get go, it is obvious that Anselmo, Pepper Keenan, Kirk Windstein, Jimmy Bower, and Pat Bruders – who replaces former Pantera bassist Rex Brown in the line-up, are as tight as they have ever been. I mean, they sound as good live as they did on the record all those years back, and that is an impressive feat. Throughout their performance, I couldn’t help but be in awe of just how perfectly they pulled this off. Anselmo can still sing every note of that album, flawlessly, and the boys jam is just as well, too. There was but one hiccup, and that was a minor fuck-up on the part of Pepper Keenan during Stone The Crow. Minor. Otherwise, Down were solid tonight.

On the third track, Lifer, Anselmo dedicates it to his lost brothers – Dimebag Darrel and Vinnie Paul, as well as Hollise Murphy, a friend to Anselmo and well-known in the New Orleans scene, who lost his life due to COVID. Executed with precision and perfection, as was the case throughout the evening – Down show that they can still pull off a live show, and with relative ease. Ring rust or no, these boys are primed and ready for a return to touring.

For what ever reason, Philip H. Anselmo is performing bare foot, standing on his own personal throw rug. I sort of get it – the first thing I do when I get home is throw off my shoes and socks. Anselmo has always done his own thing though, so why change now. At some point in the show, somebody from the audience (remember crowds! Holy shit!) throws a rubber snake at Jimmy Bowers. Gag being, that Windstein had told Bowers that The Filmore at one point, had been infested with snakes – and Bowers believed him. So, there was Phil Anselmo, barefoot, with a rubber snake hung around his neck, mocking his pal. Comradery. Because if you can’t mock your friends, why have any to begin with? In case you’re wondering, The Filmore was never infested with snakes – unless you count that rubber fella hung around Anselmo’s neck and shoulders. 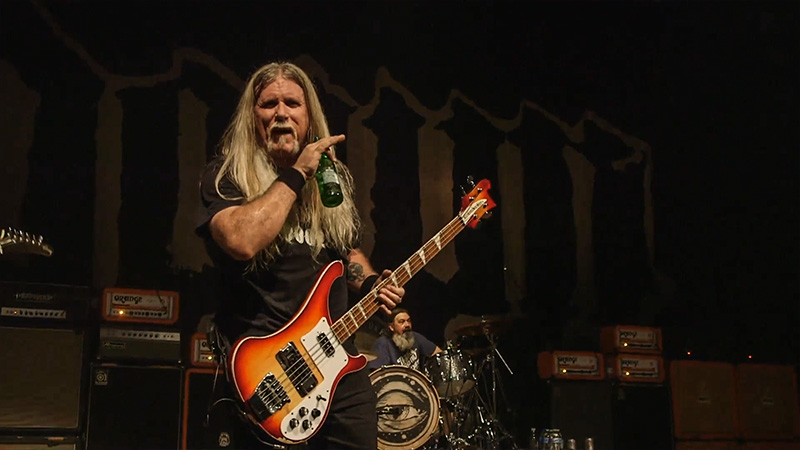 At several moments, Anselmo seems moved – and expresses as much with his comments. “The older I get, the more I appreciate you all in this life journey!” he exclaims. Probably, hopefully, realizing that those in attendance – both in person and virtually, share that feeling. “We miss this shit man”. he goes on to say, “Don’t think we don’t, and its not going to sink in until after I smoke my first big ass joint after the show.” Of course, that earns a cheer from the packed house.

Besides the Nola record, there are also a select few cuts from other records played, Ghost Along The Mississippi for one.  Also played, were New Orleans Is A Dying Whore, N.O.D, Lysergik Funeral Procession and The Seed. Now, here’s the thing – this was billed as Down playing Nola in its entirety. Turns out, that was a lie. A lie I tell you! Why? Well, they didn’t play Jail – which, I admit, would have been a challenge, yet they did say the Nola record would be played in full. False advertising, me amigos!

Now that I reflect a little here, they also failed to play Temptation’s Wings, Underneath Everything and Pray For The Locust which, fair play, is an instrumental. Regardless, that’s four missing tracks. Sneaky buggers! I won’t hold it against them though, given how good they were tonight.

There wasn’t to be the traditional encore. Instead, during Down’s rendition of Bury Me In Smoke, the guys were replaced by Dave Hill, jamming on Pepper Keenan’s guitar, and his band that had opened the night. Hill isn’t very good at comedy, but the man can play guitar – credit where credit is due. Anslemo is once again adorned with that rubber snake, as he reclaims the microphone one last time for the night. “I wouldn’t be a professional if I didn’t end this off right” he tells the screaming crowd at The Filmore, ending it off by singing a quick line from Led Zeppelin’s Stairway To Heaven.

What a night. Even from the comfort of my own couch, this was quite the gig.