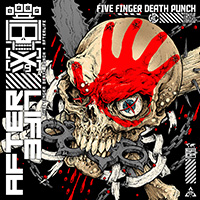 With a solid production, Five Finger Death Punch keep on truckin’ by rehashing the same old same they’ve been churning out since the start of the band. That is to say there still is no progression to the sound of Five Finger Death Punch – you know exactly what you’re going to get with these guys. I suppose there’s a positive in that, somewhere. You’ll know when the breaks are going to be, you’ll know the moment they’re building to the break downs and when the choruses are going to hit – because it’s the same exact formula as the eight previous albums.

Like the majority of the material that has been released by Five Finger Death Punch, Afterlife serves as an entry-level introduction to heavy music – a bridge from radio friendly pop rock to where the real treasures lay. The band relies heavily on simplistic song structures and writes with the intention of creating an ear worm over creating anything of substance. Album after album, the formula remains the same, and angsty teenagers keep lapping it up. That’s nine studio albums now, if you’re keeping score.

It isn’t that Fiver Finger Death Punch is bad, per say, they just aren’t very good. There isn’t anything special about them. No wow factor. Their songs have become so predictable that it is now almost comical, nothing about it is surprising or unexpected – and just when you think the cheese factor of the lyrics couldn’t possibly be any more amplified. Bam. Processed cheese slices. Afterlife is like a Michael Bay movie; turn your brain off, and you’ll stand a higher chance of enjoying it. Ignore the plot holes, the poor acting and terrible stories and just enjoying the explosions and gun fights. Pew pew pew.

There is so much on Afterlife that is either cringe-worthy or seriously cliché, yet it does still have the occasional moment where it is bearable. It’ll never be a go-to record, as there simply are a plethora of better options – especially in the day and age where everything is at the tip of a finger on whatever streaming site you choose. Well, not me – I’m a physical media guy, but you get the point I’m trying to make.

I remember once seeing a video on YouTube or somewhere similar, that layered Nickleback songs on top of one another and the timing was identical – and I bet the same would be true for Five Finger Death Punch, too. I’m going to go through the trouble of making that video clip, I’m just going to put the thought out into the universe and hope somebody else does.

Read More:
>> Jackalope returns for its 2022 edition
>> The Goon finds a home on Netflix
>> Pantera Albums Ranked From Worst To Best

The bottom line here is that if you’ve enjoyed Five Finger Death Punch in the past, you’ll probably enjoy this new record, as Afterlife is akin to everything else they have ever done. And if their previous material wasn’t for you, there isn’t anything here that is about to change your mind. If you’re looking for something fresh to listen to, there are better avenues to venture down.

Copies of Afterlife can be pre-ordered on compact disc, vinyl or digitally by following this link.

For Fans Of: Nickleback, Metallica, Godsmack