What the shit? Can this be real! A new Green Jelly record? Oh yes, yes my friends, it is real – and awesome! 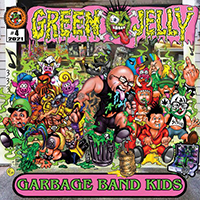 When I was a thirteen year old just finding my way in the music realm, I was all about Green Jelly. I practically wore out my cassette tape copy of Cereal Killer, in my yellow Sony Walkman, listening to it on the school bus (also yellow – coincidence? I think not) trips to and from high school. Never did I think , all these years later, there would be more! More Green Jelly! And even when it was apparent that no, this wasn’t one of them there internet deep fakes, but a proper new studio recording, did I imagine I would have so much fun revisiting my tweenie years through Green Jelly.

I replaced that cassette, and the worn out copy of 333, by signing up to BMG using a fake name – and never completed my obligation once my twelve for a penny package had arrived. I know, scumbag move, but all the kids I knew were doing it. To tell the truth; I’d happily do it again too. Columbia House? Yeah, fooled them too. That’s just what we did before the internet. Little wonder that, once the internet had spread to homes across the world, that piracy too became virtual. It even made poor Lars Ulrich cry. A lot. Anyway, before I get too side-tracked, back to Green Jelly.

I shit you not, there are currently seven hundred and eighty one active members of Green Jelly. It would take me far too long to explain that to you, and I’d just be ripping off an article I myself read from LA Weekly, so I’ll just slap up this handy little link for you to check out on your own. I mean, read this one first – then go check that one out. Cool? Cool! And if that wasn’t enough musicians to fill a stage, Green Jelly have recruited extra help for this, their fifth studio recording. Members of  Fishbone, The Dwarfs, Weird Al, Suicidal Tendencies, Trailer Park Boys, Piledriver, Kittie and former wrestler Hacksaw Jim Duggen, all make guest appearances.

Assuming our readers didn’t hustle off to that LA Weekly article I posted above, lets talk about Garbage Band Kids. Main man Bill Manspeaker is a genius. A visionary. Instead of there being an actual Green Jelly band, instead, like in the Chuck Palahniuk novel Fight Club, there is a Green Jelly chapter in practically every city. A band ready for whenever Manspeaker rolls into town. These different chapters are responsible for the songs on the new record, and as such, the record is drastically different on each track – with only Manspeaker’s performance creating any semblance of continuity. Isn’t that wild? Seventeen songs written by a Green Jelly cult. There were always rumors as to who was and who wasn’t in the band, much like Ghost. Members of Tool – which turned out to be true, and all kinds of others. Now, Green Jelly is a full-blown organization.

I would wager that everyone and their dog has heard the Three Little Pigs song at least once. Green Jelly’s 1992 smash hit. Well, there is a new take on that classic jam on the record, as well a fistful of nods back to the days of Cereal Killer and 333. Thankfully, these nods never seem cheesy or forced. There’s a song named after the 333 record. All sorts of throwbacks to those seminal older tunes, too, and for those of us old enough to have been around in those days – those odes are sure to drag a smile across the most wrinkled faces.

Musically, Green Jelly are at their most adept – probably due to the massive numbers they now have to select from. Lyrically, Manspeaker is as nutty as ever, bordering insanity and often wondering into looney tunes territory. There are so many what the fuck moments that you can’t help but burst out laughing at. With each listen, new lines jump out and the giggles ensue. Some of those lines are ludicrous and as Manspeaker himself says – you have to be high on medical marihuana to enjoy this. Which isn’t exactly true, but I imagine it helps. Aliens!

Copies are available on both Compact Disc and vinyl, however, four of the albums seventeen tracks will only be available on the Compact Disc version. Orders can me made via the Cleopatra Records website. If the album looks similar to ’80s trading card phenomenon Garbage Pail Kids, that is because it was created by one of the same artists responsible for those incredibly grotesque cards. The albums linear notes contain more artwork as well, which on its own merit, warrants the price tag. Crabby patties is people!

For Fans Of : Gwar, Tool, The Mentors