Finland’s Insomnium are back, with an incredible new EP named Agent Moon – and it is full of surprises. 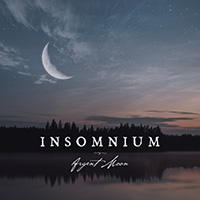 How some musicians are able to excrete ambiance and atmosphere from their work is truly astonishing. Once again, Insomnium have done just that, with these four new beautifully composed compositions. At times dark, morose and hopeless – yet with a sense of hope and an uplifting feeling akin to that moment when the days early sun  rays fall upon the face on a crisp morn. Something that, for whatever reason, Finnish bands seem to be able to portray better than anyone else. Perhaps it stems from their harsh climates – I don’t know, but there is something undeniably Suomi in the sounds of Insomnium.

If stripped down to their bare bones, Insomnium are primarily a melodic death metal band with occasional elements of doom metal and progressive metal, but there is so much more afoot here. Feeling. Emotion. Their ability to move their listener is so powerful and pure, and delectable in its deliciousness.  From alternating vocals; the Jekyll and Hyde approach of glorious clean vocals, with an operatic undertone, to a guttural drone that would work equally well on a black metal release as it does here – the way they play off each other, so beautifully morose.

Despite the fact there are but four tracks on Agent Moon, the overall running time of this EP still manages to eek past the twenty-four minute mark. More impressive, is how much variety Insomnium manage to squeeze into these four compositions. Such range.

Opening with The Conjurer, the most heavy of the four numbers found in this package, and the only track to primarily use guttural vocals. It is a solemn, depressive song that has a The Gallery era Dark Tranquility vibe with shades of Shape Of Despair sprinkled in. Melodic, drawing on emotion and very well crafted. The overall ambiance portrayed, is wonderfully dark – able to extract feeling, through ambiance and atmosphere. Melancholy in abundance.

Taking notes from the likes of Iron Maiden, whom have always been a major influence on melodic heavy music, Insomnium also have a three-pronged guitar approach, with axe-men Markus Vanhala, Ville Friman, and Jani Liimatainen, and well as Niilo Sevänen on bass and vocal duty, and Markus Hirvonen on the drums. Having the unconventional third guitarist allows for so much more intricacy and room to play, so to speak. Like Iron Maiden, Insomnium too are able to use this approach to find harmonies and melodies that may not otherwise be available to them.  Although The Conjurer could probably fit relatively easily into older works, the following three pieces explore more of a balladesque approach, using familiarities like acoustic guitars strumming classical riffs, keys and massive melodies. More of a exploration than a continuation from 2019’s Heart Like A Grave, which probably also explains its short playtime and track listing.

The global pandemic forced Insomnium – like most musicians around the globe, to abandon their plans. From those tour plan ashes, arose these four songs, which came to be the Agent Moon EP. Although softer than what would normally be heard coming off an Insomnium record, the time away from the road has given the ground a chance to experiment a little with their sound. Acoustic guitars and clean vocals, sorrowful ballads – yet Vocalist Niilo Sevänen swears the band hasn’t changed ideals or sound, and that this is more a chance to experiment, and emphasizes that future releases from Insomnium will be back to how things have always been.

“At the moment, the exact plan looks like this; over the coming months, Insomnium will be unleashing four atmospheric songs in a digital format, accompanied by scenic music videos. And when the autumn leaves start to fall once again, these chants of burdening gloom will be pressed into a physical EP as well. The forthcoming extended play is called Argent Moon, adds guitarist Markus Vanhala.

“Our guideline was clear from the beginning: for these versatile songs, we need organic and airy sound, which is far away from modern, compressed soundscapes”, emphasizes Sevänen. “We were wandering on the old school paths – No drum triggering, no re-amped guitars”, adds Vanhala.

“Even if music has been an extremely important part of our lives for a long time, I really feel that it means even more these days. Working on some heavy tunes has been almost like a life saving therapy for us”, nods Vanhala. After a short pause, the guitarist adds with a smile; “So needless to say, but our wild adventures in the world of heavy metal will go on. However, next time, we will be bursting out tougher and harsher stuff for a change…”

For Fans Of: Swallow The Sun, Omnium Gatherum, Wintersun