As digital-only singles continue to become more and more popular, Sweden’s Sorcerer tackle a monster with Gates Of Babylon, originally recorded by Rainbow. 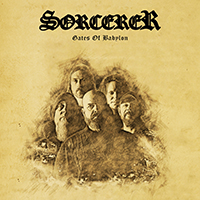 With all that has gone on – or with the lack of events, I should say, artists have had much more time to explore and play with ideas they might not have had the time to in the past. I suppose this fits that bill. Following up on 2020’s Lamenting Of The Innocent record, comes a one-track, digital only single – Gates Of Babylon, originally recorded by Rainbow in 1978. Now, at this point, it needs pointing out that Rainbow are among the most celebrated and renowned groups to ever play heavy metal, as the works of Ritchie Blackmore and Ronnie James Dio were on-par with the best of the best. Blackmore, of course, was a founding member of Deep Purple prior to Rainbow, further showing his pedigree as a musician.

Attempting to cover anything that was originally recorded by the master himself, one Ronnie James Dio, is always going to be a monumental task. Dio was arguably the best vocalist to ever sing a metal anthem, though several may lay challenge to that title – Dio remains ahead of the heap. As such, his influence is omnipresent; as much today as it has ever been, and will remain a forefather, an icon and major form of inspiration for aspiring singers for as long as metal reigns. Listening to anything Sorcerer have recorded to date, will undoubtedly show that Dio has been a heavy influence on Anders Engberg, who here tackles a very challenging task and excels in the process.

There are a few notable changes on this rendition that should be taken into consideration – a reduction in speed, which gives the song more of a doom and gloom aesthetic, and the removal of the keyboards that guided the original Rainbow version of Gates Of Babylon – this was more a risky decision that could impact fans of the original. Then again, covering songs and playing them identically is sort of a pointless venture, where music aficionados could simply just spin that original version, and be done with it.

Those keys though, played a huge part in the ambience and structure of the original piece, and are missed here on the Sorcerer version. Yet all is not lost. While Rainbow’s version, is a more upbeat, traditional stroll through 80s rock and heavy metal, Sorcerer’s Gates Of Babylon pares more with the more doom-laden through-back to the those days – to what those inspirations bore rather than the what they portrayed. Fascinating, as Spock would have said.

The subtraction of these keys, took a while to grow accustomed too, but ultimately the end result is a very solid and fresh take on this classic cut. Engberg absolutely nails the vocals, which is predominantly the main characteristic that would be placed under a microscope on a cover of this stature. In all, this most surely is worthy of a listening, at the very least. Even the album cover is a tribute to 1978’s Long Live Rock N’ Roll record from which Gates Of Babylon comes.

Regarding this cover project, Sorcerer guitarist Kristian Niemann says “When trying to come up with a way to arrange Gates Of Babylon and give it a different spin, I tried to imagine what it would’ve sounded like if Tony Iommi wrote it instead of Ritchie Blackmore. It probably would’ve been slower and heavier, possibly down-tuned a bit. We skipped the keyboard intro because it would be impossible to capture the magic of the original. We had a great time recording this single at SolnaSound Studios, and overall we are very happy with how it turned out. We hope our fans will dig it too.”

As this is a digital only affair, digital copies will be available from Metal Blade and from all streaming services as of September 10th. Perhaps Gates Of Babylon will be used as a bonus track should their latest record, Lamenting Of The Innocent, see a re-issue down the line. Until then, it’s digital only.