Montreal’s Kapitur, by way of Brazil, are about to drop a new single, Roots Bloody Roots, next week. 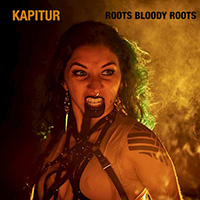 One of the great things about bands that come from areas of the world where most wouldn’t think metal prevails, places like Brazil, is that the next generations that eventually follow the few grow to follow in their shadows. With pride, with a sense of kinship and someone like them to look up to. Enter Kapitur, who prior to dropping this incredible cover of Sepultura’s Roots Bloody Roots, had but a demo to their names.

This track, which you will be able to hear should you scroll down this page a little, made it’s way to Sepultura’s ears – and impressed them. Enough so, that the groups singer, Derrick Green, reached out to the young artists and arranged a meet-up with them while on tour – at their Montreal date. Kapitur’s vocalist and celloist, Bruna Wanderley, is originally from Brazil but has called Montreal home since 2015. Rounding out the line-up, are Sam Neuman on drums,
Bruno Coe on bass and Zach Dean on guitar (I wonder if he plays a Dean).

Replacing the distorted electric guitars from the original version, with a lead from Wanderley’s electric cello, brings new life to a classic cut. Taming the guttural snarl of Max Cavalera for a more feral screamed style of vocal, which also brings a new element to the fold without distracting at all from the sheer aggression and brutality of the original piece. Kapitur are able to produce a damned fine cover track, while keeping the songs poignant message and raison d’etre very much alive.

“It’s uncommon to hear a classical instrument like the cello in heavy music that isn’t Melodic or Symphonic Metal” states Wanderley, “My intent is to explore creative ways of using my instrument in heavier contexts. Twenty-six years ago, Roots Bloody Roots pleaded for the preservation of Brazilian cultural diversity. Today, Kapitur’s distinctive revisit of the song revolves around the historical alienation of common people regarded as different, the Bloody Roots of us outsiders. It grips on the struggle of finding oneself estranged from one’s original and adoptive cultures, to the ongoing murder and colonization suffered by many people in a land that was theirs for centuries; from immigrant, racial, religious intolerance to the global, modern alien anxiety suffered by African descendants and their relationship to an inaccessible homeland. Bloody Roots is about you, or someone you know and care for.”

This fantastic and creative cover from Kapitur can be heard on Youtube (or just watch it here, right above these words), on their bandcamp page or on the Spotify platform (Yes, yes we finally promoted Spotify. Don’t get used to it though!)

For Fans Of: Sepultura, Soulfly, Apocalyptica