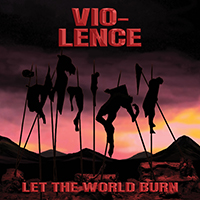 When people discuss Thrash metal, Vio-Lence might not be the first name off the tip of the tongue, but guaranteed, they’ll be mentioned within the first dozen names. Since 1985, Vio-Lence have been carving themselves out a hefty chunk of Thrash supremacy, but with just three full-length albums and a fistful EPs to show during that time, are often forgotten. I remain convinced, that if Vio-Lence had been more prolific with their recordings, they would have been on par with bands like Slayer, Megadeth and Anthrax at the top of the heap. Following up last year’s California Uber Alles single, a cover of the and only Dead Kennedys, comes a fresh set of five songs dubbed Let The World Burn. From the get go, it is abundantly clear that Vio-Lence are back, and they mean business.

Another of the many astonishing bands to arise from the Bay Arena scene, Vio-Lence initially split before a fourth record could come about (although it was in the writing stages at the time), and that eventually led to former guitarist, Rob Flynn, forming a little known band by the name of Machine Head. Still, even though the band has been in deep slumber for much of the years between 1993’s Nothing To Gain and their Kennedy’s cover digital single, they have remained an integral and key part of the trash metal world. A titan. A sleeping giant. And as is so often the case in the extreme music realm; a band is never truly dead and but a phone call away from resuscitation.

As you would expect from a band as well renowned as Vio-Lence, Let The World Burn is a viscos slab of trash played at breakneck speeds, replete with violent breakdowns and all the galloping riffs a song could possibly contain. Hot shredding solos, and scorching drum beats. Still true to their origins and as poignant as ever. Unmistakably true to their roots and the sound they helped evolve more than thirty years ago. Despite a near-two decade silence, of new material at least, it is remarkable how Vio-Lence manage to sound as if they never took a step back and vanished for a time.

“That came very naturally,” states founding guitarist Phil Demmel. “I hadn’t written a lot of thrash in the past seventeen years or so but being the main songwriter for the band over the years I wanted that sound, I wanted that mid-80s raw thing, but I also wanted to capture our signature notes and structures and stuff like that.” Elaborates vocalist Sean Killian, “Each song has its own individual sound, they are all very thrash metal, there are grinding riffs, technical riffs, and plenty of speed. The lyrics are written freely with no restrictions and without compromise while the vocal patterns are typically unusual and delivered with a multitude of emotions.”

The record kicks off with Flesh From Bone, that quickly builds into a raucous riff, full of energy and galloping old school thrashing. Manic double bass drumming, hard and heavy beats to fill the solid guitar work laid down by Demmel. Screaming Always continues the frantic pace from where Flesh From Bone left off, but slows into a morbidly fantastic riff about halfway through, creating at atmosphere that could have easily have been on Slayer’s South Of Heaven or Seasons In The Abyss records. Upon The Cross contains a riff feels like something Gary Holt might have written for as Exodus record. Possibly due to Demmel filling in for Holt in Slayer while Holt was away dealing with family issues. Demmel might not have written much in the way of thrash metal in the last decade, but he has more than made up for that here on Let The World Burn.

With Upon Their Cross, Demmel gets in some really groove-laden guitar work, somewhat combining his work with Machine Head with some slick slide work that Dimebag Darrell might have laid down. Pure thrash is the name of the game on Gato Negro, an old school ripper that would make Whiplash proud. Finally, the title track, Let The World Burn, slides in and demolishes all in its path. Combining a little of each element that was found on the four previous tracks, into one well-rolled joint. A real neck-wrecker of a piece. A spoken-word segment midway through the track adds a sort of Hollywood movie or video game storyline feel, before Vio-Lence let it rip to conclude their new opus. Solid stuff.

Your copy of Let The World Burn awaits you, by way of pre-orders that are available now from Metal Blade Records, on vinyl – in a variety of color options, Compact Disc, and digital too.

For Fans Of: Destruction, Exodus, DRI