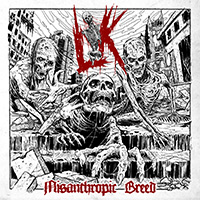 It is so good to hear that old school Swedish buzzsaw guitar tone again. Even if it does instantly send me down memory lane and yearning for Dismember records of yore. There’s just something about that tone that really does it for me. Always has done. With the revival of the old school death metal sound in recent times, my interest in the genre is renewed as well. These are the sounds I grew up on.

Moreover, I am an admirer of melody in metal. Lik have that in droves and I have been eating it up since I first got my grubby hands on this fresh slab of rotten meat. Sure, the similarities to bands like Dismember are huge – but is that really an issue? It certainly doesn’t distract anything away from this album for me. In fact, I would be happy to hear more bands purveying Dismember worship. After all, Dismember, Entombed and the like released some of the greatest records in the storied history of the genre. I, for one, welcome a return to the sounds of 90s era death metal. More, I say, and keep it coming.

On Misanthropic Breed, their third album, Lik retain all the elements from their previous efforts. Meaning quite simply that if you enjoyed 2018’s Carnage record, then you’ll dig this one too. The formula is an age-old and tried and tested one, that consists of brutality, while the guitar work remains rapid, melodic and ferocious and ripe with slick guitar solos. The vocals are guttural as you would expect and the drumming is viscous and scathing. Lik continue to walk the path laid out by their forefathers, and the result is glorious.

If there is any downside to Misanthropic Breed, it would probably be that Lik are do very little for push the genre and sound forward. Instead, they’ve chosen to remain obsessed and content to rehash an old style of music. As I mentioned before, I personally have absolutely no issue with this approach, as it is very much a sound I have adored for many years. Could new ideas have been brought to the table though. Most probably, but the question should really be would they work as well as keeping with tradition does. And to that, I have no response. There’s that old saying, that if something isn’t broken, don’t fix it. It is also true that certain things can be mastered and perfected and that is what I think we are seeing here with Lik and bands of the sort. And more power to them.

When you boil it all down, the result is simple. In Misanthropic Breed, these veteran Swedes have themselves a well crafted recipe that has been passed down throughout the generations. Lik would have been as at home thirty years ago (Oh how it pains me to think the 90s was three decades ago. Shit) as they are today. Then again, if you look into who the members of Lik are, then it comes as little surprised. Comprised of former members of bands such as Katatonia, Witchery, Carnal Forge, Bloodbath and Repugnant, well, there’s no surprise that these lads can string a few songs together.

This fine slab of old school Swedish death metal can he had by following this link for digital, and this one for physical media copies. You know you want this on vinyl or CD.

For Fans Of: Dismember, Entombed, Fleshcrawl