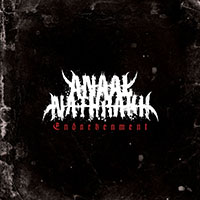 After decades of exploring a genre of music, any genre, you would expect some form of stagnation. Certainly that happens often, providing purists with their traditional sounds. And there will always be room for that. But what peeks my interests, are those that still find ways to push the boundaries of what something can be even decades down the line. Que Anaal Nathrakh. Who have been leading black metal down unexplored caverns for quite some time now.

Somehow, they’ve found new ground again with this, their eleventh album. In the past, these innovative lads have borrowed from electronic music, adding an element that was different, but strange. This avenue wasn’t further explored this time around. Although it is possible that electronics could find their way back to a future album. Then again, it seems the list of possibilities here is an endless abundance without limitations. Glorious. We must salute those that continuously strive for fresh waters. Albeit quite positively foul in this case.

For those with short attention spans, just read this next sentence. Endarkenment is going to rip your bloody face off! There, you can go about your day now.

For several albums now, Anaal Nathrakh have used various vocal techniques. Some guttural and grunted, a healthy portion of wretched black metal screams and thunderous cleanly sung passages too. Such is the vocal arrangement of this avant garde, boundary pushing collective. But wait. There’s more. There is now glorious squeal added to the oral repertoire. Granted, just for the one track but I can’t get enough of it. I have listened to “Libidinous” more frequently than the rest of the recording combined – and let me tell you, that is a lot.

Primary interest, or addiction I suppose is a more apt term, is due to this newly added vocal range. If you were to kidnap King Diamond, bind him and squash his balls in a vice, this is the sound he would emanate. And it is nothing short of glorious. I mean, let’s not harm the King in any way though. That just wouldn’t be cricket. “Libidinous (A Pig With Cocks In It’s Eyes)” is by far my favorite song on the album. That’s one hell of a song title though, isn’t it? Why would a pig have cocks… in it’s eyes? I’m not sure I really would want to know. So lets move on, shall we.

This is a delight to listen to, and I found myself yearning for it on my daily travels despite a large number of new releases in my email. I suppose that speaks volumes for what Anaal Nathrakh have achieved here – even if I can’t yet remember the spelling of the band name after all these years. Maybe one day, but surely not today. I was curious enough to look into what the name meant anyway. Turns out, the band’s name is Irish for snake’s breath (anál nathrach) and was taken from Merlin’s Charm of Making in John Boorman’s 1981 film Excalibur. Well then. I was going to guess it had something to do with Tolkien and The Lord Of The Rings. So many band names have derived from that material, alas not this time.

Endarkenment has all the qualities an extreme music aficionado relishes. It checks off all the boxes. Furious drumming. Check. Break-next speed. Check. Brutal yet melodic riffing. Check. Solid and varied vocals. Fucking check. Chaos. Yes, total aural chaos is in abundance here too. This is simply fantastic. I can’t count the times I’ve fist punched the sky to this record.

You can pre-order your copy on vinyl, compact disc or as a bundle on the Metal Blade website. I did.