Megadeth
The Sick, The Dying… And The Dead
Universal Music Group
Released: September 2, 2022

Members of the famed big four of Thrash Metal, Megadeth return with a long awaited new record – The Sick, The Dying… And The Dead. 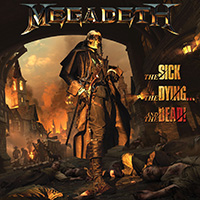 Incredibly, Thrash metal icons, Megadeth, are on the cusp of releasing their sixteenth studio album. For a time, Megadeth looked to have been on the fast-track to oblivion, releasing some of the worst albums the metal realm has ever seen, in Cryptic Writings and Risk – two records that followed the biggest grossing records in the groups history up to that point (Countdown To Extinction and Youthanasia). Megadeth eventually returned to their roots and returned to thunderous form on 2016’s Dystopia, the predecessor to this new album.

The lead-up to this record has been turbulent to say the least, with every possible scenario imaginable seemingly against The Sick, The Dying… And The Dead ever seeing the light of day. From serious illness, a global pandemic and the firing of Dave Ellefson following a scandalous accusation of the bassist and Megadeth co-founder caught in sexually explicit videos of him masturbating while chatting with an under-aged girl online. Front-man and guitarist Dave Mustaine underwent fifty-one radiation treatments and nine chemotherapy sessions during his battle with cancer – won the war, and tomorrow the new record will be released. Iron will.

The group again went through a seemingly endless revolving door of musicians following the rotten record known as Super Collider, and the end once again seemed nigh. Yet Mustaine’s resilience again shone through the ashes and Megadeth struck back with the brilliant Dystopia album – leaning heavily on the sound of their Youthanasia era mixed with all the things they had done well on Endgame. A lot of the credit for the Dystopia record should fall atop the shoulders of guitarist Kiko Loureiro who melds incredibly well with Mustaine, laying down a smoldering one-two punch combination. Loureiro replaces an icon in Chris Broderick, and I would wager that nobody expected much from that recording once it was announced that Broderick was no longer apart of the tribe.

Following the departure of  Ellefson, Megadeth brought in the masterclass that is Steve DiGiorgio to record bass lines on the new album. Like the changes made on guitar, the addition of DiGiorgio is a game-changer. Ellefson’s departure and the six-year break between albums, and everything else that has transpired in-between them, would have given Megadeth every excuse to release another stinker like Super Collider – but instead, they release a solid record here, with The Sick, The Dying… And The Dead.

There are some really strong tracks on The Sick, The Dying… And The Dead – as well as some mediocre moments as well. The key take-away here, is that the positives fairly strongly out-weight the negatives; this isn’t a perfect record nor is it the bands best works, but artists seldom eclipse their swansongs later on in their careers. This should be taken as a grain of salt – a complementary addition to a strong catalogue, and hell, lets be thankful not to have another Risk on our hands. (I’ll never never stop bagging on that album. Ever.)

Mustaine and copy do their best to channel back to the Rust In Peace era on Soldier On, which is one of the better tracks on the album, while tracks like Célebutante attempt to recreate the magic found on albums such Countdown To Extinction or Youthanasia. Personally, I’d call either Night Stalkers (which features the great Ice-T of Body Count) or  Dogs Of Chernobyl the album’s highlight.

Read More:
>> An ode to Slayer
>> Diamond Head to re-issue their debut album, Lightning To The Nations
>> Pantera Albums Ranked From Worst To Best

Unfortunately, not all is well here – as two tracks are only available digitally – meaning that the physical versions will not contain Police Truck, a Dead Kennedys cover track, nor This Planet’s On Fire (Burn In Hell) which is also a cover song, that features the incredible Sammy Hagar on a song he wrote. Maybe it is my deep disdain of all things streaming talking here, but I feel that the physical media versions are the ones that should have the bonus tracks.

Services (and I use that word with venomous spittle failing from my mouth) such as Spotify rip off the artists they make bundles of money on – and musicians see more revenue from physical media sales. I don’t understand this move or its motive.

Pre-orders are live with versions on compact disc, vinyl and cassettes  available as well as a slew of digital options. Buy your copy by following this link. They’re pretty expensive, mind you.