Earth is about to shake again, as Primitive Man return with a new recording, titled Insurmountable. 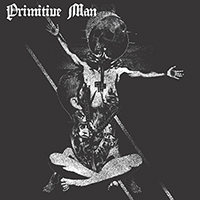 There was a time, where people considered the mighty Motorhead to be the loudest band on earth. Things happen. Things change. Volumes increase and the low gets seriously low. Having seen both Motorhead and Primitive Man live, I’d reason that the two are gargantuan in their own rights. Monsters of their trade. But I have seen, no, felt Primitive Man live. With every molecule of my mortal bodies structure. They are equally impending on their recorded works, too.

In order to properly enjoy a body of work such as Insurmountable – or anything by Primitive Man or similar artists, one must first adjust their approach. Switch up their expectations. Change their thought process. If a listener comes into Insurmountable looking for big riffs, shredding guitar solos and catchy sing-along choruses, they will be sorely disappointed. However, that is a doubled-edge sword. Because with the correct mindset instilled. With the proper knowledge of what the listening is getting themselves into, everything changes.

This, like is the case with elder Primitive Man releases – is an experience. Not something to slap into your headphones and hit the gym with. A soundscape. A lesson in darkness. Despair. A hypnotic journey of sonic devastation using reverb as a weapon rather than a sound. Insurmountable creates a trance-like state. An overall sense of dread but also leaves the willing participant listener with a sense of ease. Willing participant. Key words. Alfred Pennyworth once said to Bruce Wayne; “Some men aren’t looking for anything logical, like money. They can’t be bought, bullied, reasoned, or negotiated with. Some men just want to watch the world burn.” Others, like these three lads in Primitive Man, create records like Insurmountable, to portray how they see the world, and I’m not sure which of the two frightens me more.

On Boiled, a dramatic flood of dark ambient and harsh noise elements meld to create a massive wall of sound that permeates the brain – not through the ears, but by way of the pores in your skin. Eating through the human body, and the human condition, with woe and warning. The end is fucking nigh. Cage Intimacy blends the low-end Ragnarok rumble of This Life with the noise and dark ambient elements found on Boiled into something incredible. I haven’t been this impressive with such a thing since Full Of Hell and Merzbow came into in an atom smashing display of power.

Finishing up, the experience comes to an end with Quiet a Smashing Pumpkins cover. No words. And yes. You did indeed read that correctly. Even Amber Heard’s lawyer read that properly. I’d wager a fistful of cash, if I had any, that if this version of Quiet were played to fifty Smashing Pumpkins fans, not one would pick up on it. Maybe one. Two at most. Yet, the fact remains that this is a rather unique cover, that fits in well with the rest of the recording and actually ends things off really well.

When Primitive Man comes to a town near you; go. See them. Experience the ultimate form of heavy. You’ll feel it in every hair on your body – and other places, surely, as well. Until then, visit the Closed Casket Activities online store to obtain a copy of this impressive slab of Doom.

For Fans Of: Unearthly Trance, Man Is The Bastard, Bastard Noise