The inevitable return of the great Ghost is finally upon us, with Impera, their fifth studio album. 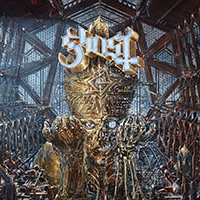 Initially, Sweden’s trope of international mystery, was set to release their new record last year – but like many other artists, chose to wait out the pandemic before unleashing their new works. Strategically, it makes sense to wait for a time when an artist can tour for a new album, but surely there will now be a monstrous clash as artists all compete for the pocket money of their fans, whom have also suffered through this global set-back. Gas prices are at ridiculous levels, unemployment still rampant – and we’re now sat on the edge of a potential nuclear holocaust, with the trigger sat firmly under the maniacal Vladimir Putin’s middle finger. What a time to be alive.

Leading up to this record drop, Ghost had released three singles, starting off with Hunter’s Moon, which was featured on the Halloween Kills soundtrack, then a catchy little number named Call Me Little Sunshine, and finally Twenties last week – a track that left much to be desired and had many question what direction the group, who have been walking that thin veil into pop territory with reckless abandon on recent recordings. Truthfully, none of the three singles really hit home or screamed hit, and that was rather worrisome. Had the fame finally turned them away from their dark roots? Those were questions that could only have been answered once the completed works became available.

Usually, the Nameless Ghouls are, well, nameless – yet the newest ghoul has a name, and his name is Fredrik Åkesson, Opeth guitarist and formidable musician. Known for his impeccable riffing, there certain is no doubt as to what Åkesson brings to Impera. There are several progressive rock pieces throughout the record, moments of pure guitar brilliance – and they all have his name on them. What Impera does, is to drag the progressive rock world back to the forefront of popular music, without sacrificing any of the groups past gothic tinged elements. These are huge arena rock anthems the like of which haven’t been seen in decades. Most of all, this is fun.

As soon as Kaisarion hits, any doubts I had previously were squashed, and a smile on my face grew so wide, that I felt my jowls begin to rip as it stretched ear to ear. The moment Papa Emeritus’ first notes hit the airwaves, I felt as if transcended back into to the rocking 1980’s – something that Ghost has teased and toyed on past hits such as Rats, Square Hammer, Kiss The Go-Goat and the numerous covers of other eighties artists, done with that patented Ghost twist. Impera is unapologetically a tribute, a hat tip, to the entire eighties rock decade, and I can’t get enough of it. Kaisarion kicks off with a howl that would make Van Halen fans shit themselves.

On Spillways, the sound is unmistakably Ghost, but the underlying elements, like the plodding keyboards, the lead licks, and guitar mastery – toppled with the incredible vocal hooks of Papa Emeritus (or Tobias Forge if you’d rather) are unbelievably good. Melodic, creative and captivating. Watcher In The Sky has such a staccato rhythm, a romping power ballad of a song, incredible chorus and manic guitar work make this one of the many highlights on the album. Also fitting of that nomination, is Darkness At The Heart of My love, which features a harpsichord, played over snapping fingers, over a pop beat. I could do without the beat, even though it works here – pop has always been an undertow on Ghost records, one that hopefully never encapsulates what Ghost is, at its root.

I must admit, I still don’t like Twenties, at all, although it does sound better once heard along with the rest of the album. Lyrically, it lacks the usual wit and character that is constantly found on a Ghost track. It’s overly simple, drum and bass driven pace feels odd and off. Minimalistic for a band that normally holds so much in its music. Undoubtedly nothing more than filler – although I do dig the orchestral segments within it. Still, one bad apples doesn’t ruin the bunch – at least not here, it doesn’t. I suppose the concept was interesting, albeit poorly executed. Comparing modern happenings with those a century ago, leaving a global pandemic again, as predicted on Prequelle, feels like a light-hearted jab, an I told you so.

How little faith I must have had in Papa Emeritus and Ghost, to have ever doubted that they would let down their legion of fans. Had Ghost have released tracks like Kaisarion or Spillways as a single in place of Twenties – I would have pre-ordered the record from the start. Oh wait, I did blindly pre-order it the moment it was announced. Silly me. The only question that remains, is how much bigger can Ghost possibly get? Where does this record place them when it comes to touring – surely, they’ll play to sold out arenas across the globe with this masterpiece. I firmly believe that Impera is the tipping point for Ghost. It has been a long time since the metal realm has had a champion that could reclaim the mainstream throne, while still appeasing the metal hordes; yet here there are. Ghost reign triumphant.

An absolutely ridiculous number of variants are available for purchase, with at last count, twenty-four different vinyl variations for sale, and new colors popping up daily. With so many options, fans have the option to search their local stores or hunt down copies flogged around the internet – or you could just follow this link and state your claim to a copy from Loma Vista recordings. Whatever course of action you do undertake, be it known that Impera is worth the purchase. Big time.