Philadelphia’s Stolen Wheelchairs have been accused of sexual misconduct while on tour with The Casualties.

Allegations, that undisclosed members of the punk band, Stolen Wheelchairs, dug through a women’s purse without prior consent and without her knowledge, at an after show party in New Jersey on February 19th. They then went through the phone, found nude photographs of the owner and sent the photos to a number of people in the woman’s contacts list. As if that wasn’t enough, several members of the band then saw fit to photograph their genitals and send those photos to people in the woman’s contact list as well. There are also reports the group played part in destroying he house at which this party took place.

Although the band themselves appear to see their actions as minor, they are facing a barrage of backlash as a result. They have been removed from the tour they were on when this incident took place, opening for The Casualties, and have been dropped by their record label, SBAM Records, as well. Others certainly do not share the same view, that this was some form of harmless prank or excusable due to an over-indulgence of alcohol. Actions such as these are simple inexcusable. 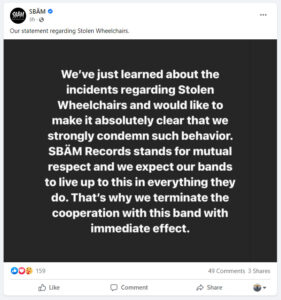 Recently, Stolen Wheelchairs announced that they would be working with Austrian record label SBAM Records – but that window has been slammed shut by the label, who took to their own social media pages to denounce the actions of Stolen Wheelchairs, and drop them from their roster. That statement reads as follows; “We’ve just learned about the incidents regarding Stolen Wheelchairs and would like to make it absolutely clear that we strongly condemn such behavior. SBAM Records stands for mutual respect and we expect our bands to live up to this in everything they do. That’s why we terminate the co-operation with this band with immediate effect.”

Furthermore, Stolen Wheelchairs then took to their own social media pages to slap up the most half-assed and insincere apology letter of all time. Stooping as low as to point blame at their victim. Pointing their fingers at cancel-culture, when they should be reflecting on their own behavior instead. It would appear also, that Stolen Wheelchairs intend to continue creating music, albeit without their record label, with a tarnished name and the high probability that other artists, venues and promoters will more than likely refuse to work with them. Then, there are the fans to deal with – who won’t take kindly to such sexual predatory actions.

Below is a statement that Stolen Wheelchairs posted on their Facebook page.

“Ok, so it is wholly appropriate that we address the ongoing situation in which our name is being associated with a varying degree of inappropriate behavior.

On Saturday, February 19th, four members of our band went to a friend’s house for an after party. Throughout the night an over consumption of alcohol resulted in some of us being disrespectful to our friend’s house. Throwing shit around, spilling stuff, and just being drunk assholes. Nothing we are proud of, but nothing tantamount to the egregious things of which we’ve been accused.

At some juncture in the night, a phone was discovered at the party. Some members of our band went into the phone and began invading this person’s privacy by going into their private messages with their partner. There were intimate photos discovered and they were disrespectfully and immorally sent to a few mutual friend’s of this person and the band. Some of these photos included nude images of one of our members who was previously in an explicit, consensual text exchange with this individual in the past that had already existed on the phone. In addition to that, various people at the party, band members included, sent pictures of their testicles to the partner of the phone owner.

We are not explaining this in an effort to absolve ourselves of wrongdoing but merely to provide additional context for the nature of our transgressions. We are at a very interesting point in our culture where the ubiquity of social media, paired with the increasing awareness of sexual predation has also lead to hyper-vigilance. We hope we have been able to provide additional context to a situation that is falling prey to whispering down the lane until the facts of the incident are being so heavily distorted that the average hearsayer has no choice but to assume the worst.

We are not proud of our abject stupidity and disrespect. We also can only imagine how hurtful this was to the parties in question who have been violated by our behavior. With that all in mind, we must let you know that we fully intend to keep making music. We are not, have not, and have never been predatory in nature. We are, admittedly, fucking idiots sometimes and unfortunately that stupidity has resulted in hurting other people. However, the idea that people who falter are beyond a place of redemption, is an untenable way to approach human impropriety.

If you are without fault in your life, I implore you to continue your crusade. In the interim, we can only apologize and promise to not behave so foolishly in the future.”

Stolen Wheelchairs where on tour in support of headliner The Casualties when these events took place. A band who themselves have had numerous allegations of sexual assault against them – namely on former singer Jorge Herrera, who sexually assaulted several women, including an underage girl. Despite leaving the band, The Casualties still carry that stigma around with them.

We at Modern Free Press also vow to never work with Stolen Wheelchairs in the future. There is no place for actions such as these in any scene, in any city, in any place anywhere in the world.