It has been a decade since we last saw Scarecrow, yet their return is frighteningly solid. 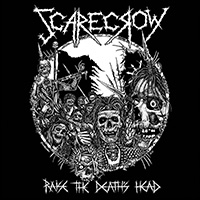 What the hell is in the water that runs through San Francisco’s Bay Area? Whatever it is, it’s been fueling the long-haired into fits of energetic spasm for decades – and that trend isn’t about to expire here. Long considered the mecca of Thrash metal, and for good reason – as it continually spawns great thrashing acts. Scarecrow are not a new band; they’ve just been hangin’ out on the couch for a decade, swillin’ beers and kicking back.

There may only be three tracks on Raise The Death’s Head, yet these lads pack punches in bunches. Featuring members of Exhumed, namely one Matt Harvey who tackles guitar and vocal duties but not how we’ve grown to know him for, Death Angel bassist Damien Sisson and drummer Will Carroll (also of Hammers Of Misfortune), and Exhumed bassist turned guitarist, Bud Burke. This is far from amateur hour down at the jam local on Sunday afternoon. This is an all-out assault! When they’re not playing The Desperate Hours that is – which is more akin to a ballad. But, yeah, those two other tracks are as energetic as chugging a can of Monster energy drink, the green one, then snorting up a line or three. Ah you get what I’m trying to say.

This is straight-up old school Thrash metal. Galloping guitar chops, relentless riffs and breakneck drum beats, and despite the recipe being dated, these three tunes most certainly are not. Sure – it’s been done. So what! Improvement is due for areas of weakness, and isn’t needed when there’s nothing in need of repair. Pryor to Raise The Death’s Head, Scarecrow had only release a split album with Landmine Marathon, back in 2008. This is their first and as of yet only solo release since, and hopefully something that continues onwards.

“When Matt hit me up about reactivating Scarecrow I was thrilled,” said Carrol. “We worked our asses off the first time around but never had a proper recording to show for it. It always felt like there was unfinished business. So I’m stoked for these songs finally seeing the light of day. In a way Scarecrow led me directly into joining Death Angel and now everything has come full circle. I hope you enjoy this EP and there’s certainly more to come.”

The EP opens with the title track, Raise The Death’s Head, an unrelenting piece of old school thrash, with solid galloping guitar riffs, ferocious drumming and Harvey spitting much cleaner vocals than we’ve heard him spew before now. Sandwiched between the two scorching trash tracks, is The Desperate Hours, an old-school power ballad. Slow, yet powerful and with some wizardry on the strings. Finally, Raise The Death’s Head concludes with Victory?, an aggressive and balls-to-the-wall shredder, and quite possibly the strongest entry of the trio.

You too can own a copy of Scarecrow’s New EP, Raise The Death’s Head, by swinging by your local record shop or by putting in a pre-order in over at the Relapse Records online store. Get some!