Montreal’s Smoke Spell are about to release their debut EP, Don’t Die Before You’re Dead, on Hot Soupe Music. Break out your dancin’ shoes! 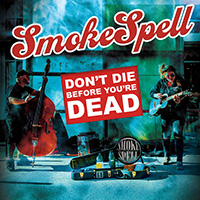 A new collaboration between Montreal musicians Krystal McKillop (Chix N’ Dix) and Jason Lariviere (Hobo Outlaws, Heroin Hayride) named Smoke Spell, a unique blend of folk, bluegrass and a punk rock attitude. Where there’s smoke, there’s fire they say, and you can’t argue those tried and tested old theories. With just five songs that clock in at just under a quarter of an hour, Smoke Smell make themselves known.

In the last few years, more and more punk rockers have been unplugging their instruments, and going acoustic in one form or another. Some simply jam their tunes unplugged, while others are turning towards more country-like vibes. Bluegrass and folk. Although that is true for McKillop, the inverse is true for Lariviere, who has been kicking around the more country-styled scene for quite some time now. Although he himself does also come from a punk background, the bands he has played with have always been a little bit country, a little bit punk rock n’ roll. The sound may differ but the punk attitude never dies.

The vocal range of McKillop is impressive, and has grown significantly since her days fronting punk rock band Chix N’ Dix. Less aggression and teen spirit these days, instead McKillop belts out powerful and strong, concordant and mellifluous; anybody that has heard Smoke Spell’s cover of Dolly Parton’s Jolene knows what I’m getting at.

The EP’s best track, is the one that gets it all kicking off – Sandman, which opens with a splendid riff and moves into a rhythmic piece, with a thunderous chorus. With Lariviere plodding along on the upright bass, adding gritty vocals to counter those of McKillop; creating harmony, like sweet and sour chicken or peanut butter and jelly! Opposites attracting. On Devil’s In The Ditches, McKillop sings about Aboriginal women going missing throughout Canada, a topic that is sadly very much on point these days, with all the discoveries of the remains of Indigenous children being found across the nation.

If Sandman is the best track on this release, then it is closely contested by He Stole My Soul, which is a sweet tune about falling in love. It’s the vibe of the song that gives it it’s prowess, though. It feels like a throwback to a simpler time, when music wasn’t mass produced and things happened more organically. A smooth out to a fun, albeit short, first effort from a band we’ll surely be hearing more about in coming times.

Smoke Smell’s debut can be purchased, in digital or Compact Disc format, through the duo’s bandcamp page. Grab yourself a copy! Mixed by Tom Shemer of The Damn Truth, mastered by Andy Vendette and produced by Jesse Stone – which all accounts for the supreme sound quality found on Don’t Die Before You’re Dead.