Life can be a cruel bitch at times – yeah, everybody knows that; why am I bringing it up now, you ask? You didn’t ask? Too bad. There was a time where I had to sell off a large part of my music collection in order to pay rent. One of the albums that I parted with was Spazz’ “Sweatin’ To The Oldies”. 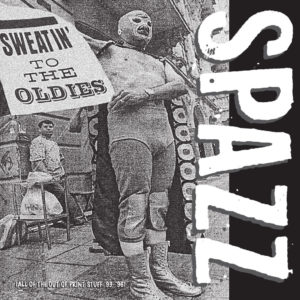 I loved that record! So, you can imagine the school girl giggles I emitted when my phone buzzed, and an email popped up telling me that a re-issued version of this was now sat in my inbox! (As well as another Spazz re-issue – but that’s a separate review you’ll have to wallow through. Punk)

There’s two ways I could go about this; a) Act like everybody (OK, both of you) reading this knows all about Spazz or b) treat the reader like an ignorant wanker that has been blissfully unaware of this project and everything associated with it.

Well, you know how there’s all those annoying warnings on products? Shit so simple that everybody questions why companies even bother printing any of it. That’s all because some dickhead actually did all the things the rest of the populous knows not to do. Who would think a fresh cup of coffee would be hot! Or drinking bleach would do more than just whiten teeth.

The band’s moniker is basically a blatant clue as to what you’re in for once the needle hits the wax or the laser zaps the disc. And if you need me to explain what that is – you’re the one those warning labels are made for. Way back in the 80’s, a new sub-genre of Hardcore Punk was emerging called Power-violence, and Spazz were key players in that whole escapade.

Not just for the music they created but also for the two record labels the bands members formed. Three guys, two record labels. Makes me wonder what that third guy was doing? Anyway! Chances are, if you’re into Hardcore, that you’ve heard of the now defunct Slap-A-Ham Records. Yeah! Enough chit chat, onto the album.

Spazz were an erratic and chaotic band, with a sense of cynicism and irony to them. Like many other bands of the genre, their tracks come fast and dirty. But unlike the rest of the pack, Spazz were comfortable pushing musical boundaries. They weren’t afraid to include melody and catchy groove riffs, or even to slow down the pace and just rock out.

Not even Banjo’s were neglected. I mean, sure, a lot of what they did on this record could be considered fairly text book. Palm muted chug-chug guitar riffs, pausing for a tasty bass line and a snare heavy drum beat. Its all the extra sauce they threw in that makes it stick out, though.

This is a quintessential Hardcore record and is still as relevant today as it was the day it was recorded. You owe it to yourselves to check this out. Seriously, I’d be disgusted to find out there are still blissful fools that have not yet heard this record. Even more-so to learn that the unlearned haven’t yet picked up a copy of this re-issue.

For Fans Of: Brutal Truth, Man Is The Bastard, Capitalist Casualties