One thing that I have come to accept, is that you never fully know what to
expect from a Fuck The Facts release. 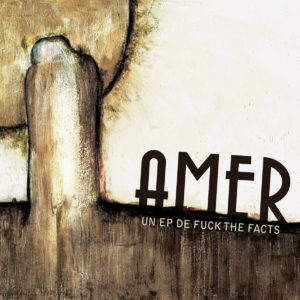 Sure, you can assume to a certain extent but there really seems to be no formula
when these guys are writing. To say they’ve come a long way is comical in its
understatement. Beginning as a one-man band, producing noise and pure Grindcore,
before forming an actual band and becoming perhaps subconsciously more focused on
composition with each release. Fuck The Facts have out-done themselves once again.

Following up on 2011’s “Die Miserable” record, which in itself was an album
fueled by progression from past material (as was “Disgorge Mexico”; I’m starting
to see a pattern emerge here), the seven tracks on the “Amer” EP show a maturity
in song writing that is quite honestly surprising. There are still moments where
the blast beats are in full effect and then there are segments on songs such as
“A Void”, that are well written and melodic, ending off with a strained vocal
that emanates and reminds me of something Tragedy might do. Its back to the grind
for the following track, but that one also has a melodic passage to it, too.
This is quite possibly their most accessible recording ever to date, and is
rapidly growing on me with each listen.

Comprised fully of French language lyrics this time around, something that
doesn’t phase adopted Montrealer’s such as myself, is also something slightly
new for the band. Previous recordings have had French tracks on them, but this is
their first adventure away from the atypical Anglophone norm. Anyway, lets not
get the language debate cooking; wouldn’t want Pauline Marois’s hounds beating
down my door, demanding I re-write this out en Francais, tabarnac!