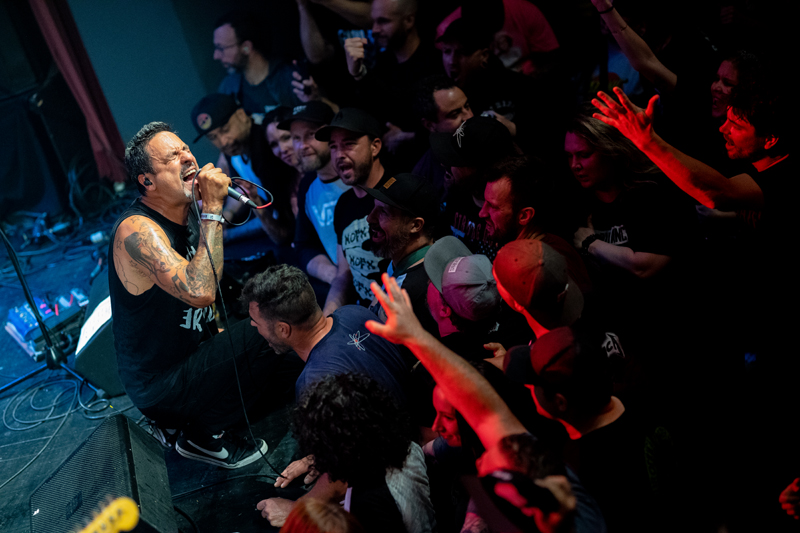 The second night of the Montreal portion of the Red Bridge festival went down beautifully on Thursday night, as veteran skate punk giants Jughead’s Revenge, Pulley, Guttermouth and Strung Out took over Club Soda. If this gang of bands was to outperform the likes of the Satanic Surfers, No Fun At All, Chaser and Colorsfade that had put on a banger of a show the night before – well, they had their work cut out for them.

Having these shows in Montreal, before the main Red Bridge festival that will go down on the 3rd and 4th of June –  graciously setting up three shows in the fine urban setting of Montreal. Two of those take place before the main event, with this being the second, and a third and final show playing out the day after the festival this coming Sunday night.

Once more, this was a celebration of mid-90s era skate punk with some of the biggest names in the genre making appearances. The soundtrack to my high school days. Well, the punk part of it anyway. I was always that weird kid that was into a bit of everything. Cool the skaters and the metalheads, the hip hop kids and the hardcore kids too. That’s common practice today, but back then, that was a paddlin’. 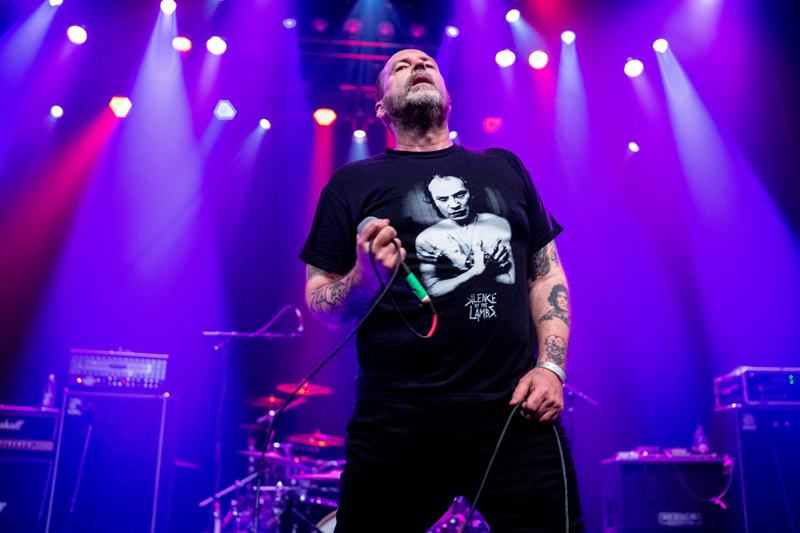 When the night opens with a band such as Jughead’s Revenge – you can rest assured that is going to be one epic night of punk rock debauchery – and that was exactly the case on this fine night. Of the four groups playing this gig, Jughead’s Revenge were by far the more serious – and only act to not look as if they were fully in party mode. I suppose Montreal has that effect on people, and at this stage in their collective careers, I would imagine seeing old friends in foreign lands is as good a reason as any to kick back, let loose and let out the demons.

The longest running out of all those to perform on the night, Jughead’s Revenge brought forth a solid set to a fairly packed room and were rewarded for their efforts with a barrage of cheers and clapping hands. Judging by the banter between songs though, it would seem that frontman Joe Doherty isn’t too pleased with the current state of things in his homeland. He asked if anybody in the crowd would adopt him so that he can stay in Canada.

“We’re not going to be that asshole American band that talks about poutine” said Doherty. It’s surprising how many artists associate this city with fries, gravy and curd cheese. And igloos, for some weird reason. I mean, we have other things here that we should be known for like… uh, shit, wait, um, hmm. 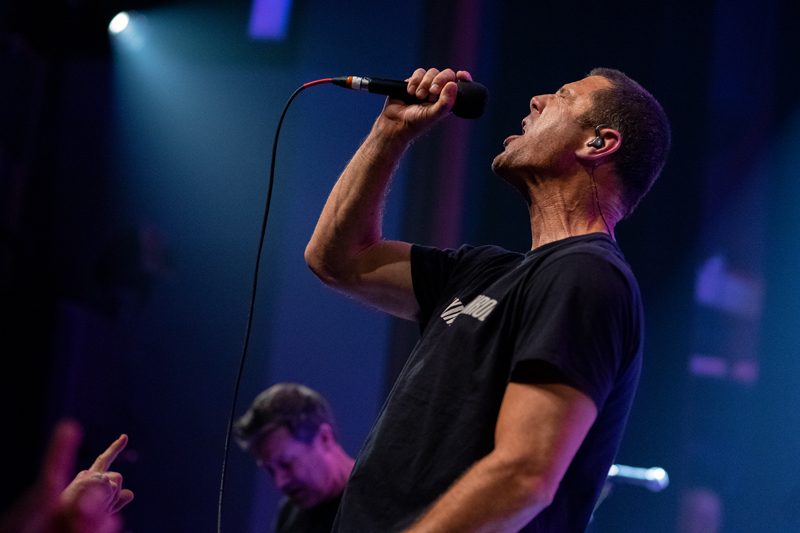 Up next, was California’s straightforward, hard-edged, certainly not straight-edged melodic punk rock powerhouse, Pulley. Another group from the hay day of skate punk that is thankfully still prodding along, seemingly having as much fun now as they ever did. Young until they die, and like the vast majority of the audience that came out to witness this show, not going any younger. So many faces are no longer found in the music halls they once haunted religiously, making me appreciate all the bands that still love what they do that much more.

Vocalist Scott Radinsky fell on two occasions, both in comical fashion. First after planting his rather large foot on a tipsy stage monitor, then tripping over his own microphone cable into the drummer, causing the symbols to splash about the place. I can only imagine the fear of drummer Chris Dalley as the huge, well-built frame of former pro baseball player Radinsky came careening toward him headfirst and with momentum. Luckily, nobody was injured and the show went on. Clearly, the party was in full force in Montreal – and had not even come close to reaching its peek yet.

By now, the fact that Radinsky was a professional baseball pitcher and pitching coach in Major League baseball has been written and spoken about ad nauseam; yet still and interesting fact, but let’s not go there. Wait, I guess we just did. Well, shit. Anyway, Radinsky is still a beast and looks as if he could step back up to mound and whip a few fastballs quiet easily. It’s pretty neat to see someone return to music following such a sucsessful sporting career – it shows that music is more about love than it is a fast buck. At least proper music is. 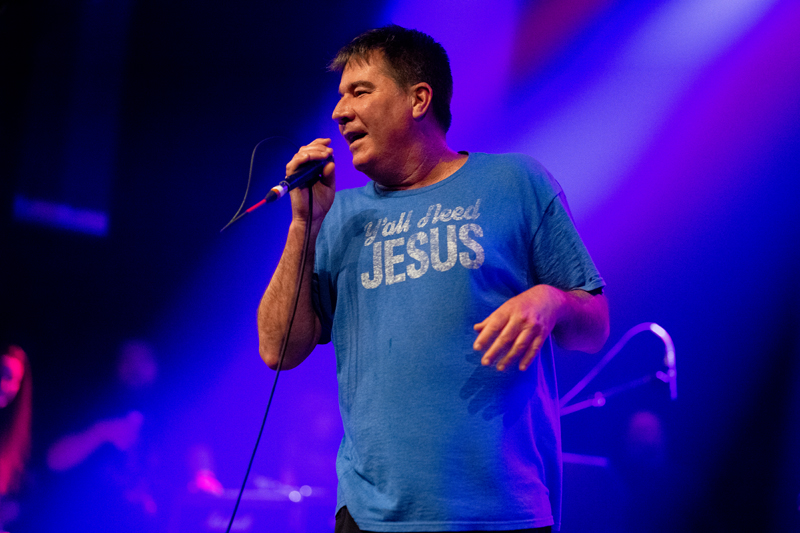 The unusual promenade of vocalist Mark Adkins was, as always, a thing of awkward beauty. To me, Guttermouth is sort of like the musical incarnation of the great Hunter S. Thompson’s Fear And Loathing In Las Vegas. Take that as you will, as I can’t fully explain why I feel that way. Although I haven’t seen them outside of their variations dates across Quebec, it would still seem that once they enter this territory, something goes off in their collective psyche that just yells this is bat country.

This time around, Adkins spent the whole show on the stage – without venturing beneath it as he has done at past shows in the province, and without goading the crowd to circle pit around the only pole that held up the tent under which the band were playing. Which, also happened. Yes, you could say the guys in Guttermouth are trouble making punk rock deviants that are out for a good time, a cheap thrill and always appear to have been at some sort of illicit substance prior to performing. Quite honestly, a Guttermouth gig simply wouldn’t be the same if these boxes are not checked off of the itinerary.

Nobody – and I mean nobody in the punk rock realm, gives of a sense of mischief and fun the way Adkins does. The man is a joy to witness and listen to. Watching Adkins sipping from a tiny wee wine glass was also quite amusing. How rare it is, to realize that every time I see Guttermouth, I am left with a big stupid smile glued to my face. On this night, the boys put together a solid set that was both tight and high energy – and that is all you can really ask of live punk show. The energy that emanates on the stage is often reflected in those on the floor below and tonight was no different.

I’m not fully sure what’s going on with Club Soda and their security people though. Normally, they have they own team in place, but tonight, it seems a third party group were on scene. A militant group dead set of stopping any form of outburst or fun. Crowd surfing? Fuck that! Moshing? Oh nay nay! At one point, an enthusiastic crowd member made his way onto the stage to dive off of it, only to be hotly pursued by one those aforementioned fun-hatin’ ruffians who grabbed the youth mid-dive and potentially could have caused him an injury. Adkins rightfully told the security guard to relax a little and let the people have fun. Hopefully this was also noted by the head brass at Club Soda. 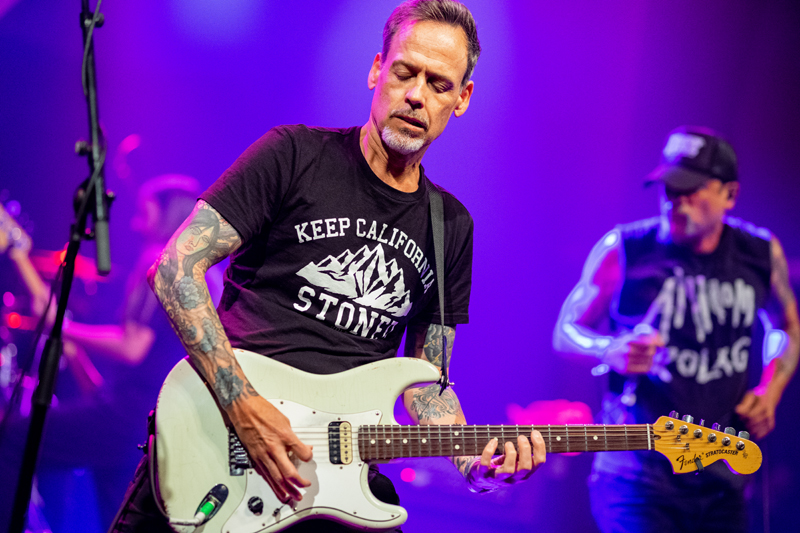 Any time Strung Out are in town is a good night, even if they are a far better studio band than they are a live act. There, I said it. Don’t get mad – it’s just the facts. That said, I still seldom miss a Strung Out gig. However, Strung Out’s last visit to Montreal and Club Soda was a difficult one to witness. Not through any fault of the band but whomever was running head of house shouldn’t have been – as the sound was an absolute disaster. When it is painful to be within a country mile of the stage because of the ridiculously high levels of bass, to the pain that it almost endues vomiting – there is an issue. Thankfully, that wasn’t the case this time around and Strung Out could be properly enjoyed.

I will be the first to say that vocalist Jason Cruz has one of the better voices in punk rock – but he is far better on studio recordings than in person. Don’t ask me why, but I’ve always felt that way. Strung Out are still a hell of a lot fun live, and tonight was no different. Banging out all the classics like Bring Out Your Dead, Solitaire and Matchbook. Sixteen tracks in all, covering the majority of their illustrious career.

With Pulley bassist Tyler Rebbe filling in for Chris Aiken, who apparently had prior engagements and couldn’t make the show, came an interesting bit of chemistry. Rebbe and Strung Out guitarist Jake Kiley seemed to be having a blast together on stage, dancing and interacting with one another in a set of twists and twirls akin to something you might see in a documentary film on the mating rituals of the pink flamingo. Cute. There is an obvious friendship there and was very nice to witness the two enjoying their time together.

Meanwhile, a clearly intoxicated Mike Harder, of Pulley, was sat cross-legged next to Rob Ramos’ amplifiers, gulping huge swigs out of a bottle of tequila and looking to be having more fun than anybody else in the building. Harder issued hugs to everyone on stage on multiple occasions, and provided the performing musicians with sips from his massive bottle. Blue label Jose Cuervo. I can only imagine the hangover Harder must have had by the time he and Pulley reached the main Red Bridge festival in beautiful Pont-Rouge, Quebec. Harder amusingly kept swaying out of his hiddy-hole to wave at his pals and give thumbs up to his bandmate Rebbe. Whisper comments to Ramos and even earn a warning from a security guard when he attempted to smoke a joint on stage. Weed might be legal in Quebec – but we still aren’t allowed to smoke it indoors.

Cruz though, got away with sparking a joint late in the Strung Out set, after all the over-zealous security agents had magically vanished. From over-aggressive and violent actions towards audience members, trying to prevent the dancing and crowd surfing to being completely vanished.  Obviously, this was a security team that has never before worked a punk rock show. After a few puffs, Cruz passed on the joint to the only other Mexican in the crowd – a fact discovered when himself prompted to audience in search of other Mexican participants. One. “Only one Mexican” chuckled Cruz in almost disbelief.

If Strung Out’s last Montreal gig, back in 2019, had left a bad taste is anyone’s mouth – it was all forgiven now. (Again, I blame the sound engineer for that though.)

The main portion of the Red Bridge festival goes down tomorrow and Saturday in Pont-Rouge, Quebec – and tickets are still available. Then, the action returns to Montreal as Less Than Jake. Voodoo Glow Skulls, Craig’s Brother and Much The Same stop by the Club Soda for a final hoorah. Tickets for that show are also still available – for now.

What a great night out this was!