It wasn’t all that long ago, that the highlight of the summer, if not the year, was the punk rock refugee camp known as the Montebello Rockfest. Without any announcement on a new edition of that festival yet, and with its decline in recent years, due to – let’s say, financial reasons, and the deadly silence from Evenko on their annual ’77 festival, means that the gates are wide open for fresh new ventures. Filling that void, are two great festivals – the Red Bridge festival in Pont-Rouge, Quebec and, of course, the Music 4 Cancer event in Ste. Therese that will be coming up at summer’s end.

Our focus here, is on the Red Bridge festival that will go down on the 3rd and 4th of June – but prior to that, the festival has graciously set up three shows in the fine urban setting of Montreal. Two of those take place before the main event, with the third and final show playing out the day after the festival – for those that just can’t get enough, and who can? Am I right? I am.

Especially when the shows in question have the rosters that these three gigs do. Tonight, on night one, Montreal was privy to sets from Gatineau’s Colorsfade, Orange County, California’s Chaser, and a pair of great Swedish bands in No Fun At All and Satanic Surfers. Tomorrow night will see the likes of Jughead’s Revenge, Pulley, Guttermouth and Strung Out playing this same venue before they all travel up into the countryside of beautiful Pont-Rouge. Sunday night, some of those bands playing the festival will return. Less Than Jake, Voodoo Glow Skulls, Craig’s Brother and Much The Same will cap off a solid slew of shows.

With this year’s Pouzza festival rolling out a very scaled back and smaller incarnation of itself – this instead takes its place as the unofficial official start to the summers music festival season. Let’s not beat about the bush here, either – this is an incredible set of shows here before us. The epitome of the mid-90’s skate punk scene and an era that I hold dear to my heart. A carefree time when I could still skate without feeling like every bone in body was about to crumble away and my hips would surely shatter should I hit a rock and tumble off my deck. Nah, these days, my skateboard sits permanently under my desk, used as a perch while I write stuff like this is, and reminisce – but enough of that! 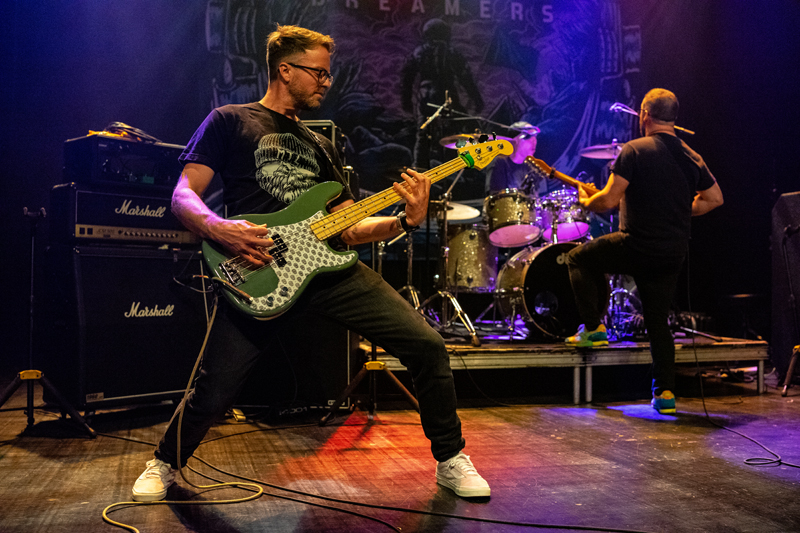 Gatineau’s Colorsfade have the distinct honor of being the only band on this international roster of being “local” – if you can count a two hour drive as being local, that is. The sole group from the province to play the Montreal portion of the festival, and judging by their highly energic set tonight, it is easy to see why they were the Quebecois ambassadors on this night. Playing that opening slot in this city, is never going to be easy. With all that Canada’s sin city has to offer, and with this being in the former redlight district of Montreal – there remains much to keep folks occupied when they should really be inside the venues, checking out the lesser-known bands. One day those ignored smaller bands could be the ones bringing people out to headlined gigs – I’ve seen it happen so many times.

Still, With each strummed riff, more and more people poured in and a decent gathering had amassed by the time Colorsfade handed off to the rest of the groups yet to play. Crowd warmed and a job well done. Playing some solid melodic skate punk, Colorsfade really fit for what was to come – and if fact, my only regret on the night was not picking up a copy of their album on my way out the door. Luckily, there is a new record coming up later this year which hopefully means a return visit to a venue near by is also on the horizon. 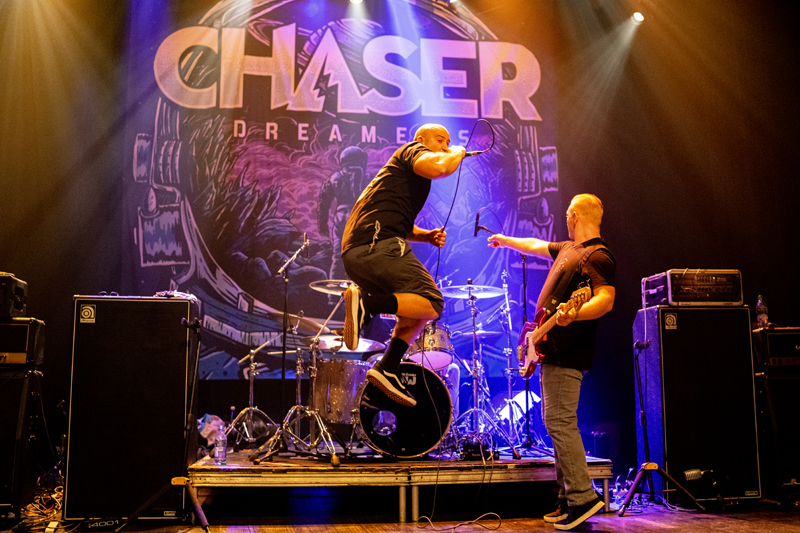 Next up, was California’s Chaser. Like was the case with Colorsfade, these lads would witness their audience slowly grow as their set went on, but by the end, the building was approaching its peek – and those that were inside seemed to appreciate what was happening in front of them. Chaser embrace the mid-90’s era with massive melodies, anthemic choruses and high energy stage appearances – often akin to bands like Pennywise, Chaser are a fun and enthusiastic group that I honestly feel don’t get enough love – they deserve more. Just the way the cookie crumbles, I suppose.

Throughout their set, I was amazed at how energetic Chaser are. I remember thinking something similar when they played at Music 4 Cancer in Ste. Therese a few years ago, and it is great to see that their work ethic hasn’t faded with the times – then again, at a quick glance, it is obvious that these lads are in great physical shape. If I lived in a place known for its gorgeous beaches, maybe I would put more effort into diminishing my ample beer gut – but all we have here is Verdun beach, which just screams might as well sink another Pabst and go for a poutine, because I’m not getting in that water. So, there’s that.

At several times, vocalist Mike LeDonne encouraged people to approach the stage, filling up the gap used by the energetic to mosh and dance, and for the finale of their set, LeDonne took it upon himself to leap off the stage and mix it up a little with the audience. I love seeing that sort of thing – when musicians want to party with their listener.

No Fun At All 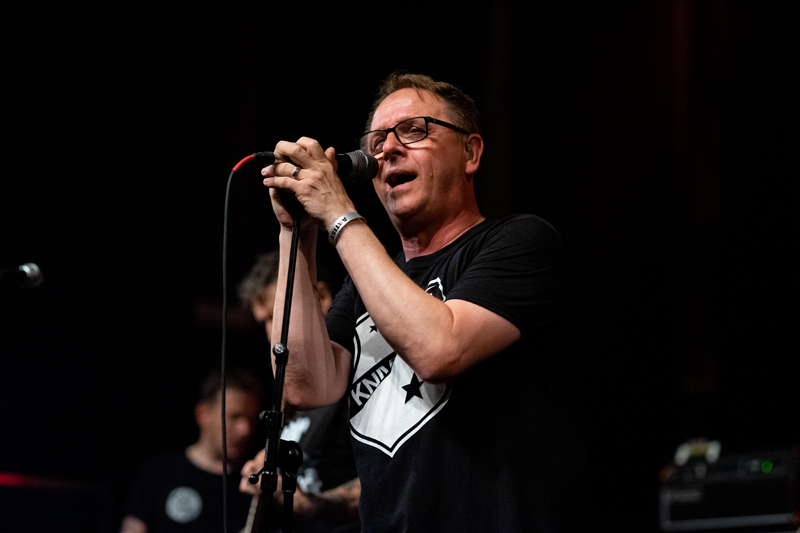 Although every band on this stacked bill brought their A-game, I was most excited to finally see No Fun At All. I have been a fan of theirs for years upon years and have had an startling track record when it comes to missing their shows – and if you have read my thoughts on their most recent record; 2018’s Grit, then you understand what a kick in the pants that has been. No more. Not this time.

I absolutely adore Grit, but tonight, just one song from that record would be played. Because tonight was all about celebrating another of their albums – 1995’s Out Of Bounds. And that was more than fine with me – see, the mid-90s was the pinnacle for this style of music, and although there are still great records on this ilk coming out all the time, this was the time period for the genre. Hearing the album played from start to finish all these years later was nothing short of special. Unlike a lot of older bands, I feel that No Fun At All have matured wonderfully and might even sound better playing these songs today than they did when they were fresh tracks.

A total of twenty-three songs were played on this evening, include all fourteen numbers off of Out Of Bounds. I really would have loved to have more than Spirit off of Grit (I know, I should let if go, right?) but that’s on me for being out of town when No Fun At All played the Foufounes Electriques a few years back. Vocalist Ingemar Jansson has really grown as a frontman, although he has always been a force on the microphone. The power with which he delivers his choruses especially, is phenomenal. Toppled with all the fantastic riff-work from their impressive body of work, makes for a great time.

Turns out, No Fun At All are actually a hell of a lot of fun. Tricky Swedes!

Going into the night with the knowledge that Sweden’s Satanic Surfers were going to be playing their greatest album, in my not-so-humble opinion, in it’s entirety, had me up most of the night. Unable to sleep. Getting to see the Satanic Surfers playing Hero Of Our Time, live, all these years later will almost definitely be one of the highlights of my year when all is said and done. This was an album that I played the hell out of when I was in high school, so very very long ago, and one that could bridge my punk friends and my metalhead pals. A rare feat.

Beyond their fast paced and adrenaline driven songs, it is their fucked up sense of humor that make the Satanic Surfers such a good time band. I challenge anyone into punk rock not to chuckle at the unfortunate lyrics to Armless Skater. Guess if he was sad that day! To think that Hero Of Our Time is the debut record from the Satanic Surfers is mind-blowing. It is a nigh on perfect album. From start to finish. Everything I love about skate punk, all there on this single solitary slab of wax.

Throughout their set, crowd surfers kept the security guards busy with their failed attempts at calming the seas. I can’t say if the crowd surfers were Satanic crowd surfers, not can I say they weren’t. The real Satanic Surfers up on the stage were fantastic, even if I still find it strange to see the vocals coming from the drummer. I should work on getting over that! I can honestly say, that this was the best I have heard the Surfers sound live out of the many times I have been fortunate enough to have shared a room with them. Possibly because the last two or three times I saw them was at an outdoor festival.

Watching Rodrigo Alfaro drum and sing at such a frantic pace is mesmerizing. Almost as much as the permanent smile on bassist Andy Dahlström’s face is. Or the constant emotion in Magnus Blixtberg’s facial expressions, but then again, if I was ripping riffs like he does all night, I’d be making those expressions too. And, well who the hell knows what’s going behind Max Huddén’s epic giant beard! Hearing these lads shred through Hero Of Our Time was better than my dreams had alerted me too, and I feel thankful to have been fortunate enough to have witnessed it. So bloody good.

To think that both the Satanic Surfers and No Fun At All at one point had called their careers quits is a sobering thought. I don’t want to think of a world where bands of this ilk are no longer on a stage somewhere. I know, nothing lasts forever but some things need to go on for as long as humanly possible, and there is a strange comfort in knowing that some bands just won’t quit. This is who we are. All of us.

Tickets for tomorrow night’s Strung Out gig are still available, as are passes for the proper Red Bridge festival in Pont-Rouge and Sunday night’s wrap-up show, in Montreal, that features the likes of Less Than Jake and the Voodoo Glow Skulls. Get your tickets, grab your dancin’ shoes and get your sorry asses to Red Bridge! It’s party time!