Following the release of their new single, Fourth Line, last month – The Nils are on the verge of dropping their new EP, Five Roses; their first new release in seven years. 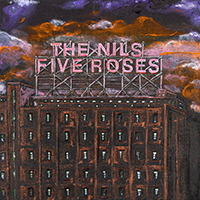 There are many things that are iconic to Montreal; be it landmarks, restaurants, legendary hockey teams and players, smoked meat and poutine or bands – Montreal has it all. Venturing back it time to 1978, when The Nils first came together to form a band that would go on to influence countless artists both locally and abroad, and back to the present day when The Nils again resurface to drop Five Roses, their new EP and first release in seven years. With a cover sporting a Montreal landmark – the Farine Five Roses sign.

The neon glow that emulates light over the city is an interesting reflection of The Nils as a band too. Whether of not that is intentional or not, I am unsure, but like the sign, the band has been through the ringer and still shines. In 2006, the sign was almost removed when ownership of the building upon which the sign sits changed hands, because the company no longer reflected the brand on the signage, and because over the years since it was erected in 1948, it had began to erode and decay. The Nils too, have been up and down, resurrected and thought out, before storming back. A band as iconic as the city itself.

With a fresh new NHL season just barely underway, a song about the grit of hockey from one of the longest running punk bands in the nation hits about right. The lyrics to Fourth Line are glorious, especially to an old fart like me, that not only loves the game of hockey, but the gritty game that I grew up watching. A song about those tough sons of guns that, not unlike The Nils, are vital to a teams success without ever really getting the credit they deserve feels great.

Sonically, Fourth Line sounds a lot like the material found on 2015’s Shadows And Ghosts, with a few hints towards their 1987 self-titled album as well. At just two and a half minutes in length, it goes into the hard areas of the rink, grinds into the corners, digs out the puck and crashes the paint.  And ode to all the grafters. The hard men. The unsung heroes. The Ghost of Sanderson knows. Enrico Ciccone knows. And it shows.

Beginning off with a great riff that flows effortlessly into a really well written yet fairly simple flow, into a solid solo and back. Melodic and hard rocking, with the vocals of Carlos Soria bringing the whole package to life. Fourth Line is a catchy earworm of a tune. It has bite, it has teeth. It shows.

The Second track, Pink Turns To Blue, is a very good cover of a great track by Husker Du; played with a raw and edgy vibe that sounds immediately as if originally written by The Nils. While not the tightest recording you’ll ever hear, it would lose its impact if it was overly polished. While the EP is good throughout, these first two numbers, for me, are the highlights – and I’m not normally big covers, remakes or reimagining’s of anything. Strangely enough, I might also like this version a tad more than the original, too – which again is well out of character for me. I really dig the guitar work here, especially the solos, and Soria’s vocal harmonies on it. Playing both versions back to back – I think The Nils did this song justice.

Losing Ground holds the penultimate slot on the record. From several of the riffs in this track, to some of the vocal deliveries laid down by Soria, there is a strong resemblance, or influence – from artists like Neil Young. Canadian icons at play again. Here, we find The Nils getting into a country or folk-like groove, while still delivering their own medicine.

The final track of the batch, Elephant Trunk, starts with a riff that sounds a whole lot like it came off a Sex Pistols record, and then takes a sharp left turn and becomes its own entity. Elephant Trunk sounds strikingly similar to Pretty Vacant for the first few seconds – then eases up and becomes a different song. Yet, it is hard to get that thought out of your head while Elephant Trunk is underway. While that riff comes back into play later in the song, the overall vibe of the track distracts from that original Sex Pistols thought process. Again, the lyrics mention hockey, the Montreal Canadiens and the Boston Bruins, and comes around full circle from Fourth Line. I really dig that.

This brand new EP from The Nils is available as of November 18th from the bands bandcamp page, with pre-orders for a vinyl release that will see the light of day in March 2023, and will come in either clear of black with both being limited to just a hundred copies each.

For Fans Of: Teenage Head, Replacements, The Minutemen