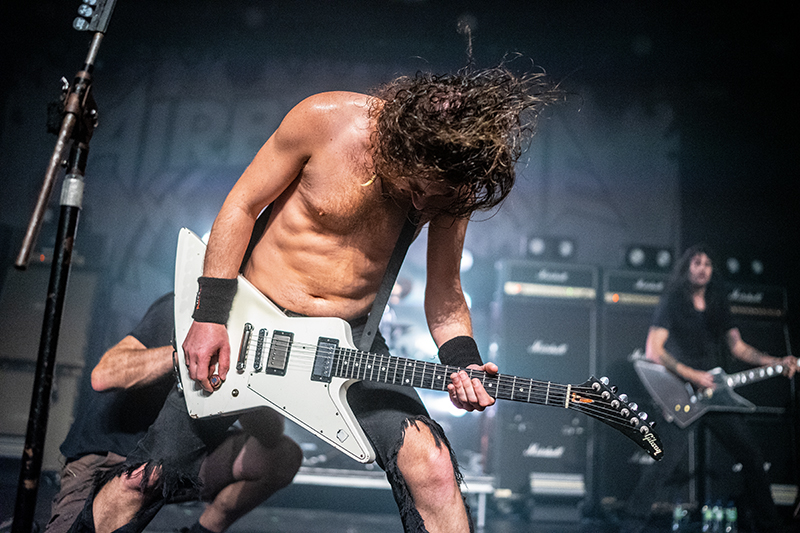 It has been a busy week for hard rock and metal fans in Montreal, with at least one great show each day since Monday when Porcupine Tree were in town. On Tuesday, In Flames headlined a gig at the Corona, Lagwagon played on Wednesday, the Music 4 Cancer festival began on Thursday and both NOFX and Ghost were in town at separate shows on Friday. Saturday night was reserved for Airbourne, with The Native Howl in tow, and they came here to party!

Despite all the big ticket events rolling into Montreal, the Corona theatre was jam packed. Montreal truly is an art city, ripe with culture and there is never a shortage of things to do – and the people that inhabit this fine city constantly turn up to shows, which is one of the many reasons that so many artists adore stopping off in Montreal when on tour. Sure, there are negatives, too. High taxes means less take-home, and there has always been a seedy underground element that likes to break into touring vehicles and make off with gear and anything else they can.

Still, life is all about balance and there are precautions that can be made to ensure that gear doesn’t get stolen. The taxes – well, not much that can be done about that. This town likes to party, too, and the bands that stop in are often surprised by the interactions of the audiences they receive. Some bands though, like Airbourne, antagonize the crowd to act up just that little extra bit, and that is exactly what happened at the Corona theatre tonight.

Detroit’s The Native Howl do things a little differently. Playing a unique style that combines the melodicism and precision of bluegrass with the intensity and aggressiveness of thrash metal, thus creating what The Native Howl like to call thrash grass. Even the appearance of the musicians speaks to this, as frontman Alex Holycross sports the long hair you’d expect from a metal band, and the attire and barefoot of the hillbilly found in a bluegrass outfit.

Other bands such as Days N’ Daze or Railyard Ghosts also use the term thrash grass, although I couldn’t say with any certainty whom coined the term first. Regardless, the common denominator among them all is the highly energetic music that is created. Playing acoustic guitars, banjo, the occasional bouzouki – and an electric bass, The Native Howl produce high-tempo sounds and some killer riffs.  Just how they are able to able to create so much sound from their acoustic instruments is quite interesting.

With a few choice words, their set was done. “We are just fucking shitheels from America and we thank you for making our dreams come true by opening up for the legends Airbourne on this stage tonight”

Tonight, the gathering in Montreal were fully into what The Native Howl brought to the stage, leaving the musicians with a standing ovation from the balcony (the floor was already on their feet) and a serenade of cheers and clapping hands.

Through all the comparisons Airbourne get to fellow Australian’s AC/DC – and let’s be honest here, many of those comparisons are fairly evident and accurate, they also bring a level of energy that AC/DC never really did, and certainly can’t anymore. Sure, there are a lot of similarities, to be kind, but Airbourne still bring a great deal of elements that keep them unique. Few if any bring as much energy to the stage as they do – and in another era, these lads would have been filling arenas around the globe.

At the sides of the stage, are two small veranda balconies that cost an extra fifty bucks to sit on, and space is limited to about fur or so occupants. On this nice, the stage right veranda was occupied by four gentleman who were equally down to party, as one of them hoped over the railing, onto the speaker stack, to the stage before making a running leap over the photographer pit, into the crowd where he wasn’t caught by the shocked and unexpecting audience. Security were unimpressed and on the hunt for the wayward wanderer. Whether or not the man was ejected or not, I’m unsure, but the four people in that veranda weren’t there beyond that escapade.

There’s so much smoke filling up the Corona theatre, that you would need a lighthouse to guide you to the bar.  Amidst the fog, the security crew had their work cut out for them as wave after wave of crowd surfer came crashing over the barrier. Seemingly, the energy from the band was being matched by the audience and the ambiance in the building is electric, to say the least.

Just three songs in and frontman Joel O’Keeffe has already thrown six pints of beer at the audience, one of those after he climbed a light rig up to the veranda balcony when he smashed a tinnie on his for forehead until it sprayed everyone down below, then proceeded to shred on his guitar for a while before climbing back down to the stage. Not to generalize, but I am willing to believe that all Australians are, in fact, completely mad.

It has been quite a while since Airbourne last strolled into town, something O’Keeffe took time to poke fun at. “We released an album five years ago or something then some bloke ate bat soup and the whole world went to shit,” he said.

Without question, The Native Howl had been energetic, but Airbourne bring a relentless onslaught that is non-stop. O’Keeffe is beyond impressive with his beer slinging skills. So much so, that perhaps an NFL team should look into bring him as a quarterback. Cups of beer are being launched all the way up onto the balcony without a drop being spilled. In the front row, there is a young mad with special needs loosing his shit for the entire set, and on three occasions, O’Keeffe slings him a perfect beer pass, which the youth slams back to the rowdy applause of the crowd. Gotta love it!

Then a road case is rolled out on stage by a roadie, with the Motorhead logo painted on the side. On top, a 40 ounce bottle of Jack Daniel’s, four plastic cups and for cans of Coca-Cola. O’Keeffe then cracks the seal on the Jack Daniels, and pours four equal amounts, emptying the full bottle before adding in the coke and distributing the cups to his band mates. “We wrote this song for Lemmy Kilmister because he took us out on so many fucking yours and without him we wouldn’t fucking be here” said O’Keeffe. The crowd begins to chant “Lemmy! Lemmy! Lemmy!” as the musicians knock back their highly potent drinks.

The between song stage banter from O’Keeffe is a lot of fun, too. “Has anybody seen Cobra Kai… yeah, a little karate for ya! They’ve played three of our songs now, we might as well their fucking house band,” said O’Keeffe. The crowd at the Corona are eating it all up, the whole package, and are having a great time. Those seated on the balcony and thrashing about in their seats while those on the floor are jumping about, moshing and crowd surfing. This is rock n’ roll in it’s rawest form and the way things used to be and should be today.

The glory days of rock n’ roll might be long gone, but there are still artists and audiences that aren’t willing to surrender the genre just yet – it is a lifestyle, and when a band like Airbourne crash through town, reminding people of what we’ve lost, it makes those of us that still love rock to hold on just a little tighter. Airbourne are what this world needs.