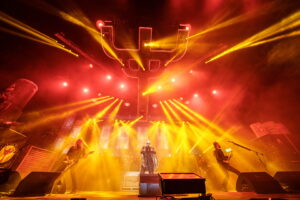 Yeah, sometimes the gods smile upon you and other times, the metal God Rob Halford himself denies our media access. It’s just the way the winds blow, but why should that mean I deny myself the pleasures of sound? So, I did the unthinkable and purchased concert tickets to tonight’s Judas Priest show. After all, Halford is 70 years old and who knows when he may decide that enough is enough? Hopefully never, like Lemmy, but one never knows.

Now, I’ve seen practically everybody imaginable in my time – but I’ve always found ways to miss Priest when they came to town. Twice, I was even in Montreal when they were, but not this time. No, on this night, I would share the same room as the mighty Judas fucking Priest! This being there 50th anniversary tour – a half-century of heavy metal, is an accomplishment that a very, very select few with ever achieve.

The metro ride out to Laval is a long, dull and tedious ride, especially during rush hour in a bustling city as vibrant as this one is, even on a Monday evening. With Place Bell now in view, and my buddy Tom hell bent on recreating 1986’s Heavy Metal Parking Lot all by himself, from the trunk of his own car, the night was off to a solid start. Heavy metal aficionados of all size, shape, age, sex and creed emerged from all directions, culminating at what would be our temple on this eve. Now, it was setting in; that pre-show burst of energy that shivers down the spine the way a hit of ecstasy does, as we eagerly awaited the shows first notes.

Shortly, finally, I would add the name Rob Halford to the long list of legendary heavy metal royalty that I have been so lucky to have seen live over the years. Something I should have rectified long ago, but as they say; better late than never. 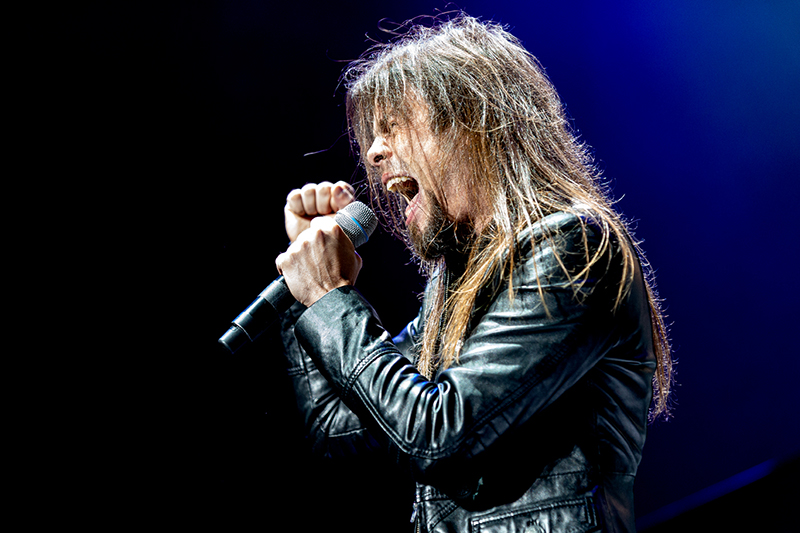 We reached our seats in haste, early and left to sit and await the arrival of Queensryche, who haven’t ventured to this part of the world since they opened for the Scorpions at the Bell Center in 2015 – and haven’t played a headlining role here since back in 2006. I suppose they would rather play opener at a packed arena then top dog at a smaller, albeit nice venues such as the MTelus – or Metropolis as it was known last time they rocked its sound system. I see the logic in that. Given that no other artist was part of this package, it still allowed for them to rock out to twelve of their best selections.

Pulling from a career catalog of fifteen albums to date over an impressive career now into it’s fifth decade, must create quiet the headache when it come time to narrow down a setlist. Opening with Queen Of The Ryche, as stragglers made they way to their seats, some carrying food and beverages, all ready to be warmed up for a night of hard rocking bliss. I imagine, for many in the cold bucket seats of Place Bell, this would more than likely have been their first taste of live music since at least before the global pandemic, that stripped us of the arts. Something that probably played into the hands of the ‘Rych, in a town notorious for its late arrivals to gigs.

The majority of Queensryche’s set would be comprised of tunes released in 1988 or prior, with all but two songs coming from their first three albums. Normally, when a band tours, they play material from their most recent recordings, but that wasn’t the case here. The most modern number played, was their opening piece – Queen Of Ryche, from 2013. With but one original member in the band, guitarist Michael Wilton, some might ponder who accurate the music played in modern times is, and the answer is simple – yes. Todd La Torre has done well replacing original vocalist Geoff Tate, and has done for a decade now. Replacing a vocalist is never an easy task, so what La Torre has been able to do is admirable – and here in Laval, he and Queensryche have put on quite the show. 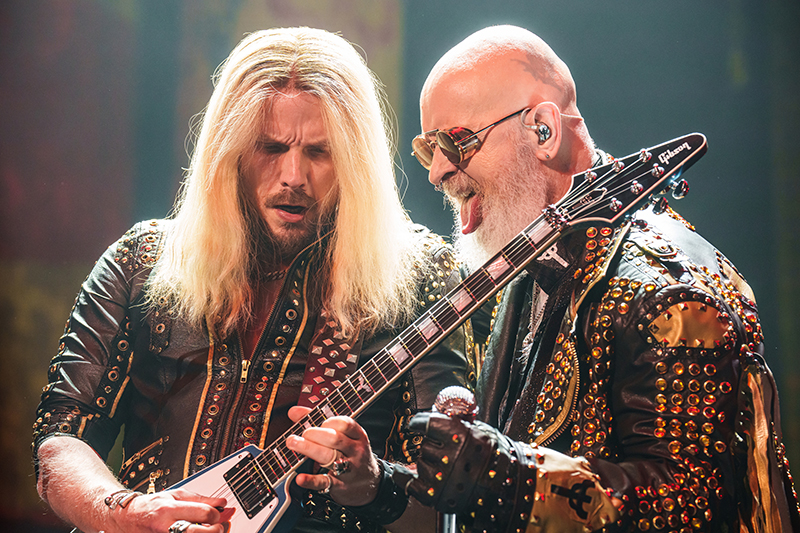 Following a wonderful set from Queensryche, I began to feel excited as I realized I’d finally be seeing the mighty Judas Priest in just a few short minutes. Rob Halford is the last of the true greats of the heavy metal realm; one that I have yet to witness live and in the flesh. Yet, I wondered if at 70 years of age, would he still control the vocal range and power that he has throughout his fifty years with Priest and during his solo journeys. Fifty years – it’s unfathomable.

For whatever reason, the lights dimmed and Black Sabbath’s War Pigs began to play. Odd. Then, came One Shot At Glory . It took but moment for Halford to ease my doubts and for my faith in him to be reborn. Still, there was a few lingering concerns, especially when it came to some of the more challenging vocal ranges that songs I could only assume would pop up later on, as the set went moved forward.

Sandwiched between Lighting Strike and Freewheel Burning, was the first of a slew of truly iconic rock songs. One that listeners from all aspects of music recognize perhaps without even realizing it as a Judas Priest jam. This was the moment my doubts fully dissolved, as Halford pulled out a thunderous version of You’ve Got Another Thing Coming. The man still has it.

Then came a blistering and scathing rendition of Turbo Lover, a personal favorite, that was followed up by a powerful barrage that included Hell Patrol, A Touch Of Evil and The Sentinel, compete with the lightning slick guitar work of Richie Faulkner, who shredded his fingers to the bone. Tight on every note, Judas Priest are a sight and sound to behold. Faulkner was almost to be the sole guitarist on this tour, however, as Andy Sneap was almost left off the tour, but this did not sit well with Priest fans the world offer and the backlash forced them to reconsider, bringing Sneap back into the picture – which was the correct decision.

Some of the more popular tracks, like Turbo Lover and You’ve Got Another Thing Coming, are fairly obvious bets as they represent some of the better known moments in their career, but what I wasn’t expecting, was to hear tracks such as Rocka Rolla – and the way my body began to slam about in seat, involuntarily expressing my absolute pleasure to what was happening on stage, proved that point.

Yet the beat was still yet to come. Any doubt I wrongfully had about a man of Halford’s age being able to lay down vocals was quenched the moment Painkiller began. Holy balls the man still has it, every bit of it, and is as potent today as he ever had been. I shocked my head in disbelief – hoe could this be? This couldn’t be real; only it was.

The show was only it wasn’t really, was it? At this point in time, we all know there was to be an encore. It’s just part of the package now. So began Electric Eye, and then Halford rode out on his motorcycle, as is tradition, revving the engine on the Harley Davidson before laying down a perfect rendition of Hell Bent For Leather.

A Priest gig would be incomplete without them playing Breaking The Law. It is their swan song and quite possible the piece they are most known for – and if not, then the final song of the night truly must be. With a giant bull now standing proudly on stage, with glowing red eyes and a menacing posture, Judas Priest finished off a ridiculously awe inspiring night with a killer romp of Living After Midnight. My jaw again left agape to scrap the sticky floor of Place Bell.

Fittingly albeit strangely, Queen’s We Are The Champions played over the PA as the satisfied Priest legions made their exit from the arena. Judas Priest weren’t good on this night – they had been fucking amazing and if I believed in such a thing, I would pray to have another chance to witness them live in my lifetime. Shame on me for having waited this long to have done so.