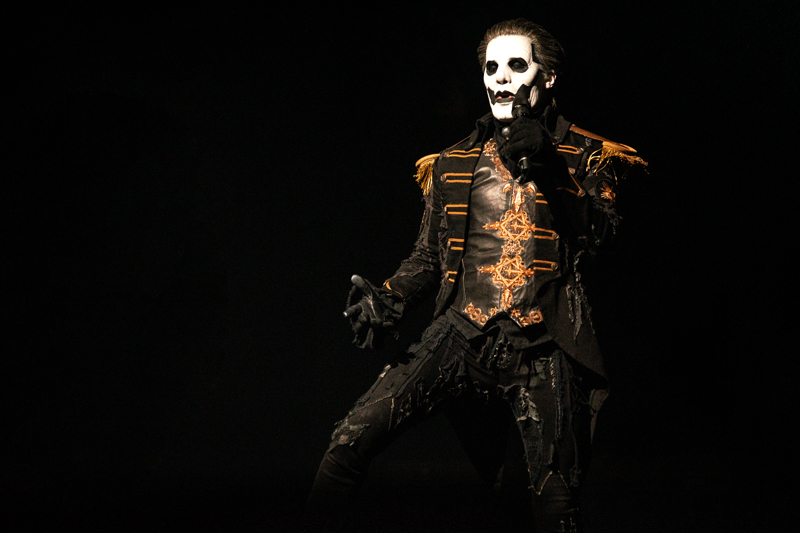 Following their show the previous night in Quebec City, Ghost made their triumphant return to Laval, which is situated just outside Montreal, and their first in and indoor venue since their last visit to Place Bell back on December 7th, 2018. Of course, Ghost headlined the final day of the 2019 Heavy Montreal festival as well. Currently making them the last band to have played the festival, as it has been on hiatus ever since.

With metal titans Mastodon in tow, touring for their incredible current album, Hushed And Grim, and for the second time playing in Laval this year – having swung by with Opeth back in late April. Opening up the show, was Spiritbox – a metalcore band from Canada’s west coast. All the ingredients for a fantastic night were locked in and ready to go.

Taking place on a Friday night meant most people in attendance were coming off a work week and ready to let loose – and that they surely did. Montreal and the surrounding area have a long standing love affair with Ghost – a the band seemingly are equally enamored with us, too.

I imagine it must have been great for Canada’s Spiritbox to play on Canadian soil – at the opposite end of their country. Hailing from British Columbia, Spiritbox bring a pop-meets-metal approach to their stylings and play a vibrant live set. Vocalist Courtney LaPlante is highly energetic and busy on stage, walking back and forth from the front and back on the stage, making sure she gets in her daily step count quota. LaPlante switches between deep guttural growls to a radio friendly lull effortlessly.

Sadly, I was only able to catch the last few tracks of their set as the shitty metro system decided to take a nap along the way. Not unusual, and something I had actually planned for but seemingly I hadn’t given the transit enough leeway with which to fuck me over with. Still, it wasn’t as bad as it was early this week, when the metro stations flooded while I attempted to go see In Flames. And why? A burst pipe, you say! nay nay! Rain.

Returning to Laval’s Place Bell for the second time this year, following their visit on April 21st with Opeth – and for some reason, playing an identical set as their last visit. Well, no, almost identical – as this time around, their set was cropped of the final two tracks – Gigantium and Blood And Thunder, for what I assume were time restriction reasons. I guess they went from one tour to the next with insufficient time to switch things up, which seems weird given that Laval probably wasn’t the only date that both tours had in common.

The stage set-up too remained unchanged, with Mastodon playing in the dark, back-lit by video screens playing the same mundane swirly images as was the case on the Opeth tour. But worst still, was the terrible sound. And when I say terrible, that is not an exaggeration by any means. When you’re a Mastodon fan but can’t wait for the set to finish because the sound is akin to fingernails being pulled along a chalkboard. That’s bad. If you’ve ever heard a cheap ghetto blaster being played at full blast, and know what speakers sound like when pushed beyond their means, then you have an idea of what Mastodon sounded like. I couldn’t bare it – so I went to check out the merchandise on sale, missing the final ten or so minutes of their set.

Any concerns that I had about Ghost’s sound sucking like Mastodon’s had were rapidly laid to rest. As soon as the curtain came up, to reveal the elaborate backdrop, and the opening notes to Kaisarion hit the airwaves, it was evident that the sound issues had been from Mastodon’s end, and not the Place Bell itself. For the remainder of the night the sound was crystal clear and precise, which makes Mastodon’s sound issues even more confusing.

Flowing straight into Rats and then Faith, it was obvious that Ghost were primed and on point, and this was to be a special night as is often the case when Ghost come to town.

“It has been some time since we last saw each other. Sorry about that. I hope that you have been doing fine. Are you doing well? It’s very nice to be back, I can tell you that.” Papa Emeritus then went onto announce a new record – or did he?  “Now, we have a new record coming out in March”, he said, before playing Spillways off of their newest record. Was this perhaps a mistake? Is there a new Ghost record on the horizon or was this a slip of the tongue, seeing as Impera was released in March of this year. I’m leaning towards it being an error.

Along with Spillways, Ghost played four other tracks off of the new Impera album, as well as several of their more popular numbers like the aforementioned Rats, Cirice, Ritual, Year Zero, Dance Macabre and Mummy Dust – which sent the fans on the floor into a frenzy as they scrambled to grab the Papa dollar bills that were shot out of the confetti cannon during the song. With the fog still very present, and the shimmer and shine that came off the golden pieces of confetti as it rained down was surreal – if there is one thing that Ghost does to perfection; it surely is the theatrical element of their shows. Truth told, there’s little Ghost don’t excel at.

Papa Emeritus tried to tell a joke between songs, but a Nameless Ghoul came along and usurped his spotlight, stepping in front of him and beginning his guitar part leaving Papa Emeritus shrugging his shoulders. What can you do. The worst part is that we never did get to hear what was on Papa Emeritus’ mind – the thought was lost to time. This was the first time in the many seeing Ghost that I have witnessed some sort of fuck up. At least it was comical.

There were so many special moments on this night, but perhaps the best was the appearance of Papa Nihil who needed electric shocking from an orderly to be revived for his saxophone solo. The zombified Papa of course turns violent and tries to choke out the orderly, which brought about a great round of laughs from the crowd. Being a bilingual city, the more slapstick approach to comedy is more likely to get attention seeing as everyone, no matter their native tongue can get in on the joke – and those at Place Bell certainly caught on. Sort of how Mr. Bean works anywhere in the world.

Ending off the night with Square Hammer, but not before Papa Emeritus found a charismatic and charming way to tell the crowd to fornicate with their partners less they go fuck themselves, and I could honestly tell you I have never before heard such elegance when being told to go home and beat my meat. I don’t understand people that dislike this band, because anyone that has seen them live has left happy, content and horny. Ghost gave the faithful attendees at the Place Bell there monies worth – including their Papa bucks that were mixed in with the mummy dust confetti.

Her majesty Queen Elizabeth II passed away last week, and there is speculation that the face on Canadian paper (it’s fucking plastic) money will be changed – and some don’t want to see King Charles III on it. Well, alright, what about Papa Emeritus? Works for me.

As has been the case for each and every time I have seen Ghost perform live – I had a great night. Working in music media, I am privileged to see a hell of a lot of live concerts, or gigs, or whatever the fuck you want to call them. Some are great, others are bland but Ghost is always an assured great time. I don’t say that about very many artists.

On a somewhat unrelated note – what the fuck is up with Laval charging $5.25 to get on the metro system? Talk about price gouging. All this talk about reducing traffic, and taking cars off the road – and then Laval sees fit to charge an arm and a leg to use its public transportation system. Disgusting. For reference, Montreal’s metro system (which uses the same trains and lines as Laval does) costs $3.50 for the exact same service. Not only is Place Bell a journey to get to, now music fans are getting flat out ripped off by the STL (Société de transport de Laval). Not cool.