If this is truly to be the last journey for Denmark’s Artillery, then they will have left on their terms and in blistering fashion. Although official word has not been given, the title of this extended play is perhaps a hint. Or I’m just full of shit, over tired, and reading too much between the lines…. again. (I’m pulling your legs, suckers, Artillery lives on!) 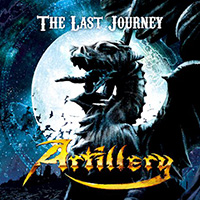 Artillery have been around since 1982, and have long been associated with Mercyful Fate and Metallica – possibly through a connection to Danish drummer Lars Ulrich of Metallica. The three bands have shared rehearsal spaces – where the finishing touches to this release were put in place, actually. One of Morten Stützer’s proudest moments, was having Metallica’s Cliff Burton jamming on his bass for several hours. Stützer began as the groups bassist before switching to guitar duties once Jørgen Sandau left the band in 1989.

Stützer unfortunately passed away in October of last year, due to a massive blood clot in his cerebellum. He was 57 years old. “The Last Journey” was written as a tribute to him, and features former vocalists Flemming Rønsdorf and Søren Adamsen, who returned to pay tribute to Stützer.

The Last Journey starts off with a nice picked guitar riff and some emotional lyrics about loss and pain. Then lunges into a great thrashing riff and back to the softer riff. At this point, the vocalists switch it up. Back to the other riff and on we go. It grows heavier for a moment and ultimately reverts eventually. Lyrically, the love for Stützer is huge and obvious. Again, this is a fantastic tribute.

The fact that it features multiple vocalists from the groups storied history together is nice. It feels right. A touching farewell and perhaps even gives a feeling that life is too short for any form of grudges or hurt feelings. Not that I am hinting at that being the case, I simply do not know if ever there was any animosity here. I’m more spit-balling on the thoughts I had while listening to this track, and watching the world burn to the ground around me.

The second track, or B-side if you want to get technical, is a cover of Metallica’s “Trapped Under Ice”, off of their Ride The Lightning album. This track was chosen as a further tribute to Stützer, as it was one of, if not his favorite song. Artillery have really gone all-out to create a lasting and beautiful homage and last testimony to a man that has obviously touched all of their lives tremendously. We should all be so lucky as to be paid such tribute when our turn comes to shuffle off this mortal coil. It truly is a touching farewell.

Artillery’s rendition of the Metallica classic is brilliantly executed and keeps closely in tone with the original. It strays very little in fact, and is an interesting take on a song that every metalhead the globe over knows. Knowing the back story, how the boys in Artillery are playing this because of the connect Stützer had to it, makes it special. It’s hard not to feel a sense of pride and mourning too.

Also, the title of this release is more a farewell to a fallen friend and band mate than it is a swansong. Should this have been the final chapter however, it would have been an honorable way to leave off a storied career. There is more to come from these great Danes. Artillery will enter the studio on October 5th to start recording their upcoming tenth album.

Pre-orders can be made on the Metal Blade records website, or by following this handy little link. The 7″ EP will be available in three limited print runs. 300 copies on black, 200 on blue and just 100 on yellow. Act now.  Stay tuned for more.