Few would have thought, that the return of the mighty thrash metal outfit, Vio-Lence, would be done with the a cover version of one the most iconic punk tunes of all times, yet here we are. Surprise! 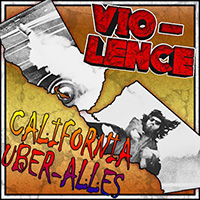 Now, it’s no secret that personally, I’m not too big on cover songs or remakes in general, in film or in music. Yet, sometimes I can appreciate a fresh take on a rotten vegetable. Seldom, if ever, will you hear me ramble on about a cover usurping the creators – because it simply is rarely the case. This is also not the case, to be blunt. However, hearing Vio-Lence tackle the Dead Kennedy’s classic California Über Alles is defiantly intriguing. Enough to peek my interest and raise my eyebrow.

The fact that the first new recording we’ve heard from Vio-Lence in twenty six years is a cover song, makes me chuckle. It is obviously a predecessor to what is to come, yet it still seems amusing to have done business this way. It has defiantly caught people’s attention though, and at the end of the day, isn’t that exactly what the purpose of this digital single was intended to do? Vio-Lence have announce their return in a big way.

The song itself is a ferocious beatdown, akin to that which the boys were known for. A good sign. Beginning with rhythmic drumming, that iconic bass line, then the more Vio-Lence tinged guitars and vocal deliveries. Somehow, without straying too far from the original, Vio-Lence have incorporated this legendary track into their own arsenal of audible weaponry. I mentioned earlier that I don’t dig cover songs, but this is one of the exceptions to that rule. Due largely to the fact that I’m just glad to have new music from these Bay Area legends. True. But credit where credit is due, they’ve done a great job here, and it needs saying.

“Being musicians in the Bay Area Thrash Metal scene, Vio-Lence believes it is important to acknowledge the music that had a huge influence on thrash metal – which was Bay Area punk rock”, stats the bands press release. Adding ” With that in mind, Vio-Lence looked to one of the most influential bands of that scene – the Dead Kennedy’s – and their iconic song ‘California Über Alles’ to perform. ‘California Über Alles’ is a song Vio-Lence has been wanting to perform live for some time.”

“We decided that since we weren’t going to be able to do that this year, and since fans haven’t heard any recordings from Vio-Lence since 1994, that now was a good time to bring it to our fans. We recorded it in our rehearsal studio with our new line-up of Phil Demmel, Perry Strickland, Christian Olde Wolbers, Bobby Gustafson, and Sean Killian. So we hooked up the recording equipment and got to work.”

“On a good day, it was about 95 degrees Fahrenheit, which was a motivator to nail our takes to minimize the time we had to sweat. Once the song was recorded, Christian headed home to Venice and got to work mixing and mastering the recording. We all agree that he did a great job, giving the song excellent sound without losing the raw rehearsal studio sound that we wanted to keep.”

The Bay area thrashers originally formed in 1985, and released three full-length studio albums between 1988 and 1993, where they disbanded. They returned briefly in 2003 for a bucket-load of live performances and released an album composed of demo tracks. Seemingly to signal that there was life yet in the band. Yet, they then when on hiatus again until earlier this year, where they again to play live. Although, much of that was cut short due the outbreak of the COVID-19 pandemic that has taken the globe by storm. Now that we’re again facing a resurgence in COVID-19 cases, who knows when these merchants of violence will again find their way up on stage.

What does appear to be set in stone, however, is that a new Vio-Lence album will be unleashed, through Metal Blade records, at some point in 2021. Now I don’t know about you, but my nipples are hardening as I type this at the thought of new material from these lads. Vio-Lence are preparing to cover as much global ground as possible. Be ready, violence is coming…

To accompany the new digital single, Vio-Lence enlisted producer Scott Kirkeeng to film a video clip to round out the process. And yes, of course we have it for you – it’s right below this line of text. Scroll on!

There you have it. It would be cool to see this released as a 7″ single. Perhaps when the band can tour again, with a new track from the upcoming record on the b-side; or vice versa. Or better yet, make it a split and get the Dead Kennedy’s or Jello Biafra And The Guantanamo School Of Medicine to record a Vio-Lence cover. This probably alludes to my addiction to physical media. I still love to buy vinyl and compact discs and horde them in my living room.