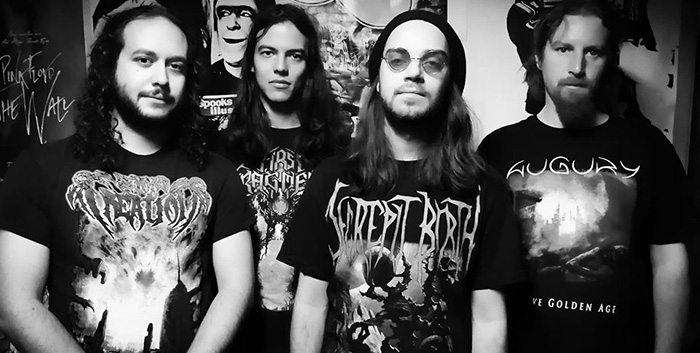 London, Ontario’s Skyless Aeons are on the verge of releasing their new record, Drain The Sun, via CDN records. As such, we spoke to vocalist Nathan Ferreira.

Compared to their initial release, the new offering maintains the chunky melodic death metal riffing and occasional black metal flourishes of the previous, but also has much more detailed and structured songwriting, much tighter musicianship and higher-quality production values.

The anti-natalist single, “Go Forth and Multiply” is a short, sweet punch to the gut that came together in a fit of inspiration. It speaks of humanity’s relentless desire to multiply and overpopulate, creating a world full of defective minds that never wanted to be born, with nothing better to do than populate the earth further. The song shows up, hits hard, and leaves, and it’s the best sneak preview for some of the musical and lyrical themes that are explored in greater depth on the album.

You have a new release coming out, tell us about it and why people should give it a listen?

We are releasing our first full-length album, titled “Drain The Sun”, a metaphor we use to describe the uncontrollable and faulty urges of humanity. It’s much more cohesive and focused than our earlier music, our atmosphere is more fully developed, and we’ve got a unique yet listenable sound that could only come from four extreme metal nerds slowly feeding off each other’s ideas for five years. This is our mission statement to the world, so we went all out.

How was the writing process for these new songs and what was your mindset going into this recording session?

The writing process for “Drain The Sun” was very gradual and deliberate, taking over two years. The way we write our songs is very organic and collaborative –  it starts with Nick (our guitarist) bringing a riff to the practice space, he’ll play the riff a few times, our drummer makes a quick skeleton of a beat, and then the rest of us will join in and we all slowly add our own frills and garnishes over several weeks, sometimes months.

On top of that, we wanted to make sure that this could be listened to as a full album start to finish, with all the peaks and valleys. That means that some parts of songs would be rewritten or just cut out entirely if we felt they wandered too far away from the sound and identity we were trying to establish. That delays the writing process. Sometimes that’s unfortunately how our ears work – we’ll like an idea one week and think it sounds awful three weeks later.

Do you do anything special when writing new music? Any specific routines or traditions?

Nothing special beyond our weekly practice routines. We’re all metal fans and record collectors, so before we start we’ll usually talk about new music we’ve checked out, swap albums, to get in the headspace for jamming. To warm-up, we always do about 5 minutes of a completely made-up-on-the-spot song, which we always record. Many of our riff ideas for new songs have actually come about with that method. Beyond that, good old fashioned booze n’ weed gets you in the headspace just fine.

How did you choose the studio and engineer(s) for these new tracks and what sound were you looking to capture? Walk us through the studio process!

We chose Mike Marucci (Sonic Zen studios) to handle most of the heavy lifting for our album, with Eric Altomonte as an assistant engineer. We knew of Mike because he had produced some fantastic sounding local metal albums (Yeti on Horseback’s The Great Dying and Vow of Thorns’ Farewell to the Sun), and Eric had done sound for a few of our live shows, so we wanted him to be involved in the recording of our album – and what luck, the two guys happened to know each other! The recording process was a very meticulous, layer-by-layer process – that’s how Marucci rolls. We spent months on each individual instrument making sure everything was absolutely precise, playing with different tones and effects, listening to the edit of a mix for two weeks, making notes, listening to the edit of the edit, and making notes on that… our perfectionist side definitely got the better of us, but we’re very happy with how everything turned out.

We also had  our album mastered at Visceral Sound recordings by Nathan Boots. He has all the technical know-how, and a fully loaded studio in his basement, and I play in another band with him (Hell is Other People) so it was the obvious decision.

Who would enjoy your new music and where can it be heard?

Our music would appeal to any metal fans looking for something that’s a bit different than what you’d normally expect, but doesn’t skip on the riffs. Other than that, anyone who likes extreme, weird, dark shit would be doing themselves a disservice by not checking us out.

Drain The Sun comes out on October 2, 2020. You can listen to our single “Go Forth And Multiply” and pre-order the whole album here!