Denmark’s Baest transform themselves into an algorithmically-perfect old-school death metal band for their new EP, Justitia. 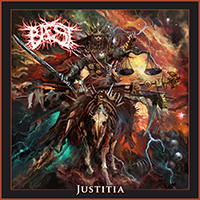 Have you ever asked yourself what old-school death metal might sound like had it been coded into existence by the world’s best programmer (Jon Skeet) on the world’s best computer (Fugaku supercomputer)? The best, and worst, answer I can come up with is: Baest.

I don’t want to start this review of Baest’s new EP, Justitia, by ripping them a new one. I want to love them. I really do. I get close. Very close. In fact, the epiphany is there… within arms reach… yet always just far enough away to be incredibly frustrating. I mean, the band is obviously talented, with each successive release bordering on algorithmic perfection. Yet, to these ears, there is an imperfection to that perfection. Now, to be clear, this isn’t the same imperfection that make early Entombed releases perfect examples of imperfection. You see, to be perfect requires a mastery of the imperfect. Old-school death metal bands nailed that imperfect perfection. To be fair, it could be argued that classic old-school death metal bands/albums have time on their side, with their imperfection only becoming perfect by way of nostalgia. But I digress.

Justitia starts things off on the right foot. The first half of the title track captures the mood and cadence of Blessed Are the Sick-era Morbid Angel in remarkable fashion. In fact, I think this is the sound Baest were born to mimic. One listen leaves no doubts about that. You could plop the first half of Justitia on Blessed Are The Sick and it would not be out of place. The second half of the song? Meh. It quickly becomes lost in a particularly awkward identity crisis, which seems to be a recurring theme on this EP.

Then, out of nowhere, the band channels  Blackwater Park era Opeth (the heavier parts of said album). Like, when I say ‘channel‘ I mean that these guys literally morph into 2001-era Opeth, particularly frontman Simon Olsen, who becomes a doppelganger of Akerfeldt at his most brutal and best. I dunno, but that opening riff flirts with plagiarism to a degree I haven’t heard in some time. No matter, it is fantastic, and a sad reminder of just how good Opeth once was.

With six tracks total, Justitia hits a few buttons that puts them in league with some of the big boys mentioned above. Yeah, it’s nothing new, and apart from the first two tracks, the rest of the album is a mid-paced slog-fest with no real purpose or reason of its own. As mentioned at the top of this review, Justitia (and all Baest albums, to be perfectly honest) is missing the perfect imperfections that truly are the mark of a great album. Maybe with time Baest will be regarded in the same way. As it stands now, I’d love to see less algorithmic perfection in the structuring and production of Baest’s recorded output. It’s okay to be imperfect, guys. In fact, it will very likely make you perfect.

Copies of Baest’s new EP, Justitia, can be found over on the Century Media website.