The mighty world-eaters, Gwar, return with a new slab of blood and guts, known as The New Dark Ages. 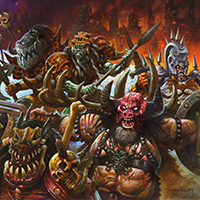 Sometimes, an artist can transcend its genre and create a body of art that transcends borders and restraints of fitting a category. The best ones, can do this without compromising their vision. Gwar was able to do exactly that, while dressed as rapist space aliens who mutilate and kill people on stage for fun, albeit nearly always the shitiest members of society. Politicians and fallen stars. Scum and villains. You didn’t have to be into metal or punk to know who Gwar are – they were bigger than that. Crazier than that. The thing that should not be but so righteously was. And is.

Oh, there’s a comic book or graphic novel, if you wish precision, that will release around the same time and tie into these fifteen slabs of lunacy.

This album tells the story of a timeless evil emerged from Gwar’s distant past to threaten mankind’s pathetic attempts at evolution, twisting and perverting the modern world and using technology to polarize mankind to the point that reality itself has split into two distinct universes, a…Duoverse, if you will (or even if you won’t)!

The New Dark Ages chronicles Gwar’s adventures in the Duoverse, where the band rediscovers old powers such as Blothar The Berserker’s terrifying berserker mode, and encounter new allies, such as the murderous maven known as The Cutter. Along the way, they battle the living monuments of a lost cause and armies of undead soldiers who Rise Again to fight a New Civil War. The New Dark Ages is a journey through the archetypes of the human imagination, as our anti-heroes live again horrific fairy tales such as that of the old Ratcatcher, the Pied Piper, reminding us that the spirit of Gwar is as old as storytelling itself.

I really wanted to come into this without comparing it to the Oderus Urungus era of this legendary band. Alas, I couldn’t. Perhaps that is unfair to the remaining and new formation that collective make up Gwar, yet none the less, Oderus was too large. His phallus too big to replace. Blothar The Berserker is a solid frontman, with a great vocal range – at times, reminiscent of Tim Baker from Cirith Ungol. His only real flaw, is that he isn’t Oderus Urungus.

It has been five years already,  since The Blood of Gods came out, the first album without Oderus Urungus at the helm, and the first to feature the Blothar The Berserker. (Once known as Beefcake The Almighty). The New Dark Ages follows along the same lines as The Blood Of Gods. The post-Oderus era. How I hate to write those words.

Regardless, the legions of Gwar fanatics spewed across this toilet Earth will always come out in droves to see Gwar live. Their over-the-top live performances are a thing of legend and fables will still be spoken about their gigs long after the group finally (if they do) call it quits. And in time, this new incarnation of the group will what the next generation of bloodthirsty, childish humor aficionados seek out and adore.

There are some great moments of this new record – thrashing riffs. Gwar seem to have increased their musicianship with each album, having come a long way since the power chord fueled punk anthems found of their debut, Hell-O. The comedic values remain, although not the same as their were – I won’t say it’s worse, only that it isn’t what it once was.

The final word on The New Dark Ages is, if the Gwar moniker wasn’t attached; I would have enjoyed it more. It just isn’t a Gwar record. You know, sometimes, the truth fucking hurts. Oderus is gone. Gwar must go on. Therefore, it is on me to change and accept the things I cannot change. That, that’s the truth that hurts. In time, I may well feel very differently about this record. But not today.

Order your copy now or be condemned to the pits and fed to the worm; the world maggot. You don’t want that, do ya kids? No! See follow this link and hand over all your cash! Pronto.