Coming in at just under twenty minutes, this debut record from Germany’s Constant Vulse is a refreshing entry to the world of extreme music. 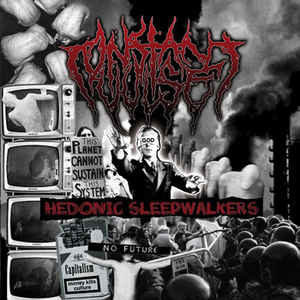 Stylistically, it succeeds in blending the technicality and ferocity of early death metal with the aggression of Grindcore and crust punk. At times technical and at others, rather simplistic. Always entertaining. One of the many aspects of this disc that I really like comes from that aforementioned simplicity. In a scene where more and more bands seem to think that the more notes played per minute equates to a more extreme product, Constant Vulse are able to see beyond that. Instead, they lean on the older mentality that relies more on the creation of catchy riff-work. I’ve always preferred that approach to music.

Several times I found myself reminded of classic Cannibal Corpse time signatures and really thought it melded into what they are doing on this album rather well. Some of the vocal patterns also hint towards the way Chris Barnes delivered his barks on “The Bleeding”. I really enjoy the elements of old school death metal that this album implores. It even hints at melody for a few short seconds on “Feeding The Scam”.

Having a George Carlin clip at the end of “Regressing Mass” further earns my thumbs up. It helps in solidifying the punk attitude that is hinted at several times throughout this record, using one of his most famous quotes to hammer home the group’s political viewpoint. “They don’t want a population of citizens capable of critical thinking. They don’t want well-informed, well-educated people capable of critical thinking; they’re not interested in that.”

With “Hedonic Sleepwalkers”, these young Germans have opened doors for themselves and will certainly gain attention as long as people are willing to lend them an ear. I am extremely interested to see where this band goes from here and most defiantly recommend this record.