Houston’s Escape From The Zoo, featuring current members of Days N’ Daze and We The Heathens, drop their new album, Countin’ Cards on Fat Wreck Chords. 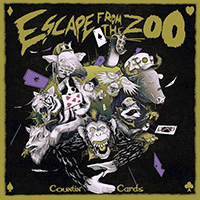 Sonically akin to Days N’ Daze, largely due to the fact that the main vocalist, guitarist and song-writer for the two groups is the one and only mister Jesse Sendejas. Escape From The Zoo is co-founded by Sendejas and his wife Veronica, and also features Elliot “Smelliot” Lozier of We The Heathens – as well as his seemingly less fragrant brother, Zach. Elliot handles the rhythm sections – drums and bass, while Zack plays horns.

Sometimes Escape From The Zoo sound a little on the pop punk side of things, yet at others, their crust influences seep through. Those more poppy leanings are intentional and stem from a chat Sendejas had with his father as a 14-year old, where the senior Sendejas mentioned how he liked to hear an upbeat riff or tempo when the lyrical content became rather bleak. Considering this record is largely about Sendejas getting sober and becoming a better person for himself and those around him, it does tend to wander into darker territory at times – realism, if you will. It is then a given, that this record quite often ventures into happy little segments, to off-set the more morose bits.

At times reminiscent of Streetlight Manifesto, if the aforementioned encompassed more gritty and dirty, for lack of a better word, vocal style as found on Escape From The Zoo records. More for the aforementioned upbeat, highly energetic passages. Still, there’s often the underlining reminder that this and Sendejas himself are rooted in Crust punk, DIY ethos and probably more likely to be found hoping trains than travelling about in the style a group like Streetlight Manifesto are probably accustomed to.

As a big picture, Escape From The Zoo have crafted an energetic collection of sounds with a positive outlook on life – with lyrics that touch the “lofty learning curve” of living, and the trials and tribulations needed to find ones way in such a place. Musically, mixing grittier vocals over happy-go-lucky riffs and horns is an interesting approach and probably is one of the more unique titles to be found on the Fat Wreck Chords roster. Call it Folk punk, or cow punk, thrashy bluegrass – whatever you like, just don’t dismiss it. Not surprisingly, Escape From The Zoo’s Countin’ Cards could just has easily been the follow up to Days N’ Daze 2020 ripper, Show Me The Blueprints, as both records follow the same …blueprints, and feature the song structures of Sendejas. If we’re honest with ourselves, we can admit that punk rock tends to lack much experimentation or new ideas, then, perhaps this is the injection the punk world needs.

The introduction to Wasted Years is nothing short of brilliant, taking aim at modern people; and a staunch dislike of cardigans. Can relate. Fiercely. Honest and emotionally fierce, the song speaks about years lost to drugs and the bottle, with a sense of regret (yet ironically we have to go though those things to reach who we become down the line). On Heads Up 7-Up, Escape From The Zoo take aim at the American dream, and the scam that it is. Killing yourself to live, by way of a nine-to-five routine. Again far too relatable for comfort.

Pre-orders are available through Fat Wreck Chords, although vinyl copies don’t ship out until June – you can thank Adele for that. In the meantime, downloadable versions of the record included with the purchase can be obtained right away. Or Compact Disc copies can be purchased too. Those are cool still.

For Fans Of: Days N Daze, Rail Yard Ghosts, We The Heathens