Leaders and never followers, the ground-shattering Voivod have returned with Synchro Anarchy, their fifteenth studio album. 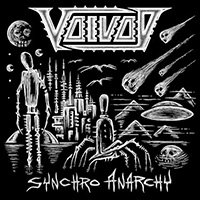 What more can be said about Voivod that hasn’t already been expressed a hundred thousand times already? In a single word, Voivod are pioneers. Forever pushing the envelope and forcing metal to grow with each riff and each note they’ve ever written and recorded. Easily one of the most influential extreme music artists of all time, Canada’s Voivod have been at the helm of progression since the early 80s. By now, every self-respecting – and self-deprecating, metalhead knows of Voivod. On par with the giants of the genre, and stull pushing boundaries more than

Following 2018’s highly praised and Juno Award winning The Wake album, Voivod find news ways to advance their own sound, composing the kaleidoscopic sonic monster that is Synchro Anarchy, reaffirming themselves as one of the most fervently creative bands on the planet. If not the universe. Until such times as alien life is confirmed, and their bands better those of Earth – I’ll stand by that statement. Yeah, that’s an intergalactic call-out. Prove me wrong!

Chock-full of off-kilter time signatures and other technical musical oddities, unexpected breakdowns and passages that are played with such technical ecstasy and precision, as has been the case with much of their lengthy discography to date, Synchro Anarchy slots in perfectly with their catalogue. Such dissonant chords, song structure that is far beyond comprehension and probably shouldn’t work – but does.

On title track, Synchro Anarchy, strange riffs pan back and forth from left to right, leading into a typically abnormal Voivodian passage and into a fantastic journey. Despite consisting of just two of the original four members, not-so-new comers to the foray Daniel “Chewy” Mongrain (Gorguts, Cryptopsy, Martyr) and Dominic “Rocky” Laroche are more than inept to create music in the Voivod vein. Anybody that saw the two live streams the band did late last year, would have heard the pair talking about how much the band they now play in meant to them growing up.

Hints at the former thrash days appear briefly on Holographic Thinking, which just so happens to be one of the better songs of the record. By the time Quest For Nothing reveals itself, Synchro Anarchy would have slowed down a tad, sinking into a soothing stoner rock vibe, which continues on the albums final track Memory Failure, which lightly treads into doom metal territory, while remaining very much a Voivod track.

“At first we went on tour for almost two years, pretty intensively, with great bands and line-ups,” recalls Chewy. “We went all over the globe, to Australia, Japan and Europe many times, and twice across North America. It was great! We had also a few surprising invitations, like playing the Montreal Jazz Fest. We also won a Juno award for ‘Metal/Hard Music Album’ of 2019. We came back home in late December 2019, and then everything stopped for obvious reasons.”

“It was a challenge, because we couldn’t jam together very much, but we all welcomed the circumstances as a new creative element,” says Chewy. “Lots of demos and files were shared and it was all worked to the point where it really sounded like the four of us playing in the same room. We could get together and try the ideas out just before the recording process to make all the small adjustments. In the end, it was almost like a race against the clock. It was pretty intense, but we welcomed the challenge!”

Four decades on, and Voivod are still as ground-breaking as ever, still leaders, never followers, and Synchro Anarchy is as poignant as anything the band has ever done in their storied career. Think about that for a second.

Copies of Synchro Anarchy can be obtained at reasonable cost from Century Media, on black or green vinyl, Compact Disc and digitally.

For Fans Of: Martyr, Flotsam And Jetsam, Obliveon