Californian melodic hardcore stalwarts Ignite are back, with a new self-titled album – and a new singer. 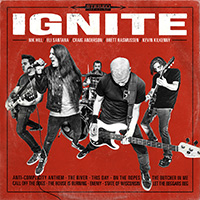 It’s always hard when a band switches singers, especially when the vocalist has been part of the group for the vast majority of the groups run. Even more so, when the singer is of the quality that now former Ignite frontman Zoli Teglas is. Joining Ignite shortly after their debut record in 1994, Teglas has appeared on no fewer than five full-length albums and numerous splits and extended plays, cementing himself as the voice of the group. Teglas also had short stints as a member of The Misfits and Pennywise, with whom he recorded the 2012 album, All Or Nothing.

However, that reign came to end shortly before the recording of this new record, and Ignite turned towards Holy Grail’s Eli Santana. Now, Ignite are a melodic hardcore band, while Holy Grail is a traditional heavy metal group – so when the announcement that Santana had been hired came about, my interests were immediately peeked. Santana is the guitarist for Holy Grail, known for swanky riffs and slick licks – but not for his singing.

Still, it would seem that the gambit was perhaps not as large as at first glance, as Santana has a great set of pipes and on Ignite, a solid fit. Once the band hits the road, it will be quite interesting to see how he handles the more well known tunes that Teglas put his stamp on some time ago. I get the, based on his performance on this record, feeling that he’ll handle the job quite well. Both men have a similar vocal sound, delivery and range.

Not surprisingly, the change of guard with the vocals is always going to be the big story – but there’s so much more to a band that just the voice. The rest of the group is the same that recorded A War Against You, which was released a little over six years ago. In that time, it is comforting to see the progression – while remaining true to their past, that Ignite has undertaken. On The River (which can be heard below) Ignite showcase their maturity as musicians, crafting a brilliant put together track that still has the feeling and structure fans will expect, but with an improved level of writing, honing their craft brilliantly.

On Call Off The Dogs, Ignite let rip with a heavy hitting slab of melody, unquestionably hardcore with a wicked breakdown smack dab in the middle of it all. With The House Is Burning, they show off their ability to craft melodious tunes, filled with hooks, emotional vocal passages and an anthemic chorus that at a live show, will undoubtedly grow to be a crowd favorite. On Let The Beggars Beg, Ignite step briefly into Rise Against territory, a slower romp that shows off that song writing maturity I allured to earlier. Finally, on After The Flood, Ignite on a high note – sparking a high octane yet ferociously ear-pleasing number that features some solid guitar work. This self-titled record is filled to the brim with fantastic riffs, stellar vocals and wonderfully slick drumming.

“On The Ropes feels like a modern version of an old school Ignite song,” says guitarist Nik Hill. “It has that melodic bass intro that is very familiar and then it jumps into a high energy hardcore song that gets me really pumped up when we play it! I can’t wait to play this one in a packed room” He isn’t wrong, either – On The Ropes certainly would fit into the groups back catalog. Great news for long-time fans of Ignite – this is truly is a strong continuation for the band, even though the man at the microphone isn’t the same.

“Eli was a surprise, no question,” says Brett Rasmussen. In fact, Ignite’s new vocalist is largely known as a guitarist in Los Angeles-based metal bands Holy Grail and Huntress. However, after culling through a number of potential frontmen, Santana proved himself the clear-cut choice. “He had the enthusiasm, the talent, the voice and the same sort of excitement for the band that we do,” says Rasmussen. “My first or second hardcore show ever was Ignite at The Showcase Theater in Corona,” says Santana. “Growing up in Southern California, bands like Suicidal Tendencies or Bad Religion were just as much an influence for me as Metallica. It’s what was in the water.”

Nobody is going to call Ignite’s output prolific, waiting six years to unleash this new collection, which came a cool decade after 2006’s critically acclaimed Our Darkest Days. Instead, like Teglas and his excursions with The Misfits and Pennywise, the rest of the lads have kept busy playing in other bands as well. Bassist Rasmussen spent time touring with Nations Afire, while Craig Anderson was playing drums in Strife and Brian Balchack was writing and recording guitar with Into Another.

Ignite’s self-titled record, is available for pre-order from Century Media right now – with a black vinyl version up for grabs, compact discs and digital copies as well. This is most defiantly worth the price of admission.