Montreal’s Hood Rats follow up their 2019 debut full-length, 40 oz. Of Fury with a four track EP. 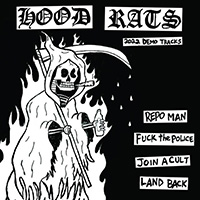 Time flies, and somehow, it has already been three years since the Hood Rats dropped their debut full-length, 40 oz. Of Fury – yet so much has happened in that time frame. Just one of the members from that first album remains, one mister Tony Salador, that has given up the drum throne to take back his spot at center stage, strap on guitar back on and properly give abuse to the microphone. On drums, Guillaume Tremblay, who always was a touring musician, alongside Salador, in The Blood when the UK Oi legends came across the pond, had border issues, and needed two musicians to step in and learn their songs in a matter of hours. Rounding out the threesome, is Andy McAdam, on the bass guitar.

These Hood Rats play pure, balls-out Rock n’ roll, with supreme grit, head-stomping attitude and social consciousness – protest songs, showing the ills of society while throwing up scorching hot solos and aggressive, break-neck riffs. Bass lines that are rightfully loud and present in the mix, and hard hitting beats on the drum set. Sort of like Nashville Pussy without the perversion. Like on 40 oz. Of Fury, these four new songs with all penned by Salador. All instruments and vocals.

First at bat, is Repo Man, which starts with a rattle of the snare drum before flowing right back into that Motorhead-esque that 40 oz. Of Fury was soaked in. A minute in, and the screaming guitar licks start flying off the handle – Salador can sure shred. Second track, classically named Fuck The Police – something we can all agree on, is a hard piece of proper Punk, well-played and furious. Join A Cult is a more straight up raw rock n’ roll track, that again features some guitar wizardry. And finally, Land Back, which hits home with a truth-bomb set of lyrics about how poorly North Americans have treated its Indigenous peoples for long as we have forcibly occupied their lands. Land Back – giving back to those we have wronged, and still wrong.

If there is a negative to this new recording, it is the production and mixing – yet, as the title states – these are demonstrational tracks. Salador’s vocals need to be higher in the mix, as they tend to get lost quite a bit throughout. Yet, if that is the only downside, it can’t be that bad, now can it? Let’s see where these new songs lead, which presumably is to a new record (no hot takes here!) and that is something worth looking forward to. Four songs in under eight minutes!

Check this shit out, kids – these four scorching tracks are available for just three bucks, over on the Hood Rats bandcamp page. That’s less than the cost of a tall can of shitty beer at your local depanneur (that’s Montreal talk for corner shop – can also be referred to as a dep. used as, “I’m going to the dep for another sixer and some smokes, need anything?”).