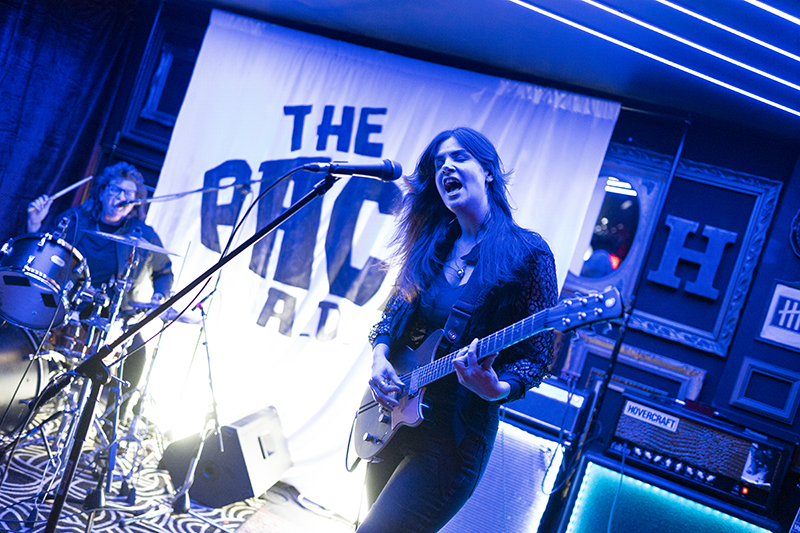 Sunday night in Montreal and the streets were buzzing with folks enjoying their freedom again. Normality to me is having too many shows to go to, and having to decide which to attend. On this evening the only place to be was on St Denis Street at the Turbo Haus. In the spotlight on this fine soiree was two of Vancouver’s all female bands, LGBTQA+ punk rock group Strange Breed and the garage rock duo The Pack AD. A last minute addition to the line-up, saw local rock act The Sick Things join the bill, as well.

Touching on social and political issues ,  Strange Breed are not exactly new to music, but here to evolve a more safe space in a not so inclusive outdated scene. Exploring topics through music such as as mental illness, gender discrimination, coming out/LGBTQ+ visibility. A  proud all queer band around since 2017, with their debut album released in 2019 with the help of  Creative B.C. and FACTOR funding.

Added to the bill at the very last minute was Montreal’s own The Sick Things. A four piece band with some local airplay, and a opening gig in 2016 for the legendary English punk band The Buzzcocks. A mix of talented musicians, friends that were previously from defunct Montreal bands, Barn Burner, Beat Cops, Trigger Effect and Prevenge. These guys were a great rock appetizer for the night ahead. 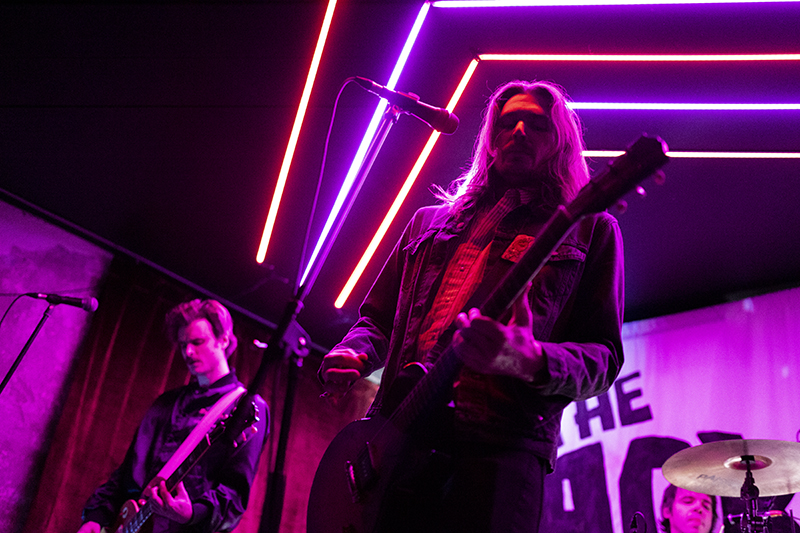 With the long pause in the pandemic of the arts and live music, you would think shows might start on time, but this is the music business and nothing ever starts or goes according to plan.

Running a tad late, like any true long haired rockers would, The Sick Things were finally ready to get this  train rolling. There was no doubt that they had some followers that were there just to support their friends. The members of the band were schmoosing in the audience, sipping beers and shooting the shit during the time they should have been rocking those same people, but as Montreal’s overall attitude to everything is fairly laid back, the audience were late arriving to which I imagine the response of the band was to wait for the one-hundred person capacity venue to fill up a little more before strapping on the guitars. Normally, this wouldn’t bother me – unless it happens to be a Sunday night, as this was. Whatever though. All would be excused the second The Sick Things began their wicked set.

There was a wall of pure rock sound that came from these for guys, from within a tiny indie venue. Heavy, nostalgic guitar sounds of the 70’s  with a clear Cheap Trick and Thin Lizzy influence. It was great to see people rocking out and smiling  (under their masks) of course. Precautions taken for patrons and bands at the Turbo Haus were understandably still strict. Mentioning that it was the first time they were the minority at a show, it didn’t seem to bother them to be opening for such strong female acts.

With only one full length album released in 2018, they played a good mix of old and a few new tunes. We can only hope that this is a warm-up for an eventual return to the studio. 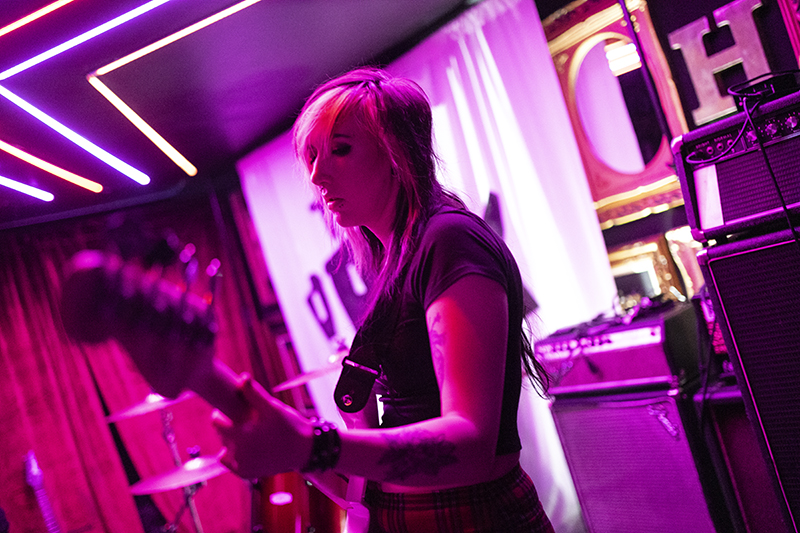 It was the ladies turn now to win the crowd over.  With a bit of nervous energy singer Nicolle Bell-Dupas explained why they felt the need to create a safer space at shows. With the ever changing climate of general intolerance still, it was necessity to address these concerns. Even in modern times, where people are more open and accepting towards others than at any other period of recorded human history, there still remain some people that would rather spread hate – something that Strange Breed unfortunately experienced on their last visit to Quebec.

Regardless, everyone that forms Strange Breed looked to be having a great night here in Montreal, and the crowd in turn mirrored that energy. It is always nice to see a group enjoying themselves while performing and that was definitely the case here. Strange Breed have a certain chemistry about them, one that spells friendship and more than mere artists working together for a common goal. Drummer Megan Bell-Dupas  and guitarist and vocalist Nicole Bell-Dupas are married, and perhaps that is where that bond begins.

The band started the set of with their first release since the launch of their debut full length, Permanence. Released as a digital single, Reputation takes on the issue of having your drink drugged, being taking advantage of, still an all too common scenario, sadly. This song deals with taking the power back and using that vulnerability to seek justice. Finding the inner strength to expose these individuals, so this never happens again.

All in all, Strange Breed delivered a heavy, yet pop punk fueled barrage of fun tunes, big smiles and positive energy. With the glowing pink and purples from the ceiling above them matching their aurora, this was a night where these girls really shone, and hopefully the enthusiastic audience that seemed to revel in their sound will help them forget the bullshit they were forced to endure in Quebec City on their last go-around.

Now into their fifth year together as a band, with one album under their belts, a second in the works and a pandemic that looks to hopefully be fucking off for good, I would expect we haven’t heard the last out of Strange Breed – not by a longshot. 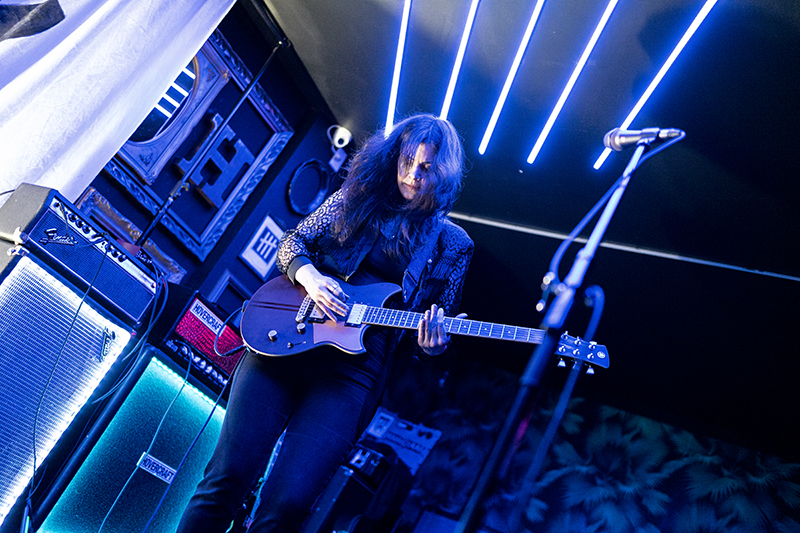 The final act of the night, was a duo that also hails from Vancouver, British Columbia – The Pack A.D. with their second to last gig of this coast to coast tour. Sixteen years and eight albums into their career, Maya Miller and Becky Black appear to be in full stride.

The sound omitted from The Pack A.D should have been coming out of Orange amplifiers, yet somehow, that wasn’t the case. Heavy on the fuzz and grunge that you’d expect from a Seattle band from the mid to late 90s, this duo was able to create a wall of sound despite being but two musicians. That in itself, is massively impressive. Black’s guitar playing was solid and spot on, even though she seemed to be having a bad time on stage. If she ever reads this – rest assured, you rocked the shit out of the Turbo Haus on this night. I just feel like that needs saying.

Playing selections from their entire catalog, The Pack A.D collectively brought a fun ambiance filled with Sabbath-esque levels of happy-go-lucky doom rock, combined with that warm feeling you get on a Queens Of The Stone Age or Kyuss album, topped off with the attitude found on an L7 or Bikini Kill record. I probably would have left the venue with one of their glow-in-the-dark vinyl albums had they not said it “sucked” right as I was making my way towards the merch counter.

“It’s cool looking and you could stick it in the spokes of a bike” said Black, before warning that it didn’t sound very good. Funny way to sell your merch. To be fair though, capturing their sound live is practically impossible. So much fuzz! Perhaps if people had Orange amplifiers of their own connected to their turntables, set to eleven, to properly annoy their neighbors – Maybe then, the sound found in the live setting could be properly reproduced.

Following their set, drummer Maya Miller greeted fans at the merch table, hawking tee shirts and records, while guitarist and vocalist Becky Black was down in the main bar, visibly displeased and vocally expressing her malcontent towards the sound engineer. Although from where we stood, the sound seemed pretty good and despite the odd lighting, looked fun as well, from the stage, it would appear to have been a whole other story. Black complained about not being able to hear herself or anything from her stage monitor, and felt that the duo were not as tight as they could have and should have been.

Outside, Black remained displeased, brushing off fans that attempted to speak to her. Hopefully next time The Pack A.D come to town, things will be different and Black will be leave whatever venue they play happy, and able to enjoy the rest of the night in this fantastic city.