The Mad Caddies are about to drop a new set of tunes, their first since the phenomenal Punk Rocksteady collection. 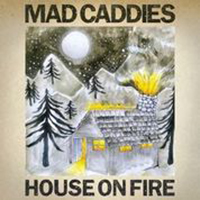 I’m still in awe of the aforementioned Punk Rocksteady album. It was a near perfect release, and as such, I went into House On Fire with very high hopes. The tracks contained in this new EP are original compositions as opposed to the re-imaginings contained on their previous opus. Let’s be just and not discredit them as mere covers. They’re so much more.

Those renditions contained upbeat, bass heavy Ska and Rocksteady styled imaginings of well known songs, that were almost unrecognizable. It was supremely well produced and those elements are all present on these five new songs. In fact the formula used on both records is fairly similar, which is a beautiful thing.

Let It Go quite literally picks up where the Caddies left off. Slowly it eases into musical sunshine, with a sweet bass line and soothing vocals that make you want to let all life’s worries fade away. If you closed your eyes, you’d be swept away to beaches, bikinis and pina coladas. Considering travel this year is stripped from us; baby, this is the next best thing.

On Waiting For The Real Thing, we get a dose of the hardships of living, in a happy song. The wind section shows up and ramps up the sounds. There’s even a wee taste of doowop in form of a backing choir behind the chorus. Finger snaps and all.

Dogs Of War drops tempo a little, and jams an acoustic guitar introduction before switching to the electrics and the wind section once again gets some air time. The trademark bass lines, soothing vocal arrangements and the usual well thought out lyrics work as a compliment as well as a counter argument to those found on Waiting For The Real Thing. Somebody hurt this man; but he isn’t letting none of it get him down. Instead be and his boys and bringing to sound systems across the world. After all, sound systems are always gonna pick us back up again!

Thankfully, the Mad Caddies show Punk Rocksteady was far from a fluke. House On Fire is a solid follow-up and worth the time of day. Grab your copy from the Fat Wreck Chords webstore and get out dancin’ shoes polished up. You’re going to need ’em!

For Fans Of : Reel Big Fish, The Slackers, The Planet Smashers