Spirit Adrift return with their third full-length album, and with a slight tweak to their sound. 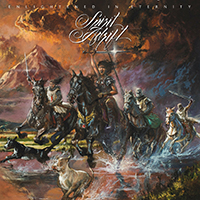 Fear not, though, for this slight change in direction works quite well. Although there are still moments that resemble their previous works, Enlightened In Eternity moves a tad more towards the NWOBHM sound. Toning down the doomier elements and building on the more traditional heavy metal sound. As I said though, it is a subtle nuance.

Like their two previous albums, Enlightened In Eternity relays heavily on big riffs and great melodies. The resurgence of the NWOBHM sound has me tickled pink, and there are a plethora of incredibly talented bands leading the charge. With Enlightened In Eternity, Spirit Adrift move into that category, alongside titans such as Haunt and Night Demon. These modern bands are far more talented than those that laid the cobblestones along the path, and the guitar work that is coming out today is unbelievable. Spirit Adrift included. Enlightened In Eternity is a grandiose journey down a long-trodden path, that still comes up smelling of wild flowers and spunky spirit.

Opening track Ride Into The Light is a ripping track that takes its listener on a cosmic journey through time. The guitar harmonies and vocal deliveries are wonderful. Hooks big enough to ensnare the biggest of fish and licks and riffs to sink the most grandiose of ships. Picture that scene in Jaws, where the big bertha of fish decides to come aboard for a snack. That’s what we’re looking at here people.

Astral Levitation continues that theme, and as far as I am concerned, is the best track on the record. It does as the song name suggests. Transcendence. There is a giant riff in this song. Followed by a howling solo, then another solo. As Fry from Futurama says “shut up and take my money!”. Despite my advanced copy; this was the moment I made my order for the new album; and my addictive personality traits also caused my fingers to hit the buy button of their previous two albums as well.

Cosmic Conquest offers up a heavy hitting extravaganza that lovers of the riff are going to shit themselves over. And the chorus, oh you’re going to be screaming this chorus right back at Nate Garrett when live shows finally return. I would wager some of my beer money on it. Win. Then drink up mine and your booze funds. Kicking in with a drum beat that just oozes power, then right into the fray. This one gets my fists pumping in the air.

Everything about this record is awesome. Its heavy but melodic, its well written, played balls out and full of energy. Even the album cover is ridiculously nice. Hopefully, when this pandemic thing finally recedes back to whatever hell it emulated from, and bands can once more tour and play for the beer-slurping masses, Spirit Adrift will light up a stage within driving distance of my old bones, so that I may witness their music as it should be – live and loud.

You too can have a copy by visiting 20 Buck Spin’s website. Do it. You won’t regret it.

01. Ride Into The Light
02. Astral Levitation
03. Cosmic Conquest
04. Screaming From Beyond
05. Harmony Of The Spheres
06. Battle High
07. Stronger Than Your Pain
08. Reunited In The Void