Mantar
Pain Is Forever And This Is The End
Metal Blade
Released: July 15, 2022

Germany’s Mantar have returned with a new record, Pain Is Forever and This Is the End, due our on Metal Blade Records on July 15th. 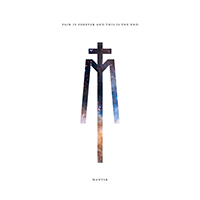 Throughout the record, Mantar attempt to implant ear worms – choruses that hook the ear and sonically eat their way into the cranium. They succeed with that at several moments throughout the record – none more so than on Hang ‘Em Low (So The Rats Can Get ‘Em), a track that relies on some heavily inspired Marilyn Manson type moments. Filled with angst and nastiness but with a certain touch of gothic inspired hard rock there too. In fact, I feel Mantar would appeal to fans of Marilyn Manson, although the two artists aren’t that sonically inclined. The attitude and feeling is rather similar though.

For this new recording, it feels as if Mantar have spent a lot of time honing their song structures. Creating utterly infectious slabs of misanthropic mayhem that are far more melodious than prior works, without ditching the venomous attitude and spite in exchange for this newly discovered groove. At times, it feels as if the heaviness is an afterthought that was added to appease fans and to stick with the traditional sound the band is already known for. I wonder if we’ll see this and less as Mantar grow as a band.

The raspy tones to the vocals bring an interesting dimension to Mantar. A rhythmic sense of destruction and chaos that’s surprisingly pleasing to the ear.  There are a lot of different styles that are touched upon on Pain Is Forever And This Is The End, from hard rock and traditional heavy metal to goth rock and more mainstream radio friendly borrowings. At times, punk and crust influences seem to prevail, and there is always an underlying nod at the Seattle grunge scene, too. A sonic mish-mash of whatever element fit on the day the track was created. All these elements get glazed over and dragged kicking and screaming into the heavy, metallic realm – even if at times, it seems forced.

“I just knew I wanted to write stronger songs in relation to songwriting and rely less on being an extreme metal act that only convinces through a certain sound or general heaviness,” explains Hanno Klänhardt . “Don’t get me wrong, we still like to be heavy but the truth is neither Erinc Sakarya nor I are much of extreme metal musicians or fans. I mean of course there are several metal bands that I adore but for us the song always comes first. So I invested even more time on trying to write better songs, interesting structures and catchy tunes.” The results speak for themselves, with this being the most diverse and interesting Mantar album, taking things to the proverbial next level.

This begs the question; if you don’t like the genre, why play it? Why would you write heavy music if you’re not a fan of that sort of thing. What’s even more amusing, is that despite their self-admitted indifference to the extreme metal – they’re rather good at creating it. Ah the mysteries of the universe are many.

Some of the influence on Klänhardt’s songwriting this time came from the artists they covered on 2020’s collection Grungetown Hooligans II, which featured their versions of songs from the likes of L7, Mudhoney, Sonic Youth and The Jesus Lizard, formative bands from their respective youths. “With Grungetown Hooligans II we tried to pay respect to the music we grew up with and the musical background we are coming from. A lot of people said that these rock song structures suit us very well and I kind of have to agree,” says Klänhardt.

“Bottom line is we really do like simple and catchy song structures'” Klänhardt continues. “I appreciate songs that speak for themselves and bands that do not have to hide behind genre standards or sound or scene must-have’s. The songs on the record definitely feature more melody and I sing occasionally instead of only screaming like a maniac, following his instincts as to what would sound best and was entertaining for him to listen to. The record also features a variety of guitar tones, while in past each album would feature a single tone across all of the tracks.”

“For this new record I tried to tweak the guitar sound more according to each individual song and its mood. We tried to steer away from metal sound standards and more in a direction where you can hear different nuances in sound. I don’t mean to be disrespectful but we never were a part of any scene, therefore we don’t owe a certain sound to anyone,” states Klänhardt.

Copies of Mantar’s newest record, Pain Is Forever and This Is the End, are available for pre-order through this wee link here.