Every once in a while, a band will come along and lay waste to the ear drums. Enter Monolord and their fantastic new record, No Comfort. 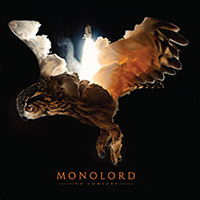 Lets face it, Toni Iommi has a whole lot to answer for. He was the one key factor that united all the different metamorphosis that Black Sabbath went through. This entire genre of Doom or Stoner rock, Fuzz rock – whatever you want to call it, it all stems from him. One man. Each new generation heralds its champion spawned of the great Toni Iommi, and the music continues to evolve. That modern day champion has emerged as Monolord. I, for one, plan to follow in a slow funeral dirge march to the ends of eternity.

Despite this being the fourth full-length from Monolord, it marks my first time hearing them – and I can tell you right off the bat, it won’t be my last. This is monstrous. Such an impressive wall of sound has been slowly melting my face off these last few days.

What I adore about this group, is their ability to keep their compositions seriously heavy, but so full of emotion too. The guitar work is top notch. All the fuzz you would expect from a band that reveals in this genre, and more. So much more. Throughout this record, there are great melodies and gut wrenching solos. They cut through the drone passages and transcend the trance into a fist pumping, head banging, good time. Seriously, I lost track of the times I found myself with my eyes shut, just slowly nodding along to the vibrations.

Despite having just six tracks, the album still weighs in at a whopping forty-eight minutes playing time. Of those, there are no filler. None at all. Each track has its merits although a few stick out a tad more from the pack. The opening slap of The Bastard Son lays down a heavy and mesmerizing repeating dirge that flows into, and continues, with The Last Leaf. The Ozzy-esque vocals only add to the amazing tone of the record. There is a riff that comes in around the three minute mark on The Last Leaf, and just floors me. Its everything I want in a riff, tightly rolled and slow burning. Although I stopped smoking weed many years ago; this one riff right here makes me question that decision. I could listen to this segment on repeat for days. And days. And days.

The third track, Larvae, starts off with an almost John Baizley (Baroness) sounding guitar part. Then it flows into a suiting follow-up to the first two tracks. Skywards starts off live a more down-tuned version of Black Sabbath’s “Lord Of The World”. See why I was talking about Iommi before? Yeah. Full circle. There’s no shame in that, and to illustrate why, allow me to quote Rob Zombie from the Nativity In Black tribute album’s linear notes. “Everybody knows that Black Sabbath started everything and almost every single thing that people are playing today has already been done by Black Sabbath. They wrote every single good riff…ever.” And right he is.

From there, we move into my two favorite tracks on the record. The slow, driving and pulsating bass lines of Alone Together. Then the monstrous  title track, No Comfort. Alone Together is far more down tempo than the rest of the album, and relies heavily on acoustic guitars and lets the vocals steer the ship for a while. There is a massive riff that swings in late in the song that starts that favorite part of the album I mentioned. From here on in, the emotion is amped up to eleven and the strings begin to wail. None more so than only the final cut. What a piece of wizardry we have here. It is a monolith of a song. Close your eyes and just flow along with it.

No Comfort is available to order from Relapse Records right now.  And if you’re into Doom, Sludge, Stoner or Fuzz rock – whatever tag you want to throw on this, well is as close to a perfect album as you’re likely to find. Buy it.